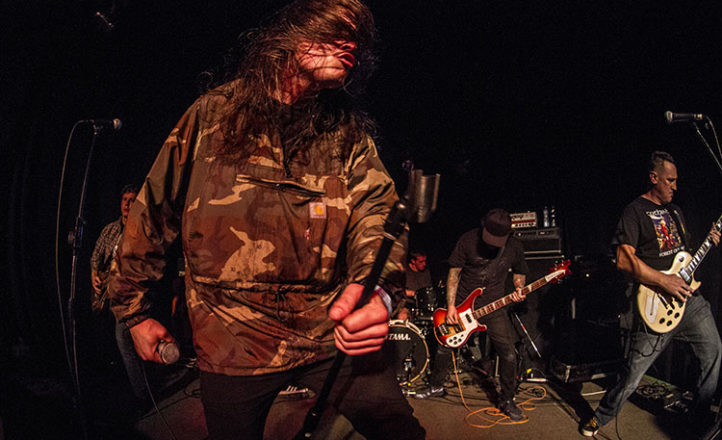 Winter is the perfect time for doom metal: it is dark, gloomy and cold. Tonight is no different, as Canberra’s finest descend on Sydney.

If you haven’t seen or heard Sydney’s Gvrlls before, than prepare for some of the most negative sounding sludgy hardcore imaginable. Discordant, dissonant sounds emanated from the five piece as they thrashed themselves around the small stage. If you ever get a chance to catch these guys, you won’t be disappointed.

Locals Sumeru produce a monster sound. The five piece pack massive riffs and a huge stoner groove into the half hour set with their sneering front man bringing a punchy growl. The small size of the Factory Floor afforded a cruisy vibe for the packed out room and a humongous sound for  the solid as fuck stoner grooves, so much so security had to tell multiple punters off for smoking doobies inside.
With supports like that, it would be hard to follow, but Canberra’s I Exist are the band to it. The small stage had the band feeling claustrophobic with the six members packed in, this just made the set seem like a solid ball of noise about to explode.
“Heal Me In Smoke” and the ginormous “Sorrow On Hill 105” absolutely slayed, guitarist Josh Nixon throwing the horns and his patented ‘doom claw’ at every available opportunity. “Black Unicorn” had a very rowdy group at the front lifting each other on their shoulders, and some very serious attempts at crowd surfing in the small venue.
The riffs coming from Aaron Osborne are enough to get the biggest fan stoned, as front man Jake Willoughby uses every available inch of stage to command us all.
Closing with “Atom Bomb Blues”, a dirty, lengthy affair, straight from the bowels of a demon, this is the kind of music we need – just pure, unadulterated sludge.