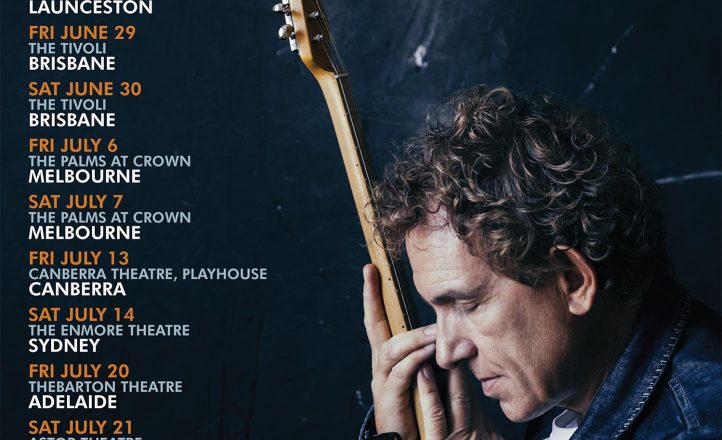 The influential Ian Moss has always had a knack for crafting poetic songs with a smoothly delivered, melodic vocal line. He also possesses a great aptitude for adding musical spices with tasty guitar work without detracting from a song’s initial vision. Whilst a capable virtuoso, his sense of restraint where applicable is prevalent across both his award winning solo work and within the vast and legendary back catalogue of Cold Chisel. To see him perform various classics alongside new material from his slightly overdue yet quite brilliant latest album Ian Moss, accompanied by a seven piece band was a real treat.

The success of the national theatre tour is testament to his lasting musical appeal and also to the strength of the new album’s songwriting. As the crowd tonight settled in for some musical warmth from Moss and band over two sets on a wintry evening, some veteran blues music played over the PA, setting the mood perfectly as the band took up their positions on the spacious stage.

Sporting a very nice light blue Stratocaster styled guitar, Moss and band opened the first set with ‘Cold in the Night’ followed by ‘Down Along the Track’, both from his latest album. Standing centre stage at his microphone and in front of his combo amplifiers, Moss’ soulful voice filled the venue and flourishes of guitar work embellished the tracks, the sound filled out by organist and keyboardist Clayton Doley.

Swapping guitars and alternating between tracks from Ian Moss and from Matchbook was a deft way to introduce new songs including the stirring ‘My Suffering’ which was penned by the late Steve Prestwich. Prior to that, ‘I’m Not Your Only Man’ and ‘Such a Beautiful Thing’ let the rhythm section of one-time Dragon drummer Kerry Jacobsen lock in with bassist Jonathon Zion as Moss again coaxed expressive, vibrato filled solos with moments of flash tempered with tasteful finesse.

Those recognisable octave guitar runs got a workout from Moss during ‘My Baby’. It also had the crowd singing along, extra vocal power from backing vocalists Lana Sayah and Michael Duchesne.

After a twenty minute interval Moss and the core of the band returned. Seated on a stool, Moss covered ‘Georgia on My Mind’ with additional organ followed by drum and bass as the stage became purple lit. The full seven piece band then gently played Cold Chisel’s ‘Choir Girl’ with Doley on melodica and keyboards.

It was then five piece mode for a definite show highlight, ‘One Long Day’. As the song picked up pace, intermittent white lighting columns added to the intensity of Moss soloing at stage right with his shadow stretching across the side of the Enmore. The guitar flourishes from Moss in the outro offered some spellbinding guitar work without being over indulgent. Chisel fans were beside themselves.

The second set was then completed with ‘Telephone Booth’ and the  massive hit, ‘Tucker’s Daughter’. As the crowd roared, the full band returned for a three song encore that began with two new album tracks. The final song was performed by the full seven piece band and was, naturally,’Bow River’, stretched out to allow for audience sing-alongs and to include various solos such as a powerful drumming section from Jacobsen. It ended with Moss letting rip on his guitar with utmost authority.

Over the space of two sets amounting to around two hours playing time all up and covering an impressive selection of material with a variety of influences throughout, Moss and his band were in sensational form. The respect and adulation for Ian Moss and his musical excellence is well deserved and tonight’s performance was no exception in adding to that legendary status.