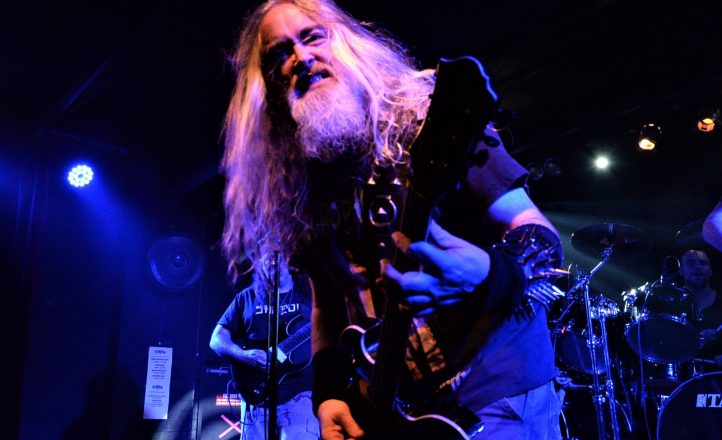 Sunday night saw a massive gig hit Leichhardt’s Crowbar, headlined by American death metal legends Incantation. Sydney’s own Golgothan Remains ‘from around the corner’ kicked off proceedings. Their set was convincing, powerful and tight; a well-oiled machine that provided ample room for both the instrumentalists and some keen vocal interplay between Matthieu Van den Brande and bassist Daniel Finney. Their set was short but memorable, comprised of tracks from their 2018 debut Perverse Offerings to the Void. Some sound issues couldn’t dampen the enthusiasm that their performance set for the rest of the gig.

Next up was Melbourne’s Eskhaton, who brought their own frenetic hymns towards Armageddon to an increasing number of punters. Their set was a complete whirlwind of ferocity, a more guttural take on death metal. Their set was a little short, but they managed to pack in tracks from each of their full-length albums, and the cuts from Omegalitheos made a particular impression on this reviewer, and provided a glimpse of where future recordings and performances may take them.

Following was Brisbane’s Laceration Mantra. Comprised of veterans of the Australian scene, their set was intense and focused. I appreciated that the sound issues had largely been sorted at this point, so their performance was error free. They’re only a trio, but they possessed a massive sound. Calculated and confident, they had the crowd in the palm of their hand. Their set comprised tracks from their two albums, and they delivered them with the hunger of a new band, a great sight to witness.

Melbourne’s Inverloch continued proceedings. Not having seen them since they performed as d.USK, I was especially keen to see how their own material would translate live. They did not disappoint. Measured, atmospheric and funereal, Inverloch brought a different kind of energy to proceedings, after a few hours of utterly solid death metal I appreciated the change of pace. Their set was amazing, carrying with it all the gravitas of their recordings. The only minor complaint I have is that the guitars, drums and vocals occasionally drowned out the bass lines. Regardless of minor faults, it was a pleasure to witness Inverloch culminate the Australian portion of the evening’s festivities.

All the way from Brazil came Nervochaos, bringing their brand of death/thrash to the Crowbar. At an early point of their set, vocalist/guitarist Guiller made mention that they didn’t mind if people were metalheads or punks as long as they were all there. I think that statement summed up Nervochaos quite aptly: death/thrash imbued with a punkish energy recalling the glory days of crossover. They’ve been active for over 20 years, yet their music has a modern feeling to it, perhaps because they chose to pepper their set with tracks from their newest Ablaze (released this month) which fit right in with the rest of the set. It’s a shame it’s taken them so long to visit these shores, but they more than made up with it with a spirited performance.

Fellow Brazilians Krisiun took to the stage after an extended changeover. There seemed to be some trouble getting everything in tune, which unfortunately ate into their set time. Despite the shortened set Krisiun delivered complete brutality. They’ve been a band long enough to develop that musical bond which is no doubt especially keen given their literal and figurative brotherhood. They ripped through their set which featured highlights from across their career, focusing on their latest album Scourge of the Enthroned as well as carefully balancing crowd favourites like ‘Combustion Inferno’ from 2008’s belter Southern Storm. Krisiun played like they had a lot to prove, and while it’s a shame that their set was cut short, they clearly left everything they had on stage.

Headliners Incantation soon took to the stage and laid waste to the crowd with a setlist that spanned across their storied career, featuring classic tracks such as ‘Christening the Afterbirth’, ‘Impending Diabolical Conquest’, ‘The Ibex Moon’, and a blistering performance of ‘Profanation’ to close their set. These were ably mixed among selections from their newer albums to the sheer delight of a rapturous crowd. Each member gave it their all, and John McEntee’s cavernous vocals and distinctive guitar playing were in particularly great form. After their set , Incantation departed the stage and greeted everyone in the front row of the crowd, a personal gesture no doubt displaying the reciprocal appreciation between the band and the crowd. It might also have been an indication that they plan to be back sooner than later.

This was a varied gig that ticked all the boxes for fans of death metal. There was a lot to enjoy even if there were some issues with sound and running time. The crowd was quite appreciative under the circumstances, turning from what was a scattered few groups for the first few bands to a decent showing come Incantation. It might have been on a Sunday night, but this was an excellent gig played to a ravenous audience.