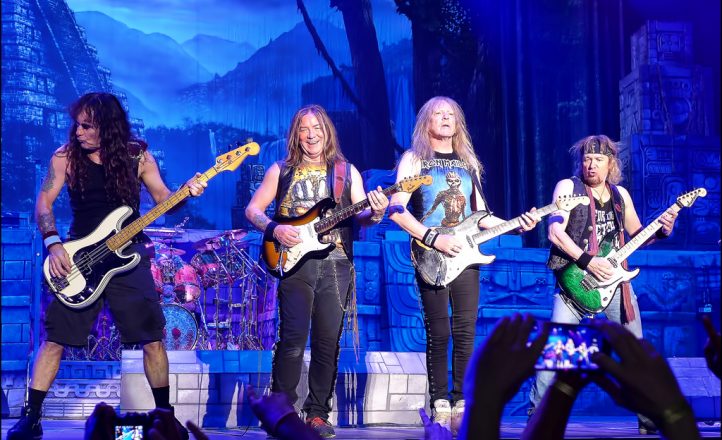 The pioneers of the heavy metal movement known as the New Wave of British Heavy Metal [NWOBHM] probably had no idea that some of them would still be touring globally over three decades later. Having weathered every scene change imaginable and endured a variety of sub genres, the mighty Iron Maiden has stuck to their guns and continues to fill arena sized venues. Australia missed out on many of the band’s tours for around fifteen years before their Somewhere Back in Time tour in 2008 broke the drought as it were. They subsequently returned in 2011 to headline the now defunct Soundwave on their Final Frontier tour. But it was this year’s Book of Souls tour that saw the nostalgia be less of a drawcard whereby their new material was enhanced by an impressive production that utilised an expanded stage set and a good dose of theatrics.

The support act of The Raven Age did not really grab the unwavering attention of the faithful Maiden heads and given the associated lineage within the band, did nothing to alleviate the nepotism accusation levelled at Maiden for their choice of support acts. However, ours is not to ask why so on the strength of their performance alone, let’s just say it felt somewhat contrived and packaged for easy consumption. They may well have just been into their riffs but the stage poses of them all leaning into their instruments repeatedly had an air of choreography to it. Still, amongst it were some decent harmony guitar parts and the odd catchy chorus. Maybe the younger crowd loved it but this old reviewer just felt there were other more deserving local bands that would benefit from the support slot, especially in such a faithful territory.

With the support out of the way, more fans strolled into the venue as the PA pumped out more apt tunes from various artists. Be it ‘Rocket’, ‘Still of the Night’, ‘Ram It Down’ or ‘Highway Star’, it was working a treat on setting the right mood with the crowd. As the house lights dimmed, the familiar tones of UFO’s ‘Doctor Doctor’ rippled over the PA. On the song’s end, the huge video screens on either side of stage and in front of the stage backdrop commenced a short introductory animated film with the band’s ubiquitous mascot Eddie up to his usual shenanigans only this time in a jungle setting befitting the latest album The Book of Souls’ themes. The Maiden plane crashes in the jungle whereby a big Eddie hand picks it out and pegs it, probably into a volcano, thus starting the stage performance with singer Bruce Dickinson appearing atop the mammoth stage set, above and behind the embedded drum riser, in a hood and invoking some ritual activity  before a smoking cauldron. ‘If Eternity Should Fail’ had guitarists Adrian Smith and Janick Gers offering some tasty leads within the song and the drum sound from the legendary drummer Nicko McBrain was spot on from the first song. As always, his affections for comic relief were never too far away either with his interactions with band members or by virtue of the ever comical Sooty puppet nestled happily on a bass drum.

The Mayan temple stage set included at least four pyrotechnics points which Bruce dodged and soon enough, having come down from the upper back area echelons of the set, burst back onto the stage during ‘Speed of Light’, jumping over sound reinforcement wedges. Harmony guitar parts soon kicked in as Janick performed one of many foot stretches for the evening on a nearby wedge. His unique style of stretches and guitar flinging added an entertaining visual aspect to his dextrous guitar playing. Soon enough, guitarist Dave Murray and band founder bassist Steve Harris joined the other mobile band members on the front platforms of the stage with stepping stones and floods of purple and blue lighting. Dave let rip some impressive soloing on his sunburst Stratocaster followed by Adrian on his Strat style Jackson guitar and Janick adding his parts whilst Steve’s galloping bass work thundered throughout. Bruce also dropped his first signature request for the crowd to scream for him, interchangeable at each city. Yep, tonight it was ‘Scream for me Sydney!’ and indeed they did. For the solo styles of the three guitarists, Dave is generally a more fluid player, Janick favours wide intervals whilst Adrian pushes sustained notes. Tonight, this was even more evident as each guitarist shone in their own way.

The first interlude of banter cheekily referred to the band’s legacy members potentially creating the new generation of younger fans in the crowd by way of introducing ‘Children of Damned’ classic. In other words, some material was that old, Bruce suggested it was an impetus for pro-creation that crossed generations based on the wide demographic in the audience. The crowd dutifully sand along. Next up, ‘Tears of a Clown’ was aired and dedicated to the late, great Robin Williams. Guitar heads may have also spotted Dave playing a sunburst tremolo arm fitted Les Paul guitar for the second solo but for all present, the tone was warm and pure. As the stage turned red for ‘The Red and the Black’ more quality musicianship became apparent including Steve’s bass parts taking precedence. Another taste of Bruce’s banter informed the crowd that the song was about the Red Baron and the Aussie rifleman who knocked him off.

As the backdrop changed to the classic artwork of ‘The Trooper’, Bruce engaged in the usual Union Jack flag antics, bounding about the stage in his Red Coat jacket and amusingly covering Janick showing that even at their age and level, they still have fun on stage and have some amount of spontaneity. ‘Powerslave’ then had Bruce with the relevant mask as the band paired off on stage before the Janick gymnastics show continued whilst flinging his guitar about yet managing to peel off guitar riffs. Video screens then filmed from the front of stage area before new album title track ‘The Book of Souls’ saw Janick playing an acoustic guitar on a stand, accompanied by Steve on bass. Naturally that led to a quip from Bruce referring to the string section with Adrian also on an acoustic guitar. Smoke machines then created a very cool looking stage set that allowed the entrance of a very scary looking and giant Mayan themed Eddie to run amok across the stage chasing Bruce and anyone else in close proximity, usually fought off with a guitar. Janick taunted the large ‘monster’ between Eddie’s legs but on the second tier of the set, Bruce confronted Eddie to wrestle his heart out [well, a suitable prop] to then take it over to the rear stage, elevated cauldron to burn it. The best Eddie ever then slinked off stage, defeated and literally heartless.

More pyrotechnics ensued to introduce ‘Hallowed by Thy Name’ as Bruce waved a noose dramatically then jokingly swung it onto Nicko’s cymbals as Steve mock machine gunned the audience with his bass. Bruce proceed to gee up the crowd for the chorus woahs after which Janick let loose a super-fast solo perching near the front of stage. ‘Fear of the Dark’ followed with Janick and Dave providing more solos as Bruce traversed the upper levels of the stage top deck, running back and forth yet still singing whilst running and not missing a beat. He is still running rings around kids half his age, almost literally plus appears at ease with band and crew, confident in delivery and continually professional. To finish the main set, naturally another classic track was trotted out, this time ‘Iron Maiden’, complete with harmony guitar parts with Adrian on a Destroyer styled guitar fitting to the era of the song.

A three song encore then delivered the classic track many in the audience were keen to hear; ‘The Number of the Beast’ during which an inflatable horned goat [or personification in line with the Dark Lord] with arms crossed appeared behind and to the left of Nicko’s kit. The Devil was swiftly deflated when pyro blasted at the bombastic end of the song. Janick’s guitar sound in melodic parts had a searing Strat tone. Lighting wise, there was an instance of red lighting in the drum kit embedded area whereas the rest of the stage set was all blue. Elsewhere, green lasers reached out into the arena across the crowd from atop the giant lighting rig. The next song of ‘Blood Brothers’ also used lighting but in a more subtle way and Janick’s melodic solo at the song’s end segued with Adrian playing the intro the last song of the night with ‘Wasted Years’ as the Best of the Beast artwork backdrop appeared. Some amusing antics between Bruce and Adrian included Bruce temporarily moving Adrian’s microphone away from him just before his background vocal parts, all done in jest of course. The song ended to the crowd applauding with enthusiasm as the familiar set closing tones of Monty Python filled the air.

Some fans may have wanted to hear a few more classic tracks but really, that was addressed with the 2008 world tour so other than that, there were no complaints for what was quite simply a sensational show. Iron Maiden played the concert of the year and given this reviewer paid to attend, there is nothing to be sought in saying that. Maiden are one of the best live bands on the planet and when they eventually do hang it up, there will not be anything quite like them ever again.

The Number of the Beast
Blood Brothers
Wasted Years