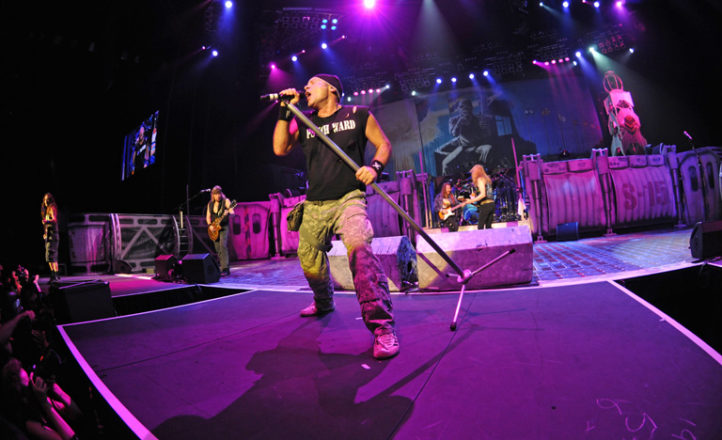 With approximately half the audience still filling local bars or crowding the merch stalls, Rise to Remain opened tonight’s show, the second of Iron Maiden’s warm-up performances ahead of their Soundwave Festival appearances. Looking every bit like his father’s son, Austin Dickinson led his young troupe through some energetic if fairly standard metalcore. As much as they’ve played the past two years, Rise to Remain still has some way to go to really develop their own identity and looked a little self-conscious on the vast Entertainment Centre stage playing to almost no one. Nevertheless, they fared much better than Maiden’s openers on the last Australian tour (Steve Harris’ daughter Lauren and the awful emo band Behind Crimson Eyes).

Midway through Iron Maiden’s set, Bruce Dickinson acknowledged that tonight’s audience – unlike the massive sell out tour two years ago – was mostly the band’s old faithful, the die-hards who didn’t come along just to hear the “hits”. Which was just as well for them. Fully half the set was drawn from the band’s post-2000 comeback era, none of which had ever been played to an Australian audience before. But that didn’t seem to matter, and it was great to see that a good majority of the crowd were able to sing along with the five Final Frontier tracks that were aired, four of which made up the first five songs of the set. Of those, the opening salvo of “The Final Frontier” and “El Dorado” got the warmest response as Maiden burst onto the stage but when the introductory riffing of “2 Minutes to Midnight” was unleashed, a massive roar like 9000 people going “ROOOAARRRRR!!!” almost drowned out the band.

“The Talisman” seemed like an odd choice to follow that, but as perhaps one of their most technically demanding songs I could understand it being played so early. This one seemed to split the crowd a bit, but the band of course pulled it off. “Coming Home” was an early highlight, and “Dance of Death” is a much better song live. One of the biggest reactions, however, was reserved for “The Wicker Man”, a clear sing- along favourite being played in Sydney for the first time with the crowd almost lifting the roof off and the band reponding by pulling out every stop.

Unlike the previous tour, Dickinson only got into costume once, for the always ball-tearing “The Trooper” during which he must have run at least a mile waving two Union Jacks. Yet again, as usual, he proved himself to be metal’s – indeed, one of the entire rock world’s – consummate frontman. He engaged everyone in the crowd, pointing out sections for special attention, offered his “Scream for me, Sydney!” rally cry several times (not as often as last time though, thankfully) and always has something poignant, interesting or funny to say. He made jokes about Shane Warne as he tossed a pink bra into the crowd from where it had (apparently) come. He talked about playing in Singapore and in Indonesia, in front of Islamic “metal brothers” who don’t care about race or religion when they’re rocking out to Maiden and in a gesture that caused one of the biggest cheers of the night, dedicated “Blood Brothers” to our cousins suffering from the earthquake disaster in New Zealand. And he never stopped moving. Nor did guitarist Janick Gers, whose crazy dance steps and rubbery contortionist moves when he slips into his own zone are as much of a spectacle as the singer’s exuberant athleticism.

For their part, the rest of the band were hardly boring to watch either, for without a lot of extravagant props and flashy stage effects, Iron Maiden relied on their music and natural showmanship to keep the crowd engaged as the back half of the show was filled out with more familiar songs like “Fear of the Dark” and “Iron Maiden” that was, of course, the cue for a giant red-eyed alien Eddie to prowl the stage and engage in a guitar duel with Dave Murray.

“The Number of the Beast”, “Hallowed be Thy Name” and “Running Free” were reserved for the encore, the second of which not only got the greatest cheer of the night but left me both with no voice and a very clear understanding of why I and thousands of others love this band so much. Iron Maiden were truly outstanding tonight and if anyone went away disappointed that they didn’t play “Run to the Hills” then they should kill themselves.