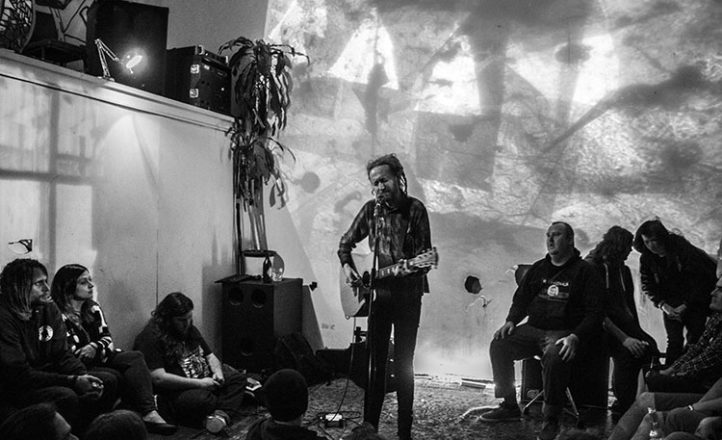 There comes a time with many bands when the vocalist feels that it’s time to whip out the acoustic, pen some songs and give the solo show a shot. Sometimes it works ala Chuck Ragan (Hot Water Music), Tim Barry (Avail) and Dallas (Alexisonfire). Sometimes it’s best left in the bed room. Gerard Way being a prime candidate. And then there is Jay Whalley, who takes the acoustic solo effort and does it his way.

Well known as the long haired yahoo from Frenzal Rhomb, Whalley is also pretty handy with an acoustic, able to string together a few chords for some rousing and sweet renditions of Frenzal classics, as well as a sprinkling of covers and originals. The small room at Rad bar was sold out, people were spread out on the floor and on the stairs, beers or wine in hand.

A smooth version of “5000 Cigarettes” serenaded the crowd, some singing along, others inclined to sit and take it all in. “Bird Attack” has never sounded more Australian and a wonderful tale about a show in Newcastle in which he welcomed his wife to the stage, only for her to give him shit for it, led into a track about meeting in the parking lot of Coles.

The highlight of a gig like this is not only the intimacy of the setting, but it’s the insight into songs that we get to hear. Who knew that Limp Bizkit’s “Nookie” is actually a song of Fred Durst’s pain at having “his girlfriend fuck all his homies, and try and justify it by saying he did it all for the nookie. No, this man was hurting”, and with the audience helping out with the refrain of “ass”, to close out the set Jay gave the best rendition of a Limp Bizkit track since, well, ever.