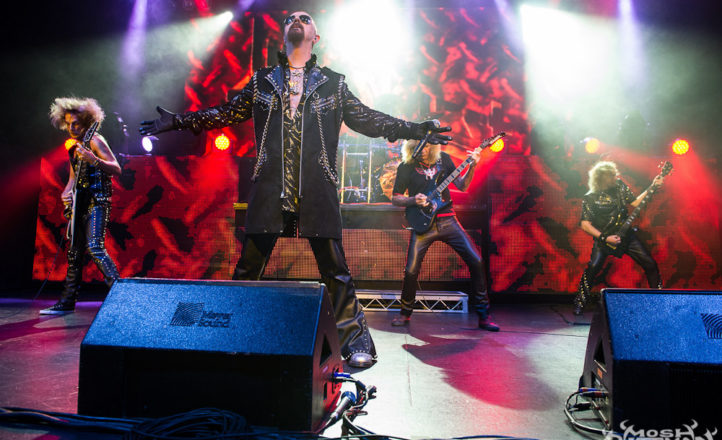 When Judas Priest last toured Australia seven years ago, their performance was apparently so lacklustre and turgid that even diehard fans who probably have the band’s trident-like symbol tattooed on their dongs were left underwhelmed. So while there was still a high level of excitement the British metal titans were again in the country, some may have been wondering if it was going to be worth the 100+ bills the tickets were going for. In the end, no one should have been concerned.

DragonForce stormed the Enmore first with the unbridled energy that seems to inhabit the very core of their being. ‘Fury of the Storm’ swept all before them with Herman Li, Sam Totman and Vadim Pruzhanov – wielding his keytar – melting the faces off everyone in the place with the insane speed of their playing that seemed to get only faster as their set progressed. Most of the rest of the set came from their last two albums, highlighting the stronger range of Marc Hudson’s vocals and giving their performance a more diverse edge, especially with the inclusion of ‘Symphony of the Night’. The impossibly off-the-hook ‘Through the Fire and the Flames’ closed their set with a speed and energy that the headliners simply weren’t about to match, but music isn’t a competition.

Black Sabbath’s ‘War Pigs’ was the cue for the lights to go down once again and as ‘Battle Cry’ descended on the crowd Scott Travers led Judas Priest to the stage, counting them with in booming kicks. The Enmore is in full production mode, the stage wall-to-wall and floor-to-ceiling with LED screens roiling with fireballs and flame as Judas Priest rip into ‘Dragonaut’ from Redeemer of Souls as an opener. With most of the band lurching toward their 70s, recent recruit Richie Faulkner — whose remarkable physical resemblance to KK Downing isn’t lost on the crowd — injects a youthful spark, sharing the soloing spotlight that has for so long been Glenn Tipton’s alone. Into ‘Metal Gods’ and Rob Halford is in top vocal form as he stalks the stage in his trademark leathers with the audience in the palm of his gloved hand. Faulkner is off the leash for most of the set, pulling moves and guitar shapes befitting one of the world’s most legendary metal bands. As ‘Victim of Changes’ sprawls out, Halford revels in the opportunity to prove he is still no slouch when it comes to high-end screams and the Enmore joins in with full-bodied roars of their own.

Just like the screens behind them, Judas Priest is on fire tonight and while the set-list steers clear of any real high-end stuff there are still plenty of gems. ‘Beyond the Realms of Death’ allows each member to shine, ‘Turbo Lover’ and ‘Breaking the Law’ gets the entire room singing along and the roar of engines fills the theatre as Halford rides in on his gleaming chrome machine for ‘Hell Bent for Leather’ to close the main part of the set. The encore features a rousing version of ‘You’ve Got Another Thing Comin” with Faulkner grabbing the spotlight with an epic extended solo in which he throws Downing-like shapes all around the room. The final hammer came down on the night with ‘Living After Midnight’ taking a turn into ‘Defenders of the Faith’ as, in front of a crowd that included Billy Corgan, Marilyn Manson, Dino from Fear Factory and everyone from Exodus, Judas Priest proved themselves to be the epitome of a live heavy metal band. A far cry from the disappointment of 2008, they were on the very top of their game tonight. Defenders of the faith, indeed.