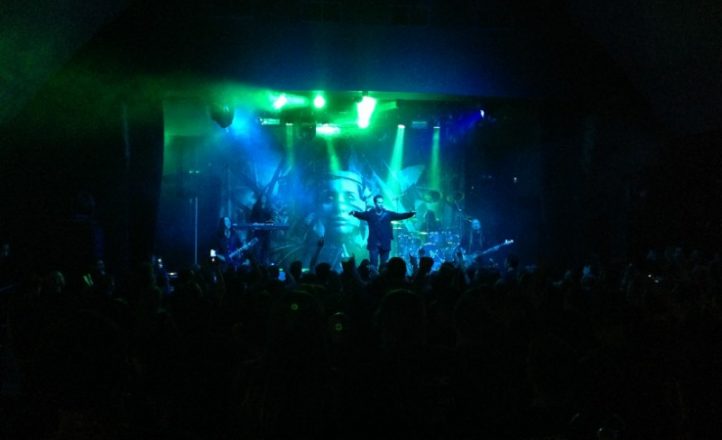 Kamelot are a touring machine. The band is now more in their element as a more synchronised unit and the camaraderie is clear. Guitarist Thomas Youngblood is the mastermind behind the band however Swedish vocalist Tommy Karevik has developed his stage presence substantially with the entire band looking far more relaxed and in command of their material on this second visit to Australia.

Starting off tonight’s show was four piece Wollongong metal band Saralisse. Sporting cut off denim and using stage banners adorned with Tolkien inspired folklore, their look was very much in tune with the power metal aesthetic. Galloping guitar rhythms kicked along against chant like singing with additional guitar solos on pointy guitars. Between song banter included such hilarity as offering to smote one’s enemies on a battle adventure. They did a pretty decent job at getting the audience going and possessed some solid grooves within their songs as well as understanding song structure such as the use of bigger choruses against sustained chords.

Brisbane’s ‘epic metal’ band Valhalore were up next and the six piece made good use of the limited stage space as the Kamelot’s The Shadow Theory album artwork backdrop loomed over their set illuminated in strong blue lighting. Instrumentation was impressive with the use of a lute and flute on the opening track, setting up an interesting sound against the standard heavy metal arrangements that soon delved into hints of thrash and death metal.

Twin guitars, windmilling hair and harmonised guitar solos were the order of the day as the song’s pace picked up. Crowd hand clapping led into heavier sections before ‘Upon the Shores’, a tune about drinking, included some flute against growled vocals and fast paced metal. Guitar solos were intricate at times and using Perth made Ormsby guitars added an interesting look but all band members were in folk based leather costumes so they had gone to some effort to look the part.

Audience participation was not a problem as heavier material let the mosh pit try out some Wall of Death antics. After that, a couple of slow acoustic tracks starting with ‘Solace’ saw some band members seated and following suit, the crowd sat on the floor, cross legged. As the acoustic guitar was spot-lit the song then grew to include the band with additions of piccolo and recorder as more twin guitar sections were played. The final song had the crowd holding their phones aloft followed by some joining arms to kick their legs in a synchronised jig as floor toms were hit whilst band members twirled on stage. It was all very entertaining. They’ve got a good direction or angle that audiences seem to enjoy.

The baffles now gone, the stage set had better clarity as the backdrop promised the headline band. Youngblood and the hoodie sporting Karevik garnered most of the applause as they launched into the heavy tones of ‘Phantom Divine (Shadow Empire)’ from The Shadow Theory. The audience raised their hands in unison as smoke bomb pots at the sides of stage gave that indoor pseudo pyro vibe. Joined by the suitably black attired Lauren Hart with fashionable belly exposure, the band were in perfect form with a twin vocal attack. Hart then left the stage and the roaring ‘Rule the World’ from Ghost Opera followed, with enthusiastic audience singing along.

Haven track ‘Insomnia’ saw the guitarists prowling around the stage then brisk solos from Youngblood and Palotai with blue spotlighting and as the crowd continued with fist pumps, red laser arrays filled the stage. ‘The Great Pandemonium’ showed the band in tight focus with Karevik’s vocals incredibly strong and a fast, melodic and expressive guitar solo from Youngblood. It was an early show highlight embellished with very impressive drumming and crash cymbal work as the song almost became double time during which Tibbetts was windmilling furiously. The catchy power metal feel of ‘When the Lights are Down’ from earlier album The Black Halo offered some heavier material as the snare punctuated the chorus.

Three tracks from Haven were played next, commencing with the slightly more keyboard and vocal based track ‘End of Innocence’ which utilised a powerful chorus and both pre-recorded and live backing vocals for additional push. It flowed nicely into ‘Veil of Elysium’ that included more powerful double bass drum drumming, soaring vocals a thematic guitar solo plus a clear bass sound hammering through the live mix. Their use of technology allows them to free up stage space and move around more easily to interact with both the audience and each other. The vocals and piano ballad of ‘Here’s to the Fall’ allowed the rest of the band a quick rest before the stage was then red lit again with Hart returning for the next two songs.

Kamelot’s classic ‘Center of the Universe’ had the audience singing away as Youngblood added jovial flair with some overhand guitar harmonics and mouthed the chorus lyrics whilst Landenburg smashed his cymbals judiciously but effectively. After Youngblood’s quick guitar solo, Hart, now in a black jacket with gold shoulder tassels, moved from the back riser to join Karevik and sing in harmony at the front of stage under blue lighting. Hart then sat at the foot of the riser to introduce the Eastern tinged ‘March of Mephisto’ with growled vocals. As the song progressed with the again temporarily hooded Karevik, Hart provided an evocative delivery of singing, making the devil horns hand signals, windmilling her long hair and leaning back on the riser to sing with conviction.

Playing straight into the title track of Karma provided the earliest material Kamelot played this evening, harking back to 2001. It sounded fresh with a full sound from the band and seemed to sit perfectly next to ‘Amnesiac’ from the latest album.

A musical interlude was provided by Palotai and Landenburg with piano skills and fast crossover drumming skills respectively. Landenburg’s cymbal skills, double bass drum and rolls speed was excellently delivered with a fast call and response section endearing him to the audience.

‘Sacrimony (Angel of Afterlife)’ from Silverthorn benefitted greatly from the presence of Hart whilst Karevik again demonstrated his well-earned front man status in both vocal range and projection. Plenty of interaction from Youngblood saw him playfully doing visual missing plectrum tricks during his guitar parts. ‘Burns to Embrace’ from the latest album showed the band’s sonic spectrum ranging from heavy, down-tuned metal to searing melodic guitar parts and harmonised vocal lines.

Of course, the main set closing track of the slow burner ‘Forever’ showed Youngblood’s tasteful introduction referencing the chorus part before the audience sang back the melody to Karevik who jokingly grabbed a fan’s phone to then take various pictures of band members whist singing along. Band member introductions plus some call and response singing humour from Karevik ensued before the song flow returned to the chorus and a circle pit of sorts erupted. The main set completed and done with such professionalism saw the audience responded with a chant.

Karevik led the charge throughout but the combined chemistry with the entire band, especially with Youngblood and also with Hart was great to witness in a live setting. Kamelot delivered a cracking live show. Hopefully they will return here soon as they are certainly worthwhile to see live.