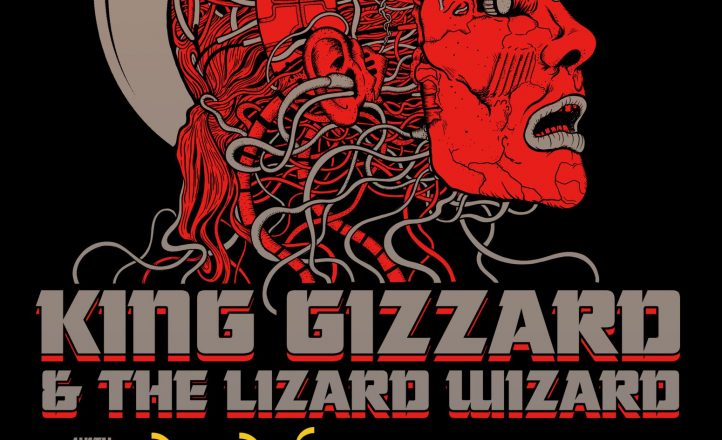 Bitch Diesel took to the stage in black hooded cloaks, instantly commanding attention. By the second song they had been whipped off to reveal sequins, bright colours, and an incredible one-armed jumpsuit. The Melbourne three-piece cast a spell with their witchy lyrics and sludgy rock’n’roll. Would love to have beers around the band’s cauldron one day; Bitch Diesel are lots of fun.

Another Melbourne act, four-piece Mildlife, were up next – and they continued the enchantment. Their shimmery, funky deliciousness conjured images of lying by lagoons, eating Frosty Fruits, and wearing cool sunglasses. The crowd was mesmerized by the long jams, swaying and cutting shapes while staying transfixed on the band. If you ever crave a quick squeal from punters, bring a flute out on stage. The addition of the woodwind instrument made the crowd erupt with delight.

A great set; can’t wait to catch these guys again.

After the witchcraft and illusions came the real wizardry. King Gizzard & the Lizard Wizard dived into their set with fantastic, frenetic energy and incredible precision from the first second. The audience fed off their vibes, and a large circle pit opened up, taking up the majority of the floor. Graphics on the screens were hyper in both colour and nature, adding to the intensity of the show. Magnificent lights sprayed colour everywhere, which made for a spectacular setting for ‘Cyboogie’ in particular, everyone grooving along and truly feeling the music. Several punters strutted around with ice-filled Chux wipes applied to split heads, cut eyes, and semi-concussions – but injuries aside, they all got lured back into the pit for more beer-soaked, sweaty fun.

It was so entrancing that at one stage the whole crowd voluntarily got down on the floor with no prompts, then jumped back up (almost) in unison – we as snakes, King Gizz our magnificent, musical charmers. Mildlife’s flautist was summoned on stage, and was again met with a rapturous applause, for a tremendous flute jam during ‘Muddy Water’, the last of several tour debut tracks for the evening. The Gizz have really been mixing up setlists this tour, with each night getting different tastes of their extensive discography.

Ears were treated to many heavy jams from upcoming fifteenth album Infest the Rat’s Nest (due out August 2019); their thunderous perfectly timed double drums rocking us to the core. ‘Planet B’ brought out our inner headbangers, and ‘Self Immolate’ – holy fuck, what a track! As I was fighting the urge to raise my horns I overhead a punter say ‘Well, I don’t need to go to Metallica now’.