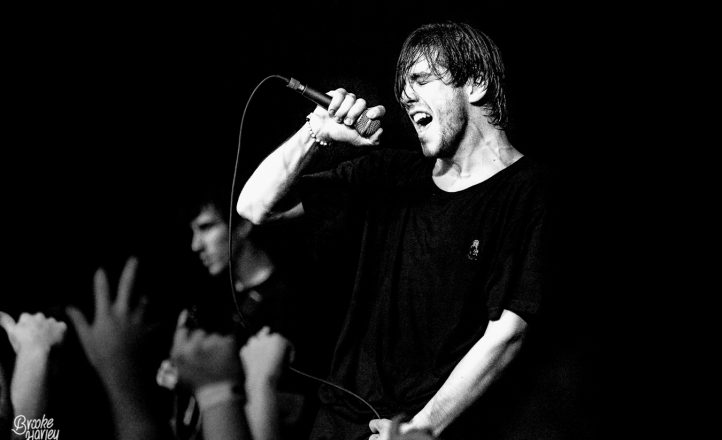 Factory Theatre, Marrickville NSWJanuary 14, 2017
I swam through a sea of band shirts into the Factory Theatre for a night of pop punk gold. Baby-faced Brits Roam burst on to the stage oozing energy. They smashed through their tight set to a pit of adoring fans. We got a good chunk of latest LP, 2017’s Great Heights & Nosedives, and I was surprised by how many songs were met with beautiful singing from the punters. We were also treated to great banter (mostly drop bear related), a backflip from frontman Alex, and witnessed instant karma in action when a stage invader snatched the mic, then dived into the mosh, and immediately ate floor. Mate, if you wanna be on stage, start a band.

After being perfectly warmed up, we were hungry for more. Chicago’s Knuckle Puck, here on their first Aus headline tour, then took to the stage. Opener ‘Double Helix’ was loud and punchy, and set the pace for the remainder of the show. The five piece checked in on the well being of the crowd regularly and offered pearls of wisdom along the way (e.g. “be a good fucking person”). They were obviously stoked to be here, thanking us many times throughout the set. A huge cheer erupted at the mention of second LP Shapeshifter, and the new material was fantastic live. During ‘Wall to Wall’, vocalist Joe Taylor requested we jump, and the whole floor did in unison. Circle pit after crowd surfer after circle pit, those on stage and off did not stop.

The same guy got on stage AGAIN and took over the microphone AGAIN; at least he knew the words. He was embraced by the band though this time… didn’t stop him from a repeat horizontal landing on the floor, though.

KP’s performance style is much like that of their lyrics; urgent and honest.
The passion on and off stage was lovely to witness. They sure have some dedicated fans, and feed off this energy. Personal favourite ‘Gone’, ‘Stateside’, and ‘Give Up’ were big singalongs. A set highlight was Roam’s Alex joining in on vocals during ‘No Good’, a double delight of for fans of both bands. An excellent taste of the new wave of pop punk rolling through. The future of the genre is looking bright!