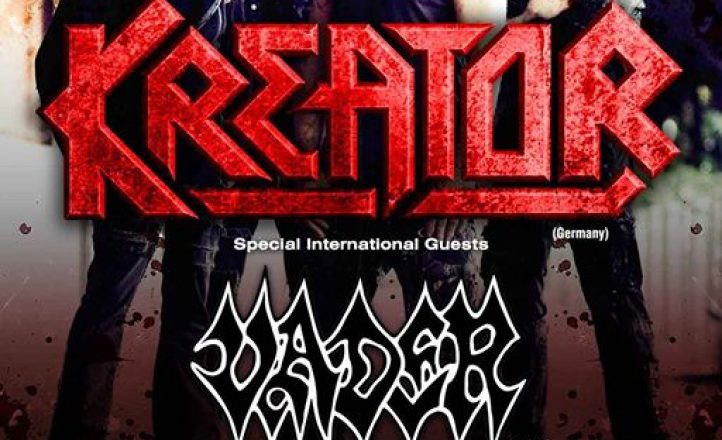 Kreator have consistently offered up great live performances in Australia on every visit here since they started adding us to their tour cycle back in 1993. Not surprisingly, tonight’s show was sold out and judging by the big queue outside the venue before the doors opened, the support slot was also going to have a substantial audience and deservedly so.

Sydney five piece Daemon Pyre started things off as singer Sam Rilatt, with requisite war paint, let rip with his guttural growl. The band opened with ‘Misanthropic Parallel’ from their self-titled 2015 album which offered up much of their set this evening. A slow, building guitar solo from lead guitarist Andrew Lilley added contrast to the melodic death metal which also included musical interludes, breakdowns and a catchy melody line amongst the feedback enhancements.

‘The Usurper of Hope’ had a very Sepultura feel to it, ‘Darkened Perceptions’ offered a heavier feel with crashing cymbals from new drummer Simon O’Malley, down tuned riffs hammered in unison by guitarist Simon Tattam and bassist Matt Seckold. A subsequent track was dedicated to the late Mick Burke of Mortal Sin fame to the receptive audience with new song ‘Unto a Dying World’ from Daemon Pyre’s upcoming second album, really getting the circle pits underway. Plenty more blast beats were heard in ‘The Veil of the Martyr’ after which ‘Defeated’ was the final song for the set offering up quick, almost groove metal elements and harmony parts embedded deep within the fast paced onslaught.

Next up were Poland’s death metal veterans Vader and given the venue was now suitably packed with eager punters, plenty were keen to see this band’s return performance. Appearing on a smoke filled stage in brutal leather and studs gear to match the aggressive, blood red, pointy guitars, their set was an unrelentingly fast and loud affair with minimal banter from the stage. Kicking off with ‘Wings’ from Litany, bassist Tomasz ‘Hal’ Halicki windmilled his hair in unison with front man and guitarist Piotr Wiwczarek as he peeled off fast tremolo styled rhythms and a very early Slayer styled guitar solo full of screaming whammy abuse. ‘Triumph of Death’ from the more recent Tibi Et Igni continued in that manner but also allowed lead guitarist Spider Pajak to unleash a barrage of speedy guitar lines.

Playing a couple of songs from their latest album The Empire saw faster soloing and thrashy death metal. Material from their first album The Ultimate Incantation was also given a run with ‘Dark Age’, ‘Chaos’ and ‘Decapitated Saints’ all getting an airing chock full of more powering, galloping death metal drumming and wailing guitar solos. Some brief respite came with the slightly slower ‘Send Me Back to Hell’ from the latest album but the set closer of ‘Cold Demons’ was a fast, rhythmic pummelling that took no prisoners. Job done, the tongue in cheek ‘Imperial March’ played over the PA as the band thanked the audience having copped a hiding in one hour flat from one of the more brutal death metal live sets this year.

As the stage cleared for the mighty Kreator, it was clear they had a festival ready stage set which was cleared of anything superfluous and using the latest available technology to travel light. Tonight’s set promised a wide and varied set list with a huge discography to cover so it wasn’t long before the introduction of ‘Choir of the Damned’ from the veteran classic Pleasure to Kill came blasting over the PA as punters filled the room.

The band strolled on and quickly launched into the title track from Hordes of Chaos, Mille Petrozza peeling riffs off this flying V guitar and barking vocals while Sami Yli-Sirniö played a fast solo the end with some whammy bar antics to add some flash to proceedings.  The next song, ‘Phobia’ from the often neglected Outcast album had drummer Ventor producing some pummelling thrash beats with quick cymbal work while bassist Speesy Giesler added immense bottom end to the paint-strippingly loud live sound. Of course, the tour was in support of Gods of Violence so ‘Satan Is Real’ and the title track followed.

Old school thrash fans were rewarded with a ‘People of the Lie’ from Coma of Souls delivering driving thrash that continued with ‘Total Death’ from their debut. The fast barrage of thrash with some perfectly executed time changes soon had a circle pit request being obeyed with enthusiasm. The pace changed temporarily as the stage briefly dimmed for the ‘Mars Mantra’ acoustic instrumental piece introduced Phantom Antichrist’s title track. That song’s quick burst thrash and tightly filtered aggression was interesting to compare to earlier classic material.

‘Fallen Brother’ was also dedicated to the Mick Burke. After this, Petrozza called for wall of death in his own, theatrical style, to ‘turn the place into a massacre’. Contained carnage ensued.

A few tunes later, Petrozza invoked a chant in response to his Kreator allegiance speech that celebrated the loyalty of his fans over the years. Next up, the title track from Extreme Aggression carried the torch for more fast, drum blasting thrash including a relentless double time part for the verses. Similarly, the main set closer of ‘Civilization Collapse’ from the more recent Phantom Antichrist release had more double time, super-fast thrash plus guitar solos.

While Kreator did not play ‘Betrayer’, ‘Tormentor’ or ‘Flag of Hate’ this evening, the set was a rich, wide, varied representation of an influential thrash metal band with a huge back catalogue that continues to write, record and perform solid material globally. As old school thrash metal fans and new fans alike were satiated with the show, it was clear that a return tour would likely continue to bring out the hordes of metallers to see Kreator again and again.