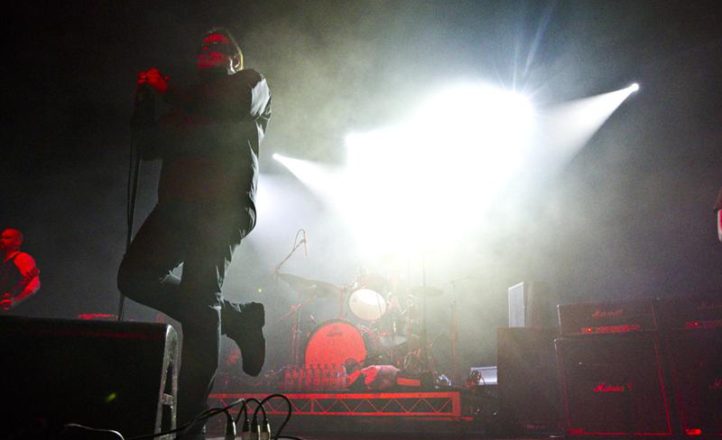 For a Sabbath influenced American stoner rock band that formed in 1989, toured with some of rock and metal’s biggest names, broke up in 1995 and then effectively reformed to a certain extent you have to wonder why it all fell apart. Kyuss decided that they were over not long after releasing a widely acclaimed album. One of the original members was none other than Queens of the Stone Age front man Josh Homme who eventually ousted another Kyuss member from the aforementioned musical juggernaut in the form of unpredictable bassist Nick Oliveri. Funny thing it is then that a reunion of three quarters of the band is selling out shows globally. Bruno Fevery replaces Josh on guitar duties and does it with some serious tone. Fact is that all members have their own side projects to consider so whether or not this reunion exists to assist vocalist John Garcia’s solo explorations is not clear. So what, the heritage of this band that once toured Australia in 1993 as a support for Metallica remains intact and so it was that a massive crowd descended upon The Big Top at Luna Park to cop some desert tunes.

On approach to the venue, the beer queue was an indicator of the crowd. Well, partially. Once in and venue lights of red, green and yellow had the odd punter awake, it wasn’t long before that waft of a celebrated funny cigarette was permeating the minds of all.

Support act Tumbleweed are not exactly fresh out of Wollongong. In fact, I seem to recall seeing them support the Hoodoo Gurus so called farewell tour. Still, all other shows are supported by hard rockers Fort. Starting off with “TV Genocide” and then bouncing into “Mary Jane”, the weed was in good form. Even a guitar solo with feedback had front man Richie Lewis straddling and swinging around the mic stand. Fairly soon, he was moving around holding the mic with elbows high.

Casual stage banter introduced the wacky walking bass lines and the odd crunchy guitar effects. The Dylan quote of ‘Everybody must get stoned’ whilst staring at a beer queue was a little bit odd, as was the slightly muddy mix in parts. Stage set up included some retro gear including a nice silver Hagstrom guitar, no doubt Ramones-inspired. Some tune up noises between songs didn’t help the professional angle but once the descending doom, ominous riffs and wailing vocals kicked in, fans of anyone from Sabbath to Cathedral and Trouble would have been happy.

Of course, something has to stuff up so the very heavy and sometimes psychedelic sounds for the song “Carousel” ushered in a temporary PA failure. The band appeared oblivious to it as Lewis was soon astride one of the amp stacks. Once the old age triple j fave of “Daddy Long Legs” was played, nostalgia erased that hiccup with the great walking riff and slower, more unrestrained chorus. It was a full stage with white light when they closed with “The Healer”, embellished with a hint of an undisclosed hotel story.

All up, Tumbleweed was sludgy, faster, heavier and simply played an amped set.

Between changeovers a quick wander reveled that the top floor was also packed with bodies and grog queues were moving at a glacial rate. The venue began to heave with the masses as yet again the odd pre made ciggie wafted a distinctive odour. Meanwhile, the stage set up revealed a few Marshall half stacks and a couple of bass amplifier stacks with a central yet very basic drum kit.

A guitar tech tuned up a lush black Gibson Les Paul guitar the ended up being used for most of, if not the entire, gig. The crowd mix looking on was interesting. It ranged from metal heads and rock fans to the hip crowd that regards QOTSA as the pinnacle of rockdom. By this point, any camped out stage views were invariably impaired by inconsiderate wankers pushing in front as the usual gig debacles of jostling for a position unfolded amongst tempers waning.

So it was that Kyuss Lives!, as they are now known, began their set, opening with orchestrated music and lights. Bassist Nick Oliveri and guitarist Bruno Fevery started things off as Brant Bjork attacked the cymbals. It took a while as the atmosphere grew, but a big cheer welcomed vocalist John Garcia striding on stage in a jacket, jeans and dark shades. It was straight down to business for a band that is visually not that great but can unleash more of a sonic appreciation. As the wah pedal guitar solos hit and that smell became apparent, it was more about the vibe and feel than back announcing songs titles or celebrating production values. Several songs in, as the white light engulfed the stage, the guitar riff welcomed the classic “One Inch Man” as the bass put in the melodic riffage icing on the cake with the high register segment within the song. Adding the strobe light effects, background bassist vocals and rhythmic guitar stabs, the lighting accented lyrical sections. They know what they are doing even as smoke machines billowed and the next song’s thumping opening guitar riff before the full band kicked in revealed a very tight live band. A certain Rolling Stones and blues feel exists next to the barreling riffs, bluesy licks and stage lighting. Simple always works best.

Soon John had the sunnies off as the rhythm section took off again with their headband adorned drummer possibly channeling Led Zep’s John Bonham. As a very 70’s guitar solo then pushed down into riffs, the crowd loved it whilst the huge beard of the bassist had others looking on curiously. A partial instrumental segment was trotted out until blue lighted stage welcomed the vocalist’s return and full band playing. Amongst a bass change and wah guitar soloing, differently timed crescendos on chord stabs roused the crowd. So, the driving groove rock and riff-based funk mixed climbing guitar blues solos and drum rolls all in evidence to varying amounts in songs like “Asteroid”, “Odyssey”, “Whitewater’  and “El Rodeo”. In other words, song dynamics ranged from slower sections into powering riff jams.

Bjork opened the first encore before another tasty guitar solo and further band interactions focused on one chord with Garcia repeating the line “It’s alright”.  More lighting changes and riffing soon had Garcia crouched at the front of stage. By now, the hair was out and a surfing sleeveless t-shirt was on view. That maybe a bit choreographed but the full light up of the crowd back to swinging mounted stage lamps showed they were just having a bloody good time. Some might have argued that Fevery played Homme’s stuff exactly and even with flair. But overall, the band had the whole detail of the songs, the tone and the pure confidence to work the set.

Not surprisingly a second encore hit with “50 Million Years Trip” and the groovy drumming before the half time slower breakdown. We sadly did not get an airing of “Demon Cleaner” given the end of course was the brilliant “Green Machine”. That one hit with the crowd over the moon as the solid attack and groove highlight capped off what was close to a two hour set. The Kyuss Lives! skill is with finding a riff and milking it into a hypnotic trancelike rhythm figure. Maybe the amount of strong odours around helps but the key is using simple, not overly thought out ideas to concentrate on a groove or feel then branch out. The reunion that started off as a tentative bunch of shows turned out to be high demand tour and whilst not all key members are involved, Kyuss Lives! appears to be rejuvenated which is something Tumbleweed can relate to given their history locally. Even with individual album projects underway for Kyuss Lives! members, there still will be new material from this version of the band. It may be a while off so plenty of people took the time to savour the tour. This show was pretty special.
Molten Universe
Gardenia
Hurricane
One Inch Man
Thumb
Conan Troutman
Freedom Run
Asteroid
Supascoopa and Mighty Scoop
Fatso Forgeto
Odyssey
Whitewater
El Rodeo
100 Degrees
—
Spaceship Landing
Allen’s Wrench
—
50 Million Years Trip
Green Machine