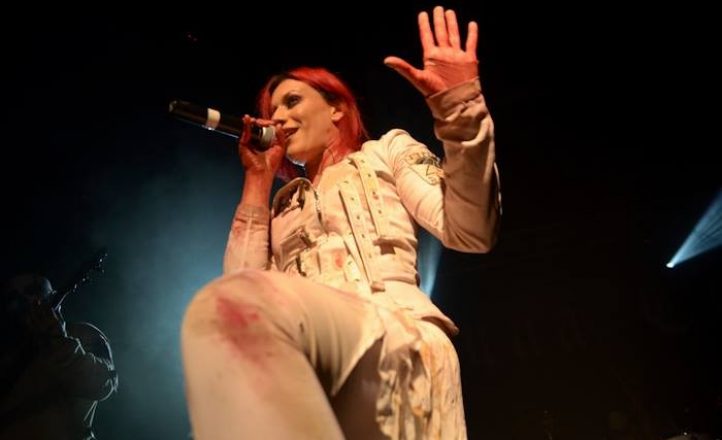 The bar at the Metro was setting a nice Gothic atmosphere for Lacuna Coil’s return to Sydney by pumping out Goblin’s ‘Suspiria’ as I entered and avoided the snaking line for merch to grab a good vantage spot inside.

Sydney five piece Gods of Eden hit the stage first, all eight-string guitar wielding and flashy drumming melodic tech metal. Working through an initially very muddy mix, this is a band with both good technical and song writing chops but, while frontman Ian Dixon does his best, they lack some appeal as a live act as the rest of them very seriously hunch over their instruments for most of the set.

After a short turn around during which time Michael Jackson tunes entertained the crowd, causing plenty of self-conscious boogieing to break out throughout the venue, Orpheus Omega stepped up. In their matching para-military style garb, the Melbournians ripped into the crowd with a set of speedy melodic death metal. In direct contrast to the rather staid openers, Orpheus Omega pulled off a manic performance with duelling guitars, keytar wielding, PA climbing and unbridled enthusiasm for their Gothenburg-inspired musical style. An engaging and energetic band, the quintet more than paved the way for the long-awaited return of Lacuna Coil to Sydney.

Despite following this band since the days of their first EP, this was about to be my first live Lacuna Coil experience. Bedecked all in blood-splattered white straitjackets on an unadorned stage, the Italians launched their set with one of their least typical songs, ‘Ultima Ratio’ from current album Delirium which provided no less than seven of the tracks they were to perform tonight. Fan favourite ‘Heaven’s a Lie’ made a surprisingly early appearance, followed by a couple of gems from the newie, ‘Blood, Tears, Dust’ – one of their heaviest songs – and ‘Ghost in the Mist’. The focus for the crowd is most obviously the vocal team of Cristina Scabbia and Andrea Ferro, their voices weaving together over the power-chord heavy chug these days provided by only a single guitarist, newcomer Diego Cavalotti, and bassist Marco Coti Zetali, looking like a lobotomy victim as he loomed stage right.

Ferro, once an average vocalist at best, is now as much a powerhouse as his female companion, their voices resonating off each other as they share and split lyrics. Many bands have featured this kind of combination but Lacuna Coil do it better than anyone and do so while keeping the crowd enraptured – even drummer Ryan Folden refuses to be left out as he puts on a Tommy Lee-inspired show behind the kit. More recent tracks make up the bulk of the set, but into the second half they pull out a triumvirate of classics that cause re-energised roars from the crowd – ‘Our Truth’, ‘Swamped’ and their version of ‘Enjoy the Silence’ that is near enough to definitive; here in the live arena they completely own it. ‘You Love Me ‘Cause I Hate You’ is just as cheesy as the album version but somehow more enjoyable and ‘Nothing Stands in Our Way’ closes the main set ahead of the audience chant that brings the band back to the stage for a monstrous encore headed by the towering ‘Delirium’ with Scabbia, naturally, totally on-point for the stratospheric high notes.

In the end, it’s hugely welcome return to these shores for Lacuna Coil, a commanding performance from a band in full flight. Let’s hope it doesn’t take them seven years to return once more.

Ultima Ratio
Spellbound
Die & Rise
Heaven’s a Lie
Blood, Tears, Dust
Ghost in the Mist
Victims
Trip the Darkness
Downfall
Kill the Light
Our Truth
Swamped
Enjoy the Silence
You Love Me ‘Cause I Hate You
Upsidedown
Nothing Stands in Our Way
—
Delirium
Zombies
House of Shame