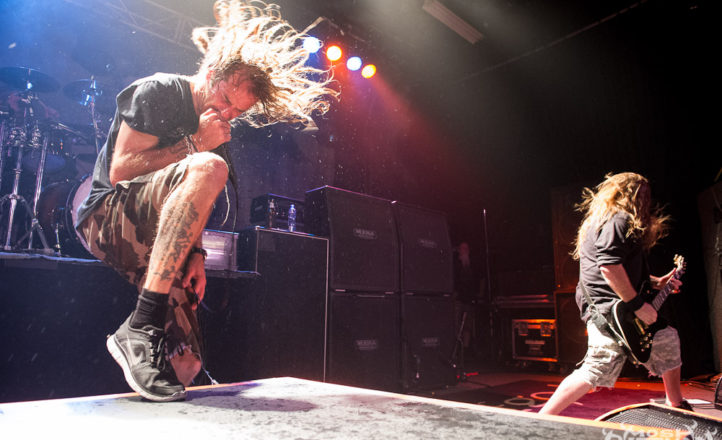 With all the sideshows happening this week, it becomes a job in itself just to decide which ones to go to. But in the case of Killer Be Killed and Lamb Of God it was a no brainer: this was not to be missed.

The early opening and set times were great for those travelling to the show, and as it was close to sold out, it was easy to assume a
few had the same thoughts. The room filled swiftly, merch was being sold double quick and the excitement levels were huge.

In only their fourth outing, all of which have been in Australia, the supergroup that is Killer Be Killed took the stage and destroyed it, ripping into ‘Fire to Your Flag’. Greg Puciato attacked the crowd like a banshee on speed, spitting lyrics and screams. Axe man Max Cavalera was in his element, inciting circle pits and facing off against Troy Sanders on bass. ‘Face Down’ saw Puciato leap into the crowd, climb amp stacks and incite the crowd double. The between track banter was kept to a minimum. These guys were here to play, and like a shotgun blast to the face they fired off a salvo of neck snapping tracks – ‘Save the Robots’, ‘Melting of My Marrow’ and the explosive ‘IED’. The set was brought to a close with an immense circle pit during ‘Wings of Feather and Wax’, with Max stopping Greg’s vocals as the entire crowd took over, closing out with ‘Snakes Of Jehovah’ and Greg surfing the crowd once again.

The Metro was packed, a tight squeeze to get around but the air was electric. Lamb of God took the stage to the screams of a sold out Metro, firing straight into ‘Desolation’. By the second song, ‘Ghost Walking’, enraged front man Randy Blythe had poured enough bottles of water over himself to feed a family of four. This made for any headbanging to be a torrential downpour for the front three rows.

‘Walk With Me in Hell’ and ‘Set to Fail’ snapped necks with a blast of fury, never letting up, with ‘Hourglass’ pummelling harder. Chris Adler didn’t so much beat the drums as he pummelled the shit out of them, laying down the explosive groove with Willie Adler and Mark Morton’s breakneck groove guitars. ‘Laid to Rest’ and ‘Omertà’ continued with surging circle pits and raised fists, closing the set with a double whammy of ‘Redneck” and the straight to your face ‘Black Label’. If you only caught one sidewave this year, this was the one to be at.

Lamb of God:
Desolation
Ghost Walking
Ruin
Walk With Me in Hell
Set to Fail
Hourglass
In Your Words
Now You’ve Got Something to Die For
Laid to Rest
Omertà
Contractor
Vigil
Redneck
Black Label

Killer be Killed:
Fire to Your Flag
Curb Crusher
Face Down
Twelve Labors
Dust Into Darkness
Save the Robots
IED
Melting of My Marrow
Wings of Feather and Wax
Snakes of Jehovah