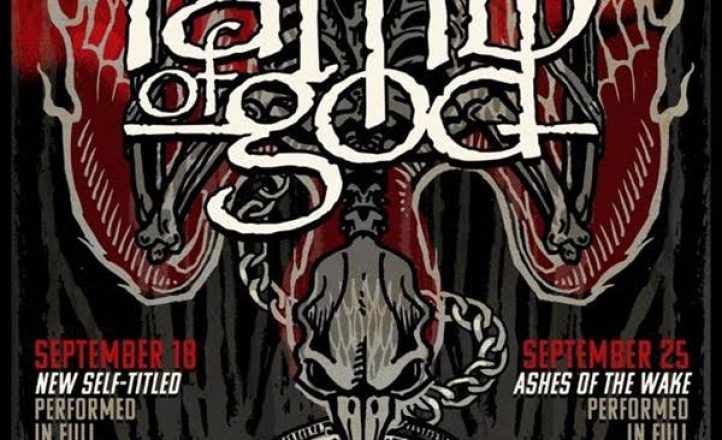 Streamed live sets are becoming the go-to for many bands as restrictions on shows remain in place around the world. When it’s by one of the best metal bands of the last twenty years doing one of their best albums, it’s one to get excited about.

After burning through their latest album the previous week, Lamb of God hit the stage in front of the cameras to perform Ashes of the Wake in full, something that may have never come to pass if not for the current situation. An added bonus came in the form of a barnstorming set from Whitechapel, filmed in front of a hometown crowd last year. With the Knoxville audience feeding off the energy of the band, swirling and roaring as Whitechapel put on a blast furnace performance for their loyal local fans, it sets up a stark contrast with the main event.

Considering how long ago this album came out, how rarely Lamb of God have aired some of these tracks live, and the fact they would be basically playing to an empty room as if it was full, the band were truly challenging themselves here. In almost no time at all, they proved to be more than up to that challenge.

Lamb of God hit the stage hot, and stayed that way as they tore through each track with a precision that was almost clinical. The set is faultless, as if they had been playing these songs every night for months. The multi-camera angles showed off the true complexity of their riffing, Mark Morton and Willie Adler’s crossfire guitar parts meshing seamlessly. Randy Blythe’s vocals came effortlessly, even if he seemed a little restrained without a seething mass of sweating bodies to channel his energy through; John Campbell locked into the groove, swaying, focusing on his instrument. It was a setting that allowed their fans to see the Lamb of God machine working together in a way they would not perhaps normally get to experience, as well as hearing some parts of the catalogue never before aired on a stage.

As brilliant as the performance was, however, what was missing was the real atmosphere of a live show – that feedback loop between band and audience, the bottom end thumping into the chest, the top end shredding the eardrums, that pure adrenaline rush of a thousand or more people pumping the air, slamming into each other, dodging bodies and shouting the songs back at the band. Impossible to fault as a live band as they might be, watching Lamb of God from the other side of the world at stupid o’clock in the morning felt more like a concert video than an actual concert. It was a storming show though, much better than nothing, but only made the cravings for full live metal shows worse.