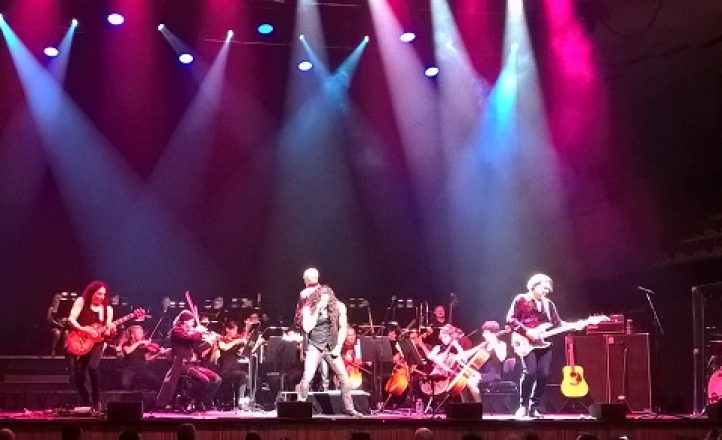 Led Zeppelin Masters is a live collaboration between long established Adelaide based Zeppelin tribute band The Zep Boys and Sydney Lyric Orchestra who have again rechristened themselves as The Black Dog Orchestra for the occasion. Now in their fourth year running annual shows at iconic venues including the Sydney Opera House, the show has also gained an international reputation which will soon see that branching out into European dates fairly soon.

Tonight’s performance was the second night of a two show run at the marvellous Opera House and provided around two hours of music written by the legendary British blues rock and now arranged with backing by a thirty piece orchestra. The Zep Boys were fronting the well-rehearsed show with the powerful orchestra conducted by the scholarly and musically experienced Dr. Dominic G. Harvey, dressed in black leather pants and motorcycle boots.

The show got underway at the scheduled time with a quick orchestra tune up as the enthused audience took to their plush, comfortable concert hall seats. Under subtle red lighting, the orchestra began the show with an orchestral overture called ‘Zepature’ which provided a brief medley of orchestral arrangements of Led Zeppelin classics including ‘Stairway to Heaven’ and ‘Kashmir’ with the former being reprised before the band walked onto the stage to take up their positions in front of the orchestra.

The show opened properly with the very first track on Led Zeppelin’s self-titled debut , ‘Good Times Bad Times’. Guitarist Tzan Niko started that Jimmy Page riff on his sunburst Les Paul guitar as Contarino quickly replicated the powerful singing of Robert Plant. Similarly, the drumming of Bradley Polain had the John Bonham groove down pat for the very start with bassist Warwick Cheatle locked in with the drumming.

‘Nobody’s Fault But Mine’ quickly followed and was the only song from Presence performed this evening but Niko again had Page’s guitar sound spot on with additional harmonica work from Contarino adding to the bluesy vibe of the song. Contarino immediately developed audience rapport with his amiable band member introductions and personable approach, at ease with an epic backing orchestra.

The first of several Houses of the Holy tracks followed with the brilliantly brooding ‘Over The Hills And Far Away’ played under green stage lighting and a backdrop of starlight effects. As the cascading strummed riff, vocals and subtle bass intensified, a full orchestra sound made for a more powerful chorus with the orchestra providing a nice crescendo to the climbing, climactic aspects within the song. The venue’s acoustics enhanced the outro of the song whereby that classic Page and Plant synchronised vibe kicked in before the introductory guitar riff was reprised.

Contarino grabbed an acoustic guitar to quickly start off ‘Ramble On’ from Led Zeppelin II and soon replicated the Tolkien-esque lyrics perfectly as the band and orchestra added sonic dynamics. Niko has Page’s guitar nuances ingrained into his playing and the next track ‘All My Love’ had him using a Telecaster guitar for an authentic tone. The inclusion of Ray Cassar’s excellent piccolo trumpet solo added to the musical appreciation atmosphere as did Polain’s drum groove that was a signature aspect of John Bonham’s drumming. Add to that principal violinist Adrian Keating’s masterful abilities and it was a set highlight for Led Zep purists.

Another two tracks from Houses of the Holy were next. ‘The Song Remains the Same’ had Niko on a red twin neck SG model guitar, invoking that signature Jimmy Page look. As the song changed into the louder, orchestral backed sections, some of that improvisational feel that Zeppelin had mastered so well in their heyday was evident. The gentle rolling ballad of ‘The Rain Song’ offered up resonant notes to ring throughout the venue. The orchestra added sonic swells and bolstered the song with melodies weaving in and out beneath the main melody line as guitar embellishments and shimmering cymbals added to the mysticism of the song.

Using cello and viola, the string section’s instrumentation was impressive, showing some clearly intricate pre-preparation. Given the song’s different tunings, Niko used the six string neck of the twin guitar for this song and added those recognisable embellishments to the guitar rhythms whilst Cheatle mainly covered the rhythm guitar parts on an acoustic guitar.

A wonderful version of ‘Dazed And Confused’ from Led Zeppelin saw Niko back on a Les Paul, coaxing those great bursts of Page’s psychedelic blues from his guitar as Contarino screamed his lungs out. The hypnotic descending riff had so much more impact with the orchestra adding an eerie feel to the song. Wandering to a nearby riser, Niko proceeded to destroy a violin bow once the solo guitar part kicked in alongside reverb drenched wails from Contarino.

‘Rock’n’Roll’ allowed further guitar solo improvisational explorations as the loose structure of the song gave the band their own stamp on the well-known tune. The audience loved it and it was good to see Robert Woolf on keyboards adding some bounce to the song whilst Niko walked over to the other side of the stage to hammer out the classic riff alongside an orchestra cellist. After that first hour had worked so well, it was time for the interval as punters could check out the amazing views of the Harbour Bridge and surrounds that the back of the venue provides.

To start the second set, athletic violinist and superb chamber musician, Véronique Serret played some impressive solo violin with drone like qualities and flurries of Eastern tinged, tension building notes under a spot light. Serret’s introduction was naturally for the epic classic Physical Graffiti track ‘Kashmir’, a song that lends itself to orchestral enhancement and here, it was perfectly done. The song soon commenced with full as the rolling, descending orchestral parts pulled against the ascending guitar riff beautifully.

‘No Quarter’ was next with Woolf’s keyboard playing utilising that well known underwater sound nicely to replicate the original recording. After some tasteful almost solo keyboard playing, Niko’s soloing included apt volume swells which then led to some improvisation with grooving drum fills for what became the extended jam part of the evening. Similarly, the Bonham classic ‘Moby Dick’ from Led Zeppelin II continued in that direction as the classic instrumental with the drummer as focus morphed a boogie shuffle into an entertaining eight minute drum solo. Polain’s tribute to the late, great Bonham was a set highlight complete with time changes, fills, snare drills, floor and tom rolls before returning to the song.

Changing pace again, two more classic tracks from IV were played. Niko, Contarino and Cheatle sat upon stools playing acoustic guitars for ‘Going to California’ with Niko using a capo to get at the song’s high notes, authentic to Page’s instrumentation. Strong vocals and the additional of flute set the tone which worked well as an introduction to the obligatory and welcome performance of ‘Stairway to Heaven’ with Niko changing to a red double-neck SG guitar. The song sounded epic with additional strings arrangements and as it built momentum, the vocal delivery alongside orchestral swells added depth. Once into the heavier section of the song, the drum groove pushes the guitar solo nicely. Led Zeppelin Masters did the song justice.

Getting the audience on their feet, ‘Heartbreaker’ received a rousing response as Niko’s rendition of Page’s unleashed solo done intricately enough to even include some of the classic song take’s mistakes in the lead guitar runs. To end the main set, ‘Black Dog’ worked a treat as Contarino traded sections with the band as the rhythm figure progressed and the vocals led the audience along to the song’s climactic adventure. The octave harmony section fed well into the outro solo with Niko letting rip on his Les Paul guitar as the orchestra played the backing rhythm. The audience, all on their feet, reacted with plentiful applause and were entertained by Harvey’s jumping off his conductor’s riser to coax the crowd.

To end the night, a two song encore of ‘Immigrant Song’ and ‘Whole Lotta Love’ was played with bombastic energy. The vocal driven and almost staccato groove feel of the octave riff of ‘Immigrant Song’ gave that much more swagger of the final song with audience transfixed as the psychedelic aspects of the song took hold. Drum timing changes, pick up selector rhythms, guitar pick slides and moaning vocal effects. Contarino and Niko humourously traded the chorus of Donna Summer’s ‘I Feel Love’ before the song returned to the chorus before an extended closing of the epic song. Clearly having fun, Niko took off around the back of the orchestra to appear next to the rhythm section as Contarino sang with amazing projection.

Show completed, more applause continued with the orchestra, band, soloists and conductor bowed to the appreciative, well packed Opera House Concert Hall. Led Zeppelin Masters deserves their success having yet again delivered an expansive and genuine tribute to one of the most influential rock bands that has ever existed. Do not miss this show next year if you’re a Led Zeppelin aficionado. Highly recommended and an accessible coverage of Led Zeppelin’s wide and varied discography.

Set One:
Zepature
Good Times Bad Times
Nobody’s Fault But Mine
Over The Hills And Far Away
Ramble On
All My Love
The Song Remains The Same
The Rain Song
Dazed And Confused
Rock And Roll