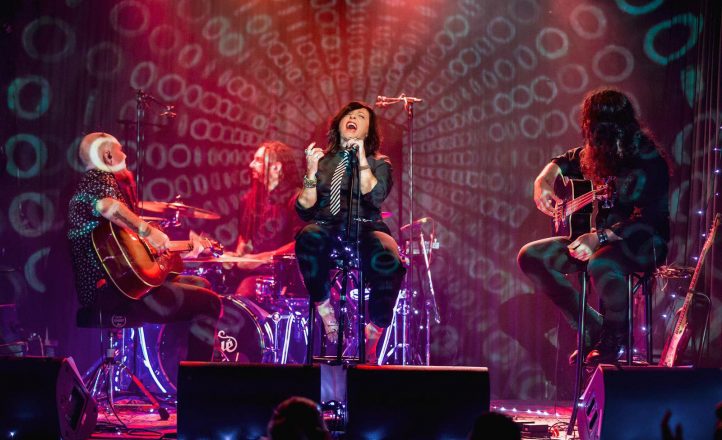 Even during the heyday of pub rock in Australia, Tuesdays were the least preferred gig night option, but when there’s been almost no live shows for two thirds of a year, any night is better than none at all. Newtown’s glorious old Vanguard Theatre was the setting for Lillyé’s first show since March and their first acoustic showcase performances, and a pretty good crowd was in attendance, all seated and sensibly socially distanced.

Sydney singer songwriter Jess Finlayson was operating alone tonight in her current guise as Raising Ravens, armed only with her voice and an electric guitar. Not one known as a shrinking violet, there was plenty of confidence and swagger in her performance despite being on stage totally alone. A couple of her songs had a self-conscious quality that made them feel a little incomplete but she rounded out her set with a trio of great rockers.

Barefoot and perched on a high stool mid-stage, Virginia Lillye then led her band through their set, her voice apparently undiminished even after another full show only two hours prior. Indeed, while admitting it was tough pulling two gigs in the same night, it didn’t appear to hamper them at all as they rolled through selections from both their releases.

With their heavy and heavily-layered live sound stripped back to acoustic instruments, Lillyé was a very different beast at the Vanguard this evening. No less enchanting, the acoustic setting allows their arrangements to come alive and breathe in an entirely different way, adding a level of warmth and light to their often deceptively dark material. A pretty spectacular light show adding a further dimension, even in acoustic mode Lillyé display plenty of power, Virginia’s voice filling the room like a force of nature.

Ending with an extended jam that allowed new drummer Stef Billimoria to show off his dexterity, the four piece rocked a great set as they promised more new material in 2021 and pulled off the transition to acoustic mode without a hitch. Look out for them when they return to full power in the future.