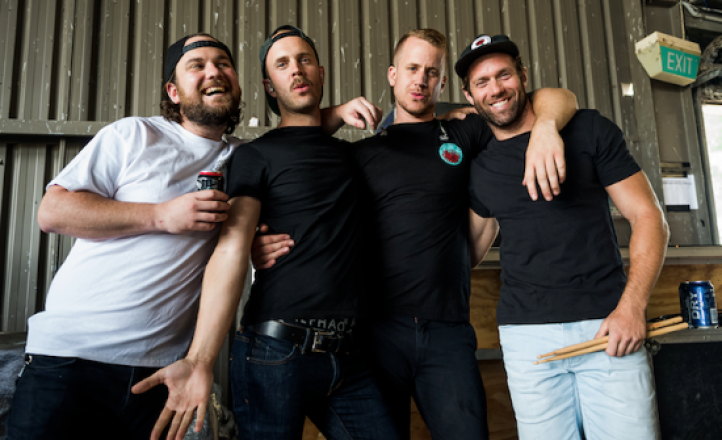 A hefty line of punters shivered outside Manning Bar at 8pm, keen to defrost and jump around. Gold Coast’s Eliza and the Delusionals definitely warmed us up with their colourful indie rock; front woman Eliza Klatt looking the superstar part with her fairy floss locks and glitter Doc Martens.

Next up was Tiny Moving Parts, a self-proclaimed ‘family band’ all the way from Minnesota, here on their first tour of Oz. I hadn’t done my research on these guys prior to the gig, and am happy to report they blew me away. It quickly became evident why so many people were here early, with most of the mosh singing every single word of the three piece’s set, and providing rapturous applause after every track. On and off stage was high energy, high happiness, and high gratitude. These guys did not stop moving the whole time; I got tired just watching them. So much fun! Made a mental note to purchase their entire back catalogue post-show.

There was a big shift in the pit after TMP. I wondered how many people were there just for the US support band. The welcoming roar certainly sounded like everyone was there for Tassie heros Luca Brasi when they hit the stage though.

Launching into ‘Stay’ and ‘Let it Slip’ off their new LP, the whole of Manning Bar sang in unison, much to the delight of the band. They were stoked we knew all the words as their fourth album, also called Stay, has only been out for a matter of weeks. Crowd surfing began, glasses were emptied, and ‘shoey’ chants were ignored.

Frontman and shaka throwing king Tyler Richardson has a new power and confidence about him on stage, but is still humble as ever. After asking who had seen them before, Richardson explained that just three years ago LB played in Sydney to 20 people, and thanked the crowd multiple times throughout the set. He and his three bandmates seemed genuinely grateful to be up on that stage doing their thing.

A set highlight was when fellow Tasmanian, songstress Maddy Jane, joined the four piece on stage to share vocal duties on ‘Count Me Out’. The whole crowd singing during this track was magical. Props to whoever was in charge of lights too, really boosting the atmosphere and a massive step up from previous times I’ve seen Brasi.

Encore closer ‘Anything Near Conviction’ was the most powerful jam of the night, perhaps because we knew it was all over after that one. Smiling and sweaty, we poured out of Sydney Uni back into the cold, hearts full and muscles aching after a wonderful, emotional, punk-rock performance. Luca Brasi are here to stay.