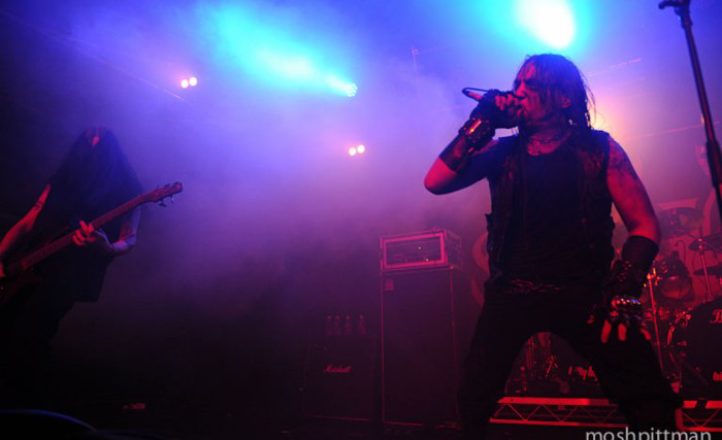 First time I heard Marduk was back in high school. I scribbled their logo on my pencil case thinking it was the most evil metal band I could think of next to Dark Funeral. Over a decade later and my opinion still hasn’t changed. As such I was keen to see them and get the year started in the heaviest way imaginable.

Melbourne’s Denouncement Pyre were on first out on a stage giving the smoke machine an early workout and unleashing an absolutely relentless and punishing set of black metal. This was amazingly the first time I had seen them in the ten or so years of their existence so I had no idea about any of the songs, or their titles for that matter, but they were extremely impressive and a very worthy support act.

The much hyped two-piece Inquisition were on next to an almost full venue, immediately taking total control of the room with a face melting set of vicious black metal alternating between blast beat dominated insanity to down tempo, pummelling riffage. The towering frontman Dagon would stride from one microphone to the other at each side of the stage while Incubus held it down with brute force only pausing at times to hold his sticks skyward in the sign of the inverted cross just in case any were left wondering about their ideology.

From what I could recognise, much of their blistering set was taken from 2013’s astounding Obscure Verses for the Multiverse record with almost no break in between songs for applause or banter. It was a fine tuned, flawless performance from a band at the top of their game. I hope to see them back in the country again soon, hopefully with a new album in tow.

The headliners emerged after a short break to the sound of warplanes and machine gun fire to set the mood and wasted no time in raising the bar even higher in terms of sheer intensity and relentless musical ferocity. They have obviously been around and touring for a LONG time so it just seemed to them like they were going through the motions while we all stood jaws agape, not quite believing what we were seeing. Unfortunately, a shitty mix and swampy sound would soon rear its ugly head, full of heavily triggered double kick drum, bass and not much else, rendering much of performance a bit of a write off especially when vocalist Mortuus would speak between songs and nobody could hear him over an abrasively loud backing track.

They have released a plethora of quality albums over the years so their set list contained many varied tracks from their extensive back catalogue, even reaching as far back as 92’s Dark Endless. ‘Wartheland’ from this years Frontschwein record was played to a feverish and sweaty crowd  but ‘Souls for Belial’ got probably the craziest response of the night, in terms of the mosh, which brings me to another point. The security on the night while obviously briefed beforehand, seemed like they had never covered a metal show before, and so the term ‘heavy-handed’ could be used to describe how they responded to a moshpit which was mild at best and to some punters who didn’t even last a song before being kicked out for showing too much enthusiasm or accidentally falling into someone at the side of the pit. Poor form Hi-Fi.

What followed was even more bizarre. After a typically brutal set from the black metal veterans, they returned for an encore but then left after asking if the crowd wanted a final song. I can’t really speculate on what was behind it but if I had to hazard a guess it was possibly the lack of crowd response to the call out for the last song which no one in the crowd could understand. This led to a Spinal Tap-like turn of events as the entire band left the stage in a huff except for the bassist who was still tuning up. When he realised he was the last on stage, he too hurriedly quit the stage with the curtain closing soon after, sending beer cups flying at the stage and a chorus of boos from confused and agitated fans.

Overall it was a night of three world class black metal performances which was ultimately let down by an extremely muddy mix for the main band, overzealous security (to put it lightly) and the diva-ish and unprofessional behaviour of the headliners walking off a song early without any explanation.