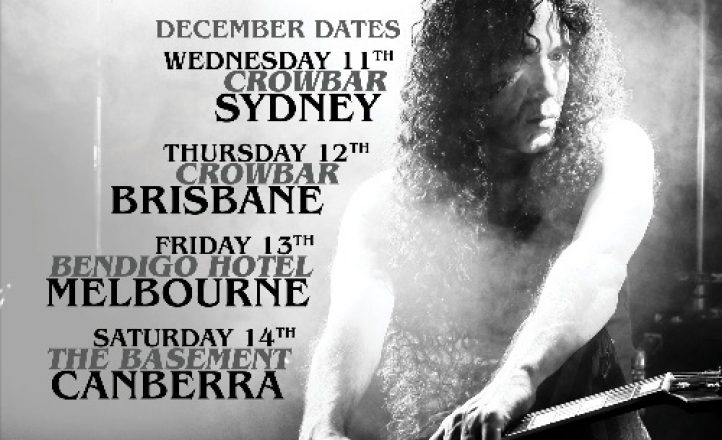 Marty Friedman has toured Australia before as a member of Megadeth during the landmark Rust in Peace tour cycle in 1991, and as a guitar clinician almost a decade ago. Since then, his discography has continued to expand musical horizons so to finally see him in Australia on his first official tour with his band was a long awaited treat. The crowd in attendance on a Wednesday night club show was of a substantial size so his drawing power is still very much intact.

Kicking off the first show of the tour, South Coast-based five piece metal band Temtris warmed up the early birds. Genevieve Rodda’s vocal strength is reliable as ever as is the twin guitar attack from Anthony Hoffman and Anthony Roberts who trade solos with ease whilst the rhythm section keep things running. It has been a busy year for Temtris who have snared a variety of international support slots and on every occasion have performed consistently.

Musically, their range traverses melodic, vocal driven power metal styled tunes to groove-based metal and hammering thrash. Throughout, the vocals project well even when the band is smashing out heavier material and sometimes at a double time pace. Aside from Rodda’s clear vocal power in tracks such as Breathe, Run and Wings of Death, her crowd interaction skills have developed well. Similarly, the guitar technique variations and use of different textures keeps things interesting. Temtris naturally finished up their set with a suitably bombastic end.

Next on was Wollongong four piece Carbon Black who used some atmospherics to set the mood. Opening with the title track from the End of This album, a heavier, slower feel soon built pace with guitarist Damon Bishop unleashing some squealing yet fast leads with a wah pedal wash. Next track Ignorance saw frontman Jon Hurley adding some death metal growls to the punk, thrash metal vibe enhanced by impressive drumming. A couple more tracks saw the rhythm section hammering their way through some heavy, musical barrages that still maintained a groove feel.

Cowards showed the band’s increasing use of dynamics with a heavy gallop feeding into a half time section accompanied by more guitar soloing chock full of trills and wah pedal bursts. Carbon Black completed their set with a swift rendition of Deny, another varied track that also gained pace before delving into slower interludes allowing Hurley to demonstrate his vocal range. Their sound might be a tad brittle sonically with that Dimebag-styled high gain but the groove and pace is certainly there and the band has improved.

The third support act for this evening was Melbourne’s Trigger, who as a five piece manage to traverse a variety of styles ranging from melodic and progressive metal to full bore thrash metal, bordering on death metal at times, given the blast beats delivery on occasion. Now sporting a hint of make-up, guitarist Luke Ashley leads the riff for more commercial sounding opening track Demon Eyes as co-guitarist Sean Solley contributed with different parts, making the twin guitar aspect work well whilst vocalist Nathan Peachey contended with some feedback concerns.

Tethered to the Tide was a heavier outing as bassist Matt Ambrose and drummer Darcy Mulcahy locked into the rhythm parts. The song has some Maiden aspects given the harmonised guitars and overall delivery but it was Veins of Ambrosia that was the most impressive track this evening. Ambitious indeed in the progressive almost mythological approach but with well executed time changes, interesting traded guitar solos and a heavy rhythmic outro, it paid off. The next two tracks, Slaughterhouse and Operation: Self-Destruct were suitably aggressive, with double time thrash, gallops, falsetto vocals and half time breakdowns. They ended their set with further blasting material which switched to a melodic chorus. Some sound issues detracted slightly from the performance but Trigger certainly has some decent songs.

The audience now well and truly warmed up and solidly mingling to the front, it was time for Marty Friedman and band to kick our collective backsides and they most certainly did. As the lights dimmed on the Friedman logo backdrop, Japanese five string bassist Kiyoshia and drummer Johan Nunez (Firewind, Kamelot) opened the set with a bass and drums track. Sporting a red dress and knee high boots, Kiyoshi demonstrated both style and command of her instrument with ease.

Friedman’s playing is a unique masterclass of technique and taste; bending into notes, adding musical tension whilst the bass and guitar parts harmonised lines. His descending lead runs and fast repeated patterns demonstrated his athleticism and mastery of everything from sweeps, alternate picking to sustaining notes, ending on a high vibrato, searing note and feedback howl.

The punk rock vibe of Street Demon provided heavier rhythms and for old school fans, the inclusion of Marty’s signature flamenco styled, Spanish guitar run from Holy Wars…The Punishment Due was a nice touch. Devil Take Tomorrow provided a distinct change of pace with clean guitar parts but was not jarring in delivery. The slow, brooding piece was beautifully executed with hints of neoclassical and blues amongst the virtuoso playing. Whether guitar lines slid effortlessly into notes against shimmering cymbals or when emotive guitar parts were played, the band stayed in time, the tone remained excellent and the sense of the melody line was always present despite the spatial variations within tracks like For a Friend.

A bit of Cacophony mayhem in The Ninja delivered climbing harmonised guitars to usher in the sweep picking masterpiece as Nunez’ drumming followed the intense guitar parts. Some bass soloing prowess from Kiyoshi allowed the band to relax. She has ample skills with the slapping bass style and a quick cover of Stevie Wonder’s Higher Ground with drum and guitar backing allowed her to sing a bit with notable vocal strength before returning to the bass theme and sustained chords.

The highlight for many was the medley part of the show where Ashes to Ashes, Forbidden City, Tornado of Souls and Skin O’ My Teeth were woven together to cover some fan favourites.

Two tracks from Wall of Sound upped the heaviness stakes. Whiteworm started with a clean, looped start led by Friedman as the band launched into it. Scraping chords, fluid intervals and heavy blast beats morphed into a quiet interlude. Secondly, Self Pollution contained more ferociously heavy drumming and was atonal in parts. It was the heaviest track tonight and guitar wise, covered the lot including chromatics, exotic scales and vibrato variations and a heavy, speedy conclusion.

To close the main set, a segment of Thunder March provided a dramatic theme that soon saw Morioka repeating a sweeping pattern as his band mates made him drink a shoey. Returning to the music and following a brief drum solo, Ballad of the Barbie Bandits concluded the main set.

To conclude the encore, a cover of Kaeritakunattayo by J-Pop band Ikimono Gakari was presented by Friedman and band. It was a melodic yet metal version which bounced along, ending the show with a happy vibe.

Following Friedman’s decade long service to Vic Rattlehead, his solo career has grown in all sorts of ways as evidenced tonight by a variety of music played plus different arrangements of better known classic cuts. His superb band didn’t hold back in delivering an exhilarating and energetic performance either. This was a great show that was both entertaining and interesting with incredible musicianship. Let’s hope Friedman and company return again to our shores again soon.
LA High Ball
Hyper Doom
Amagigoe
Street Demon
Stigmata Addiction (Intro)
Elixir
Devil Take Tomorrow
For a Friend
The Ninja
Angel
Kiyoshi Bass Solo
Medley: Ashes to Ashes / Forbidden City / Tornado of Souls / Skin O’ My Teeth
Whiteworm
Self Pollution
Thunder March / Ballad of the Barbie Bandits
—
Dragon Mistress
Kaeritakunattayo.