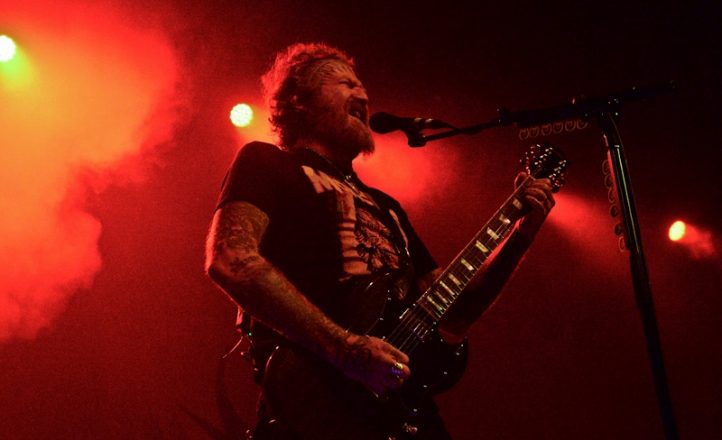 Prog metal titans Mastodon returned to Sydney for an explosive Download sideshow where they blew the roof off of the Big Top in Sydney’s famed Luna Park, delivering their famous blend of sludge metal, stoner rock and prog to Australian crowds once again, bringing with them French progressive death metallers Gojira. The two of them going on Australian tours together almost seems like a tradition of sorts at this point, being the third time they’ve come out together on the same bill.

First, the venue itself is great. I haven’t been to the Big Top before but it’s a big, nice open space with both a huge floor and seating area. The capacity I believe is about 5000, and from the looks of things, it was a full house. However, the price of beverages and concessions at the venue was a major concern, even for a live venue in Sydney, one of the most expensive cities to live in Australia. After Gojira’s set, myself and a few other concert goers walked around the venue together for roughly 15 minutes attempting to find the free  water dispenser – a legal requirement for all licensed venues – only to find that there WASN’T any, and we had to wait in the ludicrously long line at the bar to pay a ridiculous $5 for a bottle of water.

I easily spent $20 at the gig purely on a few bottles of water and a $5 sausage roll. I don’t care about the sausage roll, I expect venues to overcharge for that shit, but what I also expect is them to give out free water at licensed venues. At The Dillinger Escape Plan’s final show in Sydney last year, the bouncers were literally handing out bottles of water to people in the crowd. Here, there were taking them off people at the door. After taking one look at their drinks menu and seeing that a cider cost $11.50 I thought if I wanted to be robbed, I’d probably have a better time walking aimlessly around Mt Druitt holding a fifty dollar note in my hand. It’s a sad tale when buying half a litre from the 7/11 around the corner from the gig costs less than it did for 300ml inside the venue.

Anyway, nobody is reading this to hear me whine about concession prices and a venue’s lack of following state licensing laws, they’re reading this to see what I thought of Mastodon and Gojira, two of the most prolific and groundbreaking metal bands of modern times.  I have a feeling that a majority of the crowd was actually there to see Gojira, and after talking to some of the crowd, I can’t help but think my feeling was validated. Not surprisingly, the French metal greats have yet to come out here on their own headlining tour, or even supporting anybody else but Mastodon. It was my first time seeing Gojira, as for some reason it took me a while to get into them. A mistake I won’t be making again anytime soon.

Gojira sound nothing short of amazing life, with an uncanny ability to recreate every highly technical sound heard on their studio albums live. They have an energetic stage presence and their jumping and kicking around doesn’t take anything away from their musical ability, and probably instead helps to solidify it.

They performed a crowd pleasing set, made up mostly of songs from Magma, but made sure to play fan favourites ‘The Heaviest Matter of The Universe’ and ‘Flying Whales’ which definitely went down well with that audience. Frontman Joe Duplantier knows how to get a crowd moving and did a very good job interacting with the audience. They could have played a few more songs, seeing that there was no other support act, but you can’t have everything. You’d be hard pressed to find a better lineup than the two of them.

Mastodon did not waste any time taking the stage, starting their set probably only about 20 minutes after Gojira had finished. And boy, what a set. As soon as the lights went down, a guy behind me lit up a joint, and others followed; the venue quickly filled with the aroma of marijuana. I would expect nothing less from fans of Mastodon.

It was my first time seeing Mastodon properly, as whenever I saw them at Soundwave I kind of moved between them and other bands, and never got to catch them on previous headline tours. Because of this, I wasn’t sure of what songs that have or haven’t played in a long time, but doing my research for this review I quickly found that they played quite a few they haven’t ever played before and some they haven’t played for quite some time.

Sydney’s show saw the live debut of ‘Toe to Toe’ from the band’s most recent EP, Cold Dark Place. ‘Trilobite’ off debut Remission got played for the first time in 10 years and ‘Ghost of Karelia’ also aired for the first time since 2012. This would have been pleasing to fans of the bands older, more sludge influenced material. Overall, while the band’s setlist did seem to have an understandable focus on their most recent album, Emperor of Sand, they made sure to play a variety of songs from various points in their career.

Mastodon proved to be masters of their craft, effortlessly playing an almost two-hour long set without ever looking like they needed to take so much as a breather. The most impressive member to me is drummer Brann Dailor who has inhuman stamina and lung capacity. Not only can this guy punch out some of the most technical drum beats in metal, but he can do it all while singing, and without sacrificing either his vocals or his drumming. I found them to be unexpectedly talkative, as both Troy Sanders and Dailor made sure to talk to the audience and introduce some of the more lesser played or newer songs on their set. One of the stand-out moments was prior to ‘Ancient Kingdom’ when Sanders pointed to a man in the front row, “This next song is dedicated to this fucker right here, who just flipped onto his head” At the end of their set, Dailor came up from behind his kit to talk to the audience, warning us to “Watch ourselves walking home through clown town [Luna Park] because those clowns will slit your throats!” As a fellow sufferer of coulrophobia, I completely understand where he is coming from.

The four magical Georgian mountain men gave a fantastic show, filled with a focused, synchronized intensity not many bands can match, apart from maybe their own support act, and then disappeared into the night, presumably to celebrate Bill Kelliher’s birthday with more beer, weed and heavy metal before having to ship off to play in Brisbane. If I wasn’t really a fan of Mastodon before, I definitely am now.