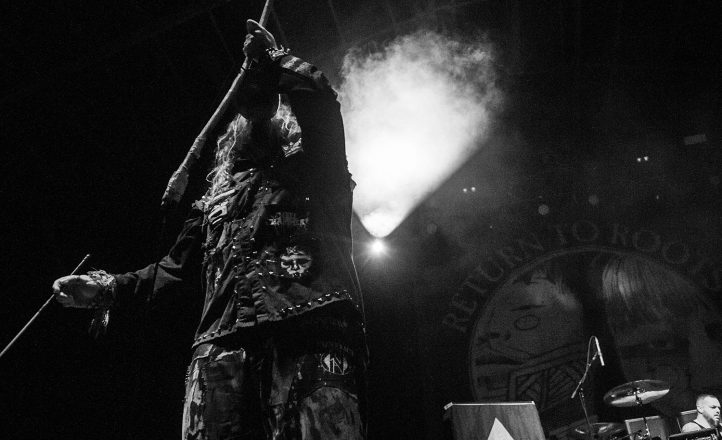 As a Friday night prospect of cathartic Brazilian groove and fiery Welsh ‘Ragga-Metal’ beckoned the city’s headbangers and punks to Luna Park’s Big Top, Sepultura’s Cavalera brothers prepared to revive a 21-year old landmark album in a foreign city last visited at The Metro in 2012. Hordes of the tattooed and black-clad milling past fairground novelty mirrors, cotton candy and clowns was a sight to see.

Skindred’s Benji Webbe and cohorts took the stadium stage at 8:15 for a typically energetic and boisterous set of bouncing steel grooves, twisted dancehall lyrics and gang vocals; a booming and funky compliment to the jungle grooves of the headliners. Included in over an hour was recent material from 2015’s Volume LP plus 2002’s post-Dub War-debut Babylon.

This familiar blend was authentically delivered by the brothers with the use of additional floor toms, Indigenous samples and berimbau (a Brazilian single-string percussive bow, used in the martial art of capoeira), for sections of “Born Stubborn”, “Dusted”, “Rattamahatta” and the intro of “Attitude” respectively. Eagerly entering into a frantic pit, the feverish energy in the air was palpable, though the gig wasn’t even that deafening! After performing Roots in its entirety, (closing with a rampant version of the brilliant “Dictatorshit”), Max’s cry of “you scream more and we’ll play more” segued into showing the band’s stylistic roots of thrash and proto-death metal with a brutal “Beneath the Remains” medley of “Desperate Cry”, “Orgasmatron”, and “Polícia”, followed by other covers and closed out with a thrash version of “Roots Bloody Roots”.

Many schooners, circle pits and walls of death later, Return To Roots officially drew to a close as tired punters staggered through the exits to a humid city night. As a tour-bus conversation with Max & Igor revealed in April, expect the rest of the year to be a busy one for the Cavaleras, with Iggor’s involvement in Soulwax and Max’s roles in supergroup Killer Be Killed, Cavalera Conspiracy, and Soulfly bringing forth new music soon. Until then, OPEN UP YOUR MIND AND GO YOUR OWN WAY.