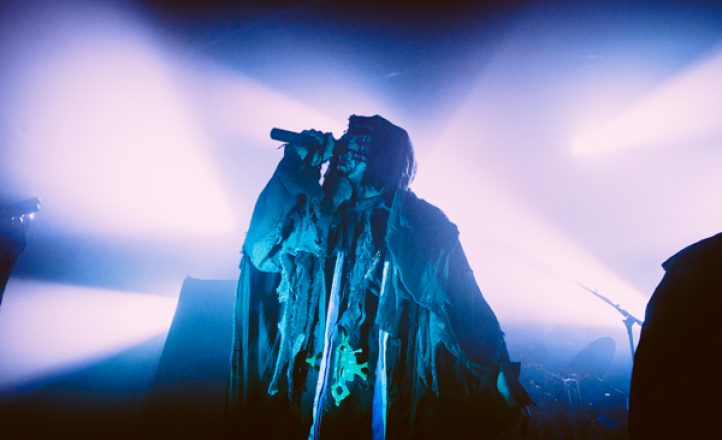 Mayhem needs no introduction, nor does their seminal album De Mysteriis Dom Sathanas. The band has been around the world playing this most classic of black metal albums in its entirety and tonight is Brisbane’s opportunity to taste the darkness.

Opening band Departe was up against it from the get go as they had no drummer and no stage room. They played as well as can be expected under the circumstances and never missed a beat playing to pre-recorded drum tracks, but it did seem to sap the onstage energy as the band had to focus so hard on getting it right.

Quickly and ably following up is Ruins who bring an attitude and crowd interaction that was missing from the openers. Vocalist Alex Pope commands your attention with his chant of ‘Oi Oi Oi’ in between some of the band’s Entombed-style breakdowns, and conducting the band around him during their more chaotic moments.

Two piece black/death band Bolzer take their time setting up and checking levels, before taking their leave for an atmospheric entrance that takes far too long to get going. When it does, they just hammer away, boring your intrepid reviewer as the music just never felt to go anywhere for the duration. Without any hint of musical dynamic, it bleeds into static noise.

As the fog begins to roll in closing the confines of the venue a pre-recorded message comes over the PA asking the audience to kindly keep our mobile phones in our pockets so as not to ruin the atmosphere that is being created for the show. The band make their way onto the darkened stage one by one as the intro to ‘Funeral Fog’ rolls in, stopped only when shamanic vocalist Attilla slinks onto the stage and the theatrics begin. Mayhem blasts through the album set barely slowing down, until the centre pieces of ‘Pagan Fears’ and ‘Life Eternal’ when a pulpit is brought onto the stage and candles lit. Attilla demands attention like a deranged minister preaching to his ghouls.  As the band leave the stage one by one, leaving only the vocalist at the pulpit, he blows out the candles, disappears back into the fog and the night’s entertainment is finished as quickly as it began.