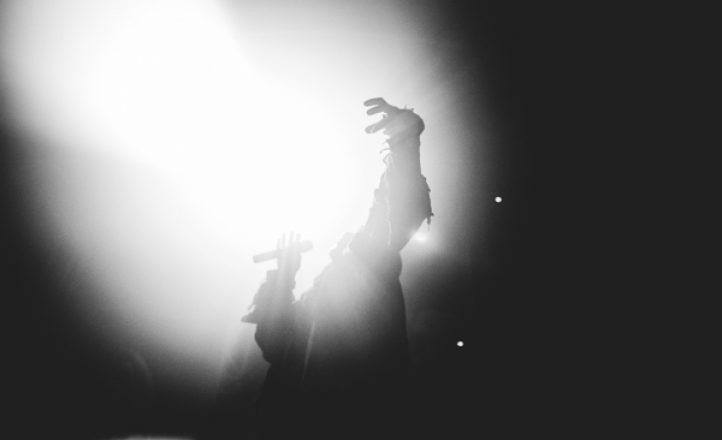 Waiting in line for Mayhem brought a palpable sense of elation, if not electricity, to the air. The notion that they would bring to life one of the seminal cornerstones of black metal, De Mysteriis Dom Sathanas in full already felt like we would be witnessing something greater than a simple concert. This buzzing atmosphere extended to the waiting throng as we all piled in to watch Tasmania’s Départe kick off proceedings.

Départe were much the same as they were during the preceding time I saw them. Bringing a measured, consistent pace to their set, their immense sound was at first offset by some mixing problems that gradually got sorted out. That meant that their vocals and lead guitar were at first buried; engulfing some of their subterranean heaviness in a thick fog. As soon as that was resolved, the band resumed firing on all cylinders. Playing a good chunk of material from 2016’s Failure, Subside, they ably set the mood for the performances that were to follow.

Fellow Tasmanians Ruins were up next. Every time I’ve seen them, they’ve been the mark of consistency. Having since bolstered their sound with a second guitarist, since the last time I’d seen them, they’ve refined that consistency further still. Their set list drew from their vast discography, including favourites from 2008’s Cauldron up until 2016’s Undercurrent. Sonically, they delivered their music as it was on their studio albums, if not heavier (due to the addition of Luke Ray on guitars). One minor quibble was their stage presence. The majority of the band got on with their performance, focusing on nailing it. Which was fine but it didn’t allow them much free movement. Frontman Alex Pope brought an energy that made up for it. Which added to their, dare I say, ‘fun’ spirited take on black metal. I don’t know how many times I’ve seen Ruins (it’s been a lot over the years), but this particular performance made me look forward to the next one.

Next up, Switzerland’s Bölzer. Now, let’s get the obvious out of the way. Bölzer are a two piece. But let’s get one thing straight. Similar to Inquisition, Bölzer betray your perhaps preconceived notions that a two piece is going to have a thin, reedy sound. Bölzer somehow engage a myriad of dissonant sounds, along with epic sounding riffs and mythical soundscapes. Bölzer manages to unite all that under the anchorage of drummer HzR and guitarist/frontman KzR. Playing a decent cross section of material from their EPs and 2016’s full length Hero, their setlist blended it together effortlessly. Bölzer is a band that can’t simply be ‘seen’ live. They need to be witnessed and experienced, as the disparate sounds swirl around the concertgoers and the room, to create something unique and mesmerising.

Taking the headline spot and culminating the evening’s festivities were Mayhem. A spearhead of the second wave of black metal, who need no introduction. As mentioned at the beginning of this review, they were to bring life to 1994’s absolute classic De Mysteriis Dom Sathanas. They’ve been performing it on tour on and off since 2015, so this reviewer went in thinking that they’d have honed to a fine point, forged like sharpened steel. Would they be able to deliver on such a lofty goal?

Shadowed alternatively by complete darkness and pale blue light, amid a backdrop of some of the artwork from the seminal album, Mayhem emerged onstage. The instrumentalists cloaked in monk’s robes and corpse paint, with similar vestments for Attila. Combine this with the affecting lightshow, and the candles set on stage, Mayhem had already found a good way to infuse the unsettling atmosphere of the original album into a 2018 live performance, and they had yet begun to perform.

‘Funeral Fog’ soon kicked in and any problems that the mixing may have had earlier on in the evening were well and truly behind us. The mix was spot on, allowing the band to ably recreate the atmosphere and sound of the album. Which can’t have been an easy task. Yet band stalwarts Necrobutcher and Hellhammer, along with newer recruits Teloch and Ghul were ably adept at recreating that desolate canvas to which Attila Csihar invoked his own darkness. Every move he made on stage, every pained howl, Attila commanded the audience. I really have to commend Mayhem for breathing both new life, and the original stench of dead air into classics like ‘Freezing Moon’, ‘Pagan Fears’ and ‘Buried by Time and Dust’.

The whole album was performed with the captivating authenticity that it needed, that deserved. Mayhem performed nothing other than De Mysteriis Dom Sathanas but when they clearly expended such energy and effort into their performance, it was all this reviewer needed to be satisfied.

Black metal is at once draining, and intense with the effects aimed at taking hold of both musician and audience. To come with everything is to expend everything into the performance. The complete performance of De Mysteriis Dom Sathanas saw this in action, what was observed was an enthralling performance which would have been detracted from had Mayhem added to the setlist. As it was, it was the perfect ending to a night spent witnessing metal history.