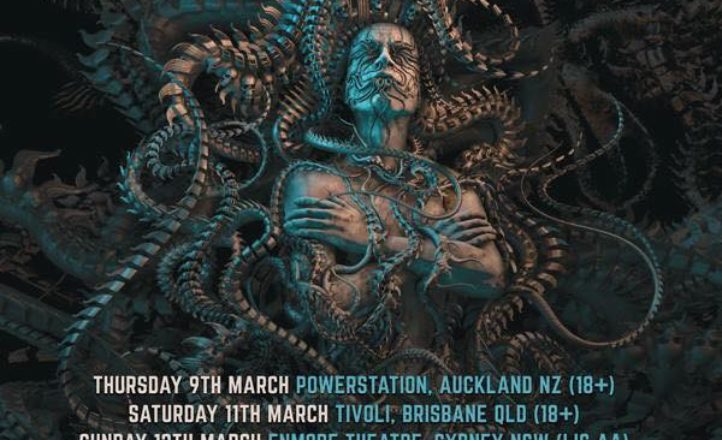 Enmore Theatre, Enmore NSWMarch 12, 2017
Experimental metal titans Meshuggah tore up the Enmore on Sunday night along with support of Aussie deathcore legends Thy Art Is Murder. Meshuggah are the progenitors and godfathers of the controversial breed of progressive metal known as djent that has taken the scene by storm. Most have a love or hate relationship towards djent, but like it or not, Meshuggah certainly deserve respect for their ground breaking and influential sound.

It’s been a while since I’ve had the pleasure of seeing a gig at this great venue, and I was completely unprepared for the monster that is Meshuggah. But first there Thy Art Is Murder, though I’m sure they need no introduction. Now, I’m gonna be honest. I don’t like deathcore. It’s not my thing, and I don’t really see the appeal. But I must say Thy Art Is Murder is the exception. At first a bit confused as to why they were chosen as openers, after seeing them perform, I can totally see why Meshuggah chose them.

CJ McMahon is an incredibly charismatic front man, a great personality and extremely powerful vocals. His roars, growls, screams and squeals could be heard front and centre. With wit and humour, he knows exactly how to work a crowd and get them pumped and riled up for better or for worse. Drummer Lee Stanton has the stamina and tempo of twenty men, giving one of the most powerful drumming performances I’ve seen in a long time. The rest of the band was on point and played with a kinetic energy that is yet to be matched by other bands of their class. They have one hell of a stage presence and incite some of the most intense and brutal circle pits I’ve seen. Noses were broken, blood was drawn, and shoes were lost in a scene more a slaughterhouse than a concert. Which is exactly what their fans are looking for. I might not like what they do, but that doesn’t mean I can’t respect them for doing it well and putting on a kickass show.

By the time Meshuggah took the stage, the crowd was more than warmed up, but still completely unprepared for tidal wave of sound.

Meshuggah are so calculated their performance is like an assembly line, the band giving off an almost mechanical vibe to their performance, working in complete harmony . Every member knows exactly what to do and when to do it, and they pull it off flawlessly. The blinding and impressive light show, compliments of Meshuggah’s long-time light tech Edvard Hansson and shrouding the band in dark silhouettes, only added to their own inhuman energy and stage presence. Jens Kidman is a talented frontman who has a strange ability to get a crowd to do what he wants without uttering a word to them. Meshuggah performed like a well-oiled machine, the sheer power of the show something like being hit over the head with a hydraulic lift while mid orgasm.

The pit was utterly chaotic. I was constantly doding fists and hair flailing like whips, but sometimes I wasn’t quite quick enough. This was one of the greatest live shows I’ve ever had the pleasure to experience. On their next trip down under, do yourself a favour and buy a ticket.

“I’m probably not the wild, young, rebellious type that I used to be”

Gig-Hopping in the Age of COVID-19

Amyl & the Sniffers at the Factory