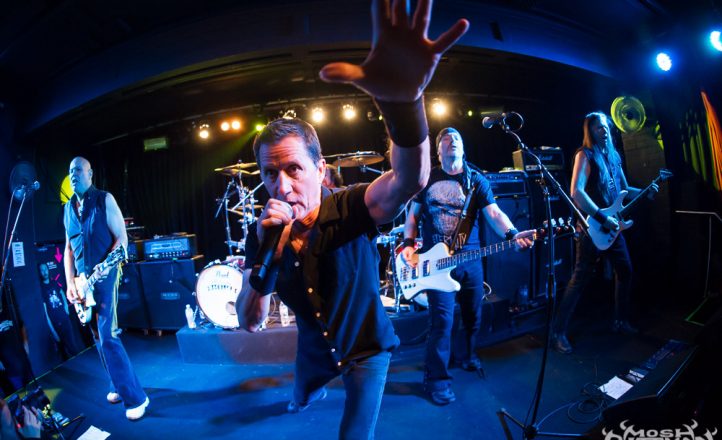 There is nothing quite like an old school heavy metal show to bring out the devoted metallers of yesteryear in sleeveless battle jackets littered with patches, eager to update their wardrobe with a new version of t-shirt for a legendary band. It also provides an opportunity for the relevant band to demonstrate the strength of their new material which has likely caught the attention of newer thrash metal and heavy metal fans alike. Metal Church were once poised as contenders for rising towards the lofty heights of success that fellow San Francisco veterans, Metallica attained. Whilst the fickle nature of the music industry almost excommunicated the band to the history books of semi-thrash metal legends, perseverance and reuniting with vocalist Mike Howe, has seen them record and tour behind a couple of fantastically well received newer albums.

Howe initially joined the band before their third album, Blessing In Disguise, replacing the sadly now late David Wayne, but throughout the career of Metal Church, primary songwriter and rhythm guitarist Kurdt Vanderhoof has driven the band’s direction and done so successfully. Their latest album, Damned If You Do, has evidently coincided with the band finally touring Australia for the first time ever since the band hinted at great things with a major label deal around thirty three years ago. Tonight’s show promised a mixture of old and new songs performed with a new found energy that would reinvigorate the audience, especially the patient die-hard fans.

South Coast based five piece Temtris have played the Crowbar venue numerous times and consistently deliver with soaring vocals, galloping rhythms and quick-fire guitar solos. Their most recent album, Rapture, has shown their song writing and arranging strengths improve so it is no surprise to see their fan base increasing, with plenty in the audience singing along. The venue was still filling as their set commenced but they have an energy from the start with the rhythm section of drummer Nicholas Bolan and bassist Nik Wilks underpinning the combined guitar rhythms and fast lead soloing parts between guitarists Anthony Fox and Anthony Hoffman.

Genevieve Rodda is both a charismatic and commanding frontwoman with a vocal strength that is clearly well rehearsed. She projects well, carries leather apparel with conviction and is now sporting a microphone adorned with metal wings to complete the metal look. Whether climbing onto the barrier to sing, raising fists or moving around the limited stage space, she stayed in tune and retained a decent vocal range.

A definite set highlight was the title track from prior album, Enter the Asylum, which saw the guitars locking into riffs as the song progressed from galloping power metal into heavier thrash based passages, again with the rhythm section keeping it all running along smoothly whilst Rodda’s vocals soared. Some of their material is ambitious with dynamics but when Temtris hit their stride, they certainly deliver and they have improved substantially on the live front.

Western Sydney four piece Hazmat are another experienced band who has supported a variety of international acts thus far. Launching into their set, Jay Callaby – who must surely be influenced by Dave Mustaine as far as vocal delivery style goes – initially had some technical issues with his guitar. Guitarist Andrew ‘Duck’ Howard’s flying V guitar sound was fortunately intact as the band persevered to the next track.

After a rocky start, problems were quickly ironed out without drawing attention to it and Callaby’s guitar rhythm sound could soon be heard bouncing around the venue walls. Fast thrash metal was the overall order of the day with some swiftly executed trade-offs and some delay on the vocals for extra oomph from backing vocals to push the choruses. New tracks such as the almost groove metal of ‘The Handover’ had more traded solos whilst ‘Silent Majority’ gathered pace into thrash metal territory and had well played time changes.

The rhythm section was tight and had plenty of additional cymbal work to spice up the solid drumming. Various band members had the odd bit of choreographed side leans to add emphasis to a song section but jumping on the spot didn’t quite take with the older crowd. Still, ‘Life’, from their self-titled album, was aired and rumbled along nicely. To close the set, the thumping track, ‘Burden of Proof’ from Atonement was well received and thus concluded the support band proceedings, demonstrating that the Australian metal scene is still alive and kicking. Hazmat delivered a well-paced set and came through well, despite a starting hiccup.

Metal Church finally graced a Sydney stage and once their set properly kicked in after some spooky sounding introduction music, it was with the energetic, swirling groove of the title track from Damned If You Do. Former W.A.S.P. drummer Stet Howland was the powerful percussive engine room from the very start and locked in well with bassist Bobby Ferkovich from Presto Ballet, filling in for Steve Unger, absent due to passport issues. At stage right, Kurdt Vanderhoof took to his white Les Paul Gibson guitar running through dual amplifier stacks with utmost precision. Hirsute Rick Van Zandt unleashed polished and tasteful sounding solo parts when not bolstering the powering rhythm guitar of Vanderhoof. Howe soon won over the crowd with his vocal prowess during the bouncing galloping metal of ‘Needle and Suture’ from XI and moved with lithe movements not often seen in heavy metal whilst delivering emphatic and punchy vocals. The dynamics of ‘Badlands’ from the great Blessing in Disguise album demonstrated the variety of Vanderhoof’s excellent guitar sounds, the dexterity of Van Zandt’s solo ability, not to mention the tightness of the band.

Drumming technique also shone with Ferkovich’s basslines clear in the mix, even more so as the rhythm section effectively introduced ‘Gods of Second Chance’ from the aptly titled Hanging in the Balance album. The heavy, bouncing rock of ‘Date with Poverty’ saw one of Van Zandt’s more expressive and creative guitar soloing abilities being more prevalent. The haunting ‘Watch the Children Pray’ next. As the song built pace, the audience sang along to the sustained chorus melody. Aside from great rhythm parts, on occasion, Vanderhoof would contribute to solo duties or harmonise guitar lines with Van Zandt. The debut album finally got a look in with ‘Beyond the Black’ done flawlessly, the apocalyptic track of the 80’s entertained and excited the crowd. The cutting track, ‘By the Numbers’ followed and as far as new material is concerned, was a certain show highlight. The powering, galloping riff in unison with the on-point rhythm section and multi-octave raising vocals made for a cracking main set closer.

Announcing the encore with amusing banter, Howe dispensed with the machinations to simply continue and maintained energy levels of the show. Final track for the night was the masterful ‘Fake Healer’ from Blessing in Disguise with the great riff skills of Vanderhoof on show, driving the song which was also embellished with some excellent guitar harmonies and of course, more enthused crowd sing-alongs.

Metal Church put on a sensational, no-nonsense show tonight and there are very few bands at their level who would be able to follow such a set. For those of us who have literally waited decades to hear their music played live, we were happily rewarded with a tasty eighty minute set. The sound production was excellent, band interplay was great and the pace of the show impeccably constructed. Metal Church are not trading on past glories, they are back and the metal world should hopefully take notice.
Damned If You Do
Needle and Suture
Badlands
Gods of Second Chance
Start the Fire
Date with Poverty
Watch the Children Pray
No Friend of Mine
The Black Things
Beyond the Black
By the Numbers
—
In Mourning
Fake Healer