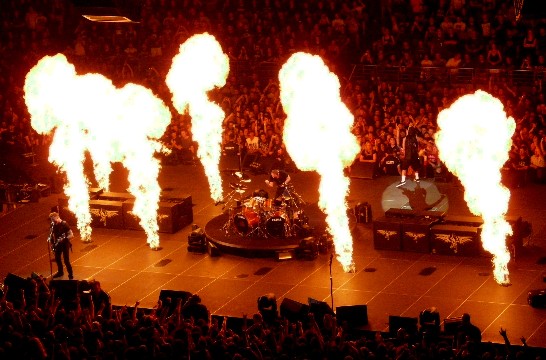 Sometimes when you sit back and think, it’s pretty amazing how far Metallica has come. From their humble beginnings, to becoming one of the world’s biggest bands that sells out arenas night after night.

Due to travelling up and a very early starting time, I missed the majority of Baroness but from what I saw in their closer “A Horse Called Golgotha”, they were pretty enjoyable, played quite solidly and did their level best to get the crowd going but they seemed to look a little bit lost up on the huge “in the round” stage. They would be more suited for a club-sized venue rather than a gargantuan arena.

Following an insanely quick changeover, Lamb Of God hit the gargantuan stage and utilized every square inch by delivering their brand of southern flavoured metal to quite a positive response from the masses filing in to Acer Arena. If you have seen Lamb Of God before, the set was really nothing new but with tracks like “11th Hour”, “Now You’ve Got Something to Die For” the attendees in an aural assault, it didn’t matter as there were healthy moshpits going and quite a few of the punters singing along and banging their heads. Basically, they got the crowd ready and fired up for Metallica while possibly gaining some fans of their own.

The changeover before Metallica was like the calm before the storm. It truly amazed in how fast and professional that Metallica’s crew were in getting everything ready. Throughout the 45 minute changeover, there was excitement and tension (culminating with many voicing their opinion and of course the arena crowd staple – the Mexican wave), but most of all there was anticipation coming from many inside ranging from first timers all the way to people who have seen them 100+ times. Then before you knew it, the lights dimmed and  “The Esctacy of Gold” filled the air and every person in the arena was ready for what was to come.

Throughout the two hour timeframe, Metallica delivered a performance with a level of intensity, passion and professionalism that many of today’s bands could only dream of achieving and proved once again why they are the benchmark for heavy metal. The setlist took plenty of twists and turns – one minute there were tracks from Death Magnetic such as the opening laser show that is “That Was Just Your Life” and “Cyanide” (which really came alive in the live setting) that segued into a blistering double shot of “Creeping Death” and “Harvester Of Sorrow” – which did bring out the fanboy when there was James Hetfield singing it and crunching that uber-riff out right in front of you.

The setlist staples were there – “Sad But True”, “Enter Sandman”, “Master of Puppets”, “Nothing Else Matters” and the flame-filled “One” which sounded as great as they would have back in the day, but the Sydney crowd were treated a rarity or two such as the seldom played “No Leaf Clover”, a sing-along inducing version of “The Memory Remains” and pure jaw-dropping renditions of “Orion” and “Battery”, during Robert Trujillo charged through the bass parts on a road case right in front of where I was standing – I am still in awe that happened!

From a performance perspective, the band were firing on every cylinder and looked like they were truly enjoying themselves up there. Hetfield has never sounded this good, Lars Ulrich nailed his parts and in between songs got up to get the crowd going, Kirk Hammett soloed away while keeping up with Hetfield riff for riff and Trujillo kept the low end down, paying respect to his predecessors while creating a legacy of his own.

Sometimes an encore can be clichéd and cheesy, but Metallica take it to another level by turning the houselights on during the final song, “Seek and Destroy”, and creating a big party atmosphere that could have been powered by the adrenaline-filled crowd. Death Magnetic beach balls that dropped from the ceiling and handfuls of guitar picks caused fights among those wanting a souvenir. Metallica owned Sydney once again and gave the crowd plenty of memories that will stick in their heads for years to come –  or at least until their next visit.