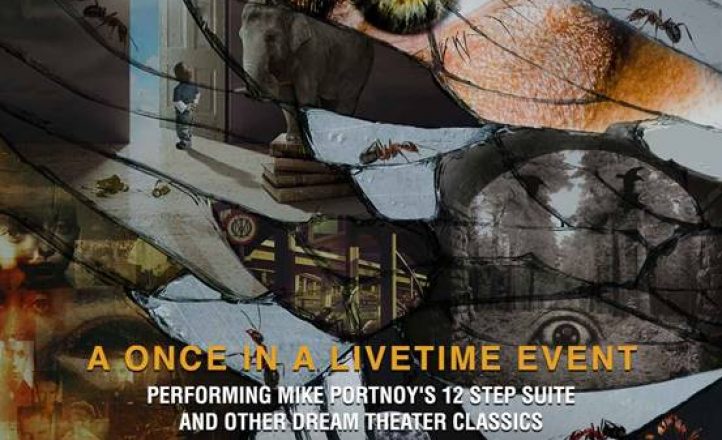 Many years ago, world renowned drummer Mike Portnoy elected to document his conquering of alcoholism whilst still with his band Dream Theater. Doing so with a suite of songs that reflected his journey soon became an overwhelming but intense collection of five songs, divvied into twelve parts that represented the stages of the rehabilitation process. The ‘Twelve-step Suite’ as it became known spanned across five albums starting with Six Degrees of Inner Turbulence in 2002 to his last album with the band, Black Clouds & Silver Linings in 2009.

Dream Theater and Portnoy having long since parted company, it was time for Mike to ensure a world tour of a live performance of the epic ‘Twelve-step Suite’ transpired. Joining forces with the majority of London based progressive metal band Haken and Texan guitarist Eric Gillette from The Neal Morse Band (of which Portnoy is also a member), he put together his Shattered Fortress tour, named after the suite’s final song.

As the spoken word of Dream Theater’s ‘Regression’ played, on came the band to take up their respective stage spots, the man of the moment, bandana and blue goatee sporting Mike Portnoy, perching atop his kit.

On cue, they burst into ‘Overture 1928’ as the drums and keys locked in, adding extra power to the triple guitar attack before the melodic guitar lines segued with vocalist Ross Jennings waltzing on stage, invoking a possibly unintentional James LaBrie vibe to proceedings in both appearance and voice. Given the audience were clearly of the Dream Theater fan base, that was welcomed, which became increasingly more evident when they were singing along with the next song, ‘Strange Déjà Vu’.

One of the heavier riffs of the night cranked up the pace next as ‘The Mirror’ from Awake was aired, marking Portnoy’s first song openly describing his battle with alcoholism. An overhanging microphone allowed him to sing whilst playing, swinging sticks and even standing upright smashing at cymbals yet still keeping the kicks going strong. Diego Tejeida wandered to the front of stage to unleash a keytar solo while guitar solos galore set the standard for the night with primarily Gillette and Charles Griffiths trotting out impeccably precise renditions of John Petrucci’s phenomenal fret-board work.

At the end of the song, Portnoy addressed the crowd from the front of the stage to introduce the ‘Twelve-step Suite’, explaining how deeply personal is was for him to tour these tracks as both unfinished business to play the suite live in its entirety and as a fiftieth birthday present to his fans.

By this stage, the backdrop visuals for anything from hands and lightning to spooky shadows, seagulls, forests and album artwork from a ceiling projector became more pronounced with tie-ins to the songs as  ‘The Glass Prison’ from Six Degrees of Inner Turbulence started the official proceedings of the suite. Plenty more guitar solos and smashing cymbals plus time signature changes ensued with the ‘Revelation’ movement of the song getting musically heavier and offering up faster trade-off solos between keyboards and guitars underpinned by complex parts from the rhythm section plus a slower paced outro with an eastern feel.

‘This Dying Soul’ was one of the show’s definite highlights. As the stark background contrasted between an eye and wintery visuals, the band set to work on playing an intricately complex piece that was also craftily melodic following a bass introduction from Conner Green. Effortlessly shifting gears, altering in sonic textures and with added vocal harmonies and Portnoy’s snare sound cracking through the PA while his tom fills, cymbals mutes and fast double kick drum work provided a technique lesson for progressive metal drumming.

Huge applause filled the venue at the halfway mark of the show whereby ‘The Root of All Evil’ provided the next song in the suite sequence, chock full of heavy riffs, a driving rock pace and vocals reaching a higher register before a slower, melodic soaring chorus. It is the most compact track of the suite which tonight included a perfectly played guitar solo from Gillette.

‘Repentance’ from Systematic Chaos featured Portnoy on both drums and vocals with visuals of silhouettes of white ants running around an ochre background setting the mood. It was the slower, more reflective part of suite, further embellished with the flowing, shape shifting imagery and spoken word parts by names like Steven Wilson, Steve Vai, Joe Satriani, Dave Ellefson and Mikael Åkerfeldt.

The conclusion of the ‘Twelve-step Suite’ kicked off heavily with apt looping images of a thundering elephant approaching in front of lightning. Given it was the tour moniker, ‘The Shattered Fortress’ acts as a summation of various themes from previous parts to bring it all to a musical denouement. Vocal duties were traded, some keytar was trotted and Portnoy took to his cymbals with aggression.

A progressive metal show wouldn’t be that without a huge encore. Portnoy and cohorts did not disappoint as they returned to perform a few more songs from Metropolis Pt. 2: Scenes from a Memory.

During ‘Home’ the drum accompaniment to one of the guitar solos was a solo in itself with flourishes of drum fills interspersed between Portnoy’s aptitude to cover the full range of mammoth kit including quick fire bursts of cymbal and snare hits. The crowd once again sang long to the chorus before the hypnotic riff changed to a raga feel and then saw Portnoy deliver a brief yet incredible drum solo outro. The instrumental piece ‘The Dance of Eternity’ followed, providing a variety of time signature changes plus fast keyboards and guitar parts played in unison at speed. The final song for the night was ‘Finally Free’, in case there were any audience members uninitiated to the world of progressive metal’s long show lengths. For everyone else it was climactic and started with a dramatically ominous keyboard introduction from Tejeida, the mood further set by black and white backdrop visuals. A suitably climbing guitar solo, as dictated by the song, was followed by the crowd singing along to the repeating outro chorus as images of clouds inferred the show’s end.

Tonight’s show was a real treat for Dream Theater fans who never thought they’d never see Portnoy’s astonishing ‘Twelve-step Suite’ performed live in full. To see it not long after Dream Theater had been through the country added some context to the rarity of the event. Portnoy’s methods of achieving his aim were rewarding for both himself and his loyal following plus it was done respectfully to the source material. The show lasted 110 minutes and included some highly intricate music that didn’t feel like a music clinic thanks for Portnoy’s ability to both impress and entertain.