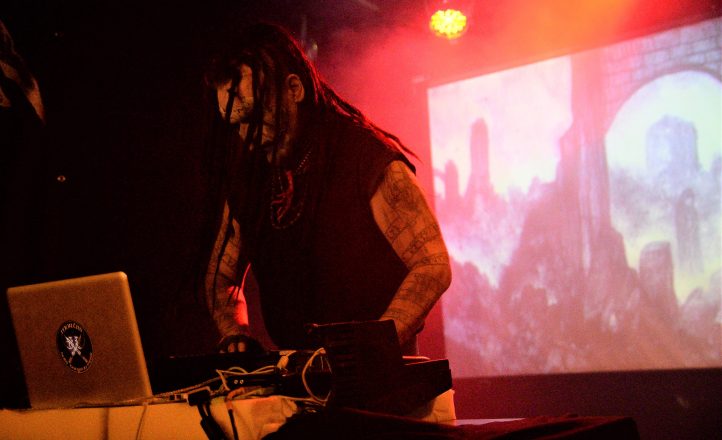 Mortiis is additionally known for being bassist/lyricist for the earliest incarnation of Emperor. While he arguably left that sound behind when upon departing to forge paths anew with his eponymous project, there is still much crossover and respect from fans of various genres of metal.

To that end, the night’s festivities began with Blue Mountains-based two-piece Host. Host create ritual ambient soundscapes; employing the use of synths and percussion to bring forth atmospheres that are both haunting, and engaging. They ply their craft in a capable manner, using propulsive synth to create a foundation on which carefully layered percussion and sparse vocals add to the tension. Host performed an enjoyable set to open the night, even if they had to contend with the chatter of the crowd.

Next was Melbourne’s Greytomb, a five-piece band who play black metal with an atmospheric bent. Performing tracks spanning their discography, the selections they chose from 2016’s A Perpetual Descent and 2017’s Monumental Microcosm blended together well. Their sound combines influences dominated by black metal, subtly underpinned by post-rock elements to deliver an aggressive, oppressive wall of sound. The instrumental members of the band carried their set with technical proficiency while frontman N. Magur contorted and twisted both his body, and whatever objects lay at his disposal (most notably the mic stand) in time with the music, creating a visual expression of the images conjured by Greytomb’s sound. At this point in the night, the floor began to fill out a little more and Greytomb concluded their set to the applause of the expansive crowd; their pummelling set proving to have been an intriguing counterpoint to the methodical, ritualistic performance offered by the preceding Host.

A quick changeover ensued, after which Mortiis promptly took the stage. Consisting of a keyboard and a laptop, Mortiis’ stage setup was understandably understated compared to the preceding acts. Yet, flanked by banners and video projections, he brought forth an imposing presence as he took to the stage. Mortiis had announced, prior to the tour, that he would not aim to recreate Ånden Som Gjorde Opprør exactly as it was recorded, but that he wanted to revisit it with the means of his current musical approach.

Mortiis gave the crowd exactly what was promised, the album performed with a matured approach which remained reverent to the original, while displaying elements of his increased ability as a composer. Of particular note was Mortiis’ ability to retain a complete connection to the piece, and to the audience, even in spite of a few people who could have proved a minor distraction.

The performance was a reminder of just how many moods and feelings Ånden Som Gjorde Opprør managed to encompass; akin to the driving pulse of early Norwegian black metal, albeit pursuing more of a dreamlike atmosphere than the nightmarish one which so many of those acts sought to conjure. Both ‘En mørk horisont’ and ‘Visjoner av en eldgammel fremtid’ represent something of a journey, one that Mortiis took in 1994, and chose to retrace in the modern era, beginning in 2017. For all the advances in musicianship, and technology available to him, Mortiis revisited his work  in a manner that, in tandem with the video projections, presented it as the grandiose conceptual piece that it was. Albeit this came with the reminder that it was one man presenting it, rather than being performed by an orchestra, which lent the renewed piece an intimate fragility, additionally, when coupled with the subtle piano and organ motifs served as a further reminder of Mortiis’ matured compositional abilities and renewed approach.

Mortiis’ performance at the Factory presented a musically varied, if ideologically intertwined bill. Host brought the night to a start with an evocative ritual, Greytomb upped the pace with their shifting, intense atmospheres. And finally, Mortiis captivated the audience, in showing us why he is the creator of dungeon synth and the purveyor of his own brand of Dark Dungeon Music, he brought a seminal album to life and imbued it with a finesse that resonates just as much in 2018, as it did at the time of its release, all those years ago.