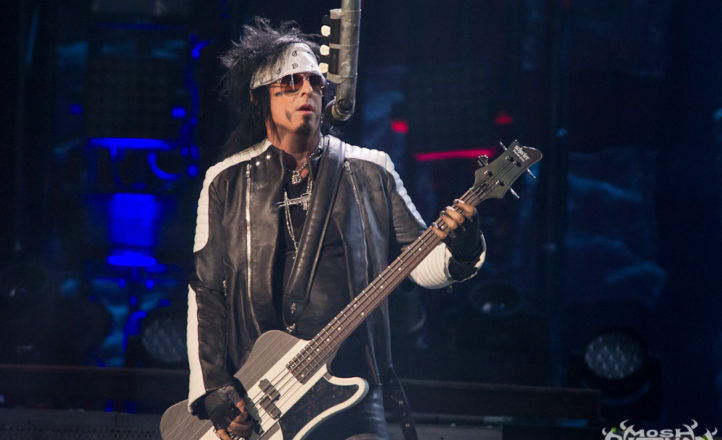 The old Olympic precinct was swarming this evening with the Swans smashing the Cats at ANZ Stadium while Mötley Crüe’s apparently final rock extravaganza filled Allphones Arena right next door. Openers Smokin’ Mirrors – now apparently known as RedHook – were missed by this correspondent as he battled the resultant crowds but reports from colleagues suggested that almost any of the other bands that entered the “competition” to open this gig would have been better.

Enormous and slow-moving queues at the bar forestalled any indulgence in alcoholic beverages before it was time for Alice Cooper to deliver his patented mix of shock n’ roll and vaudeville pageantry with his usual flair and energy. The eternal showman’s set has barely changed in at least two decades but he never disappoints thanks to his own dynamic charisma and dedication to his craft and the unstoppable talent of his side-players that now includes Nita Strauss of the Iron Maidens sharing the shredding with Ryan Roxie and Tommy Henricksen. With every song a hit, a raucous sing-along from the near-capacity house was guaranteed from the moment the band exploded into ‘Department of Youth’ and the pace was set for the rest of the unfortunately shortened performance. While the ferociously tight band traded off solos and chops, Alice Cooper showered the crowd with paper money shaken from a rapier (‘Billion Dollar Babies’) and fake pearls (‘Dirty Diamonds’) before he transformed into Frankenstein’s monster and then ‘The Ballad of Dwight Fry’s’ tormented titular character ahead of his mock execution (‘Killer’) and top-hatted resurrection as his crew brought down the house with ‘School’s Out’ – explosions, balloons, glitter and spectacle, simply one of the greatest live shows anyone could witness, as always.

Nikki Sixx has been responsible for one of this writer’s most enjoyable gigs (Brides of Destruction, Sydney 2004) and for one of the most disappointing (Mötley Crüe, Sydney 2005) and it was now time to see which way the pendulum would swing tonight as he hit the stage with his band for what they earnestly claim will be the last ever time in this city. ‘So Long, Goodbye’ provided an opening fanfare until Mötley Crüe ripped into ‘Saints of Los Angeles’, looking surprisingly lean and mean for a bunch of over-50 year old former drug casualties. Apart from Vince Neil, that is. In contrast with the rest of the Crüe who were as tight as they’ve ever sounded – even Mick Mars looked fairly healthy – Neil was a shambles, a tattooed meatball breathlessly ambling about the stage, missing his cues and struggling to sing  barely half of most songs. It was a real shame too because while Mötley Crüe weren’t truly amazing they were actually very good, their frontman the only weak link. Tommy Lee attacked his kit with the zeal of the eternal teenager he seems to really be and say what you like about him as a musician and a human being but watching the man interact with the crowd and pounding along to a selection of his personal favourites while dangling upside down 10 metres above the audience is honestly a sight to behold. Songwise, the set was suitably studded with gems – ‘Mutherfucker of the Year’ excepted – that the crowd embraced with full voice, fortunately for the vocalist, who was able to defer to them or the pair of smokin’ backing singers whenever his own voice gave out. Drumcoaster histrionics, a fire-throwing bass, dancers, flamepots, glitter bombs, a confetti cannon – the last three dangerously simultaneous at one point – the stage show had everything, making this last Crüe hurrah a true spectacle. The clincher was the encore with the band playing ‘Home Sweet Home’ on a scissor lift in the middle of the arena while the big screen flashed images of their early days that made Vince Neil’s current appearance even more cringeworthy. Still, he at least sounded sincere on this last tune.

While arguably shown up a little by the ageless Alice Cooper, Mötley Crüe seemed like they honestly cared again this evening. If they were this committed at other periods of their career then they could well have lived up to their own hype; still, if this really is their swansong, we’ll truly miss them. Thanks for the ride.

Saints of Los Angeles
Wild Side
Primal Scream
Same Ol’ Situation (S.O.S.)
Looks That Kill
On With the Show
Too Fast for Love
Smokin’ in the Boys’ Room
Mutherfucker of the Year
Anarchy in the U.K.
Dr. Feelgood
Shout at the Devil
Don’t Go Away Mad (Just Go Away)
Drum Solo
“Guitar Solo”
Live Wire
Too Young to Fall in Love
Girls, Girls, Girls
Kickstart My Heart
—
Home Sweet Home