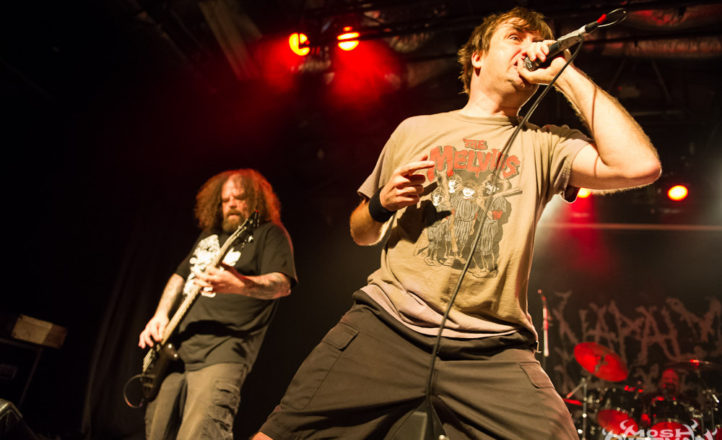 Everything was happening tonight in Sydney: the Ballet, the Rocky Horror Picture Show and Napalm Death with Carcass. It’s pretty easy to guess which one Loud was at. Opening to a half full Factory, Perth’s hardest hitting export Extortion opened proceedings and decimated with a salvo of face-fucking grindcore numbers. The uninitiated were left speechless, whilst the crustier grind folk were well aware of how one of Australia’s premier extreme bands were going to destroy the opening slot. Their first outing since 2010’s Bastardfest appearance ripped open the Sydney crowd, with a guest vocal spot from Mark “Barney” Greenway of Napalm Death to close the set.

Carcass are a band with all the impact of a nuclear weapon, abrasive, explosive and downright fucking dirty. Unfortunately the first few tracks suffered from a muddy mix, and though the sound demons sorted itself out, the band came across flatter in parts than previous outtings this reviewer has caught them. That said, “Reek Of Putrefaction”, “Unfit For Human Consumption”, “Exhume To Consume” and the explosive single from their last release “Captive Bolt Pistol” tore through the crowd, who lapped up every bit of it. The between song banter from Jeff Walker was dry, sarcastic and humorous as always. Their whole catalogue got a look in, but it was the Heartwork stuff that garnered the biggest response, with the title track exploding ear drums.

A brief reprieve then, before the destructive force that is extreme musical godfathers, Napalm Death. Kicking off with “Vision Conquest” and “I Abstain”, the bar was set at its grinding height from the get go. No sound problems here, just extremely brutal noise. A whole swag of crushing numbers from their latest offering: “Smash a Single Digit” and “Cesspits” hit the audience like a hammer to the face. The ‘Scum’ medley of “Scum”, “M.A.D” and “The Kill” was neck-snappingly brutal, while the blink-and-you’ll-miss-it “You Suffer” was aired twice, just for those who actually did miss it the first time. Having myself visited Midwest, England, I know why these guys are pissed off, and for a grind band who have existed for three decades, they are still the forefront of extreme music. Closing with the bowel-wrenching “Unchallenged Hate”, “You Suffer” and “Adversarial/Copulating Snakes”, Barney Greenway’s voice is as brutal as ever.