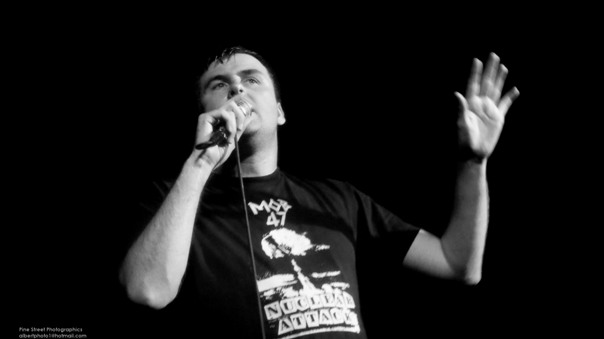 After Wollongong crew Daemon Foetal Harvest’s run-of-the-mill, sub-Cannibal Corpse death metal fare, Dying Fetus stepped up to the plate. Things have strangely come full circle for the band; having helped pioneer the breakdown-heavy, arpeggio-laced, slam riff-driven style now referred to as deathcore, years after the fact they find themselves in the fortunate position of having a whole new generation of extreme metal fans to attempt to win over. The band was tight and how crushing they were is even more impressive given that they have slimmed down to a trio. Despite  sometimes being a fraction sterile on record they were more engaging in the live arena, without being overly exuberant. Numerous fan favourites were aired (‘One Shot, One Kill’, ‘Pissing In The Mainstream’) as well as material from latest disc Descend into Depravity, before ending proceedings with a blistering rendition of ‘Kill Your Mother/Rape Your Dog’, which had the pit in a frenzy. Incredibly stupid title, fun song.

Max Cavalera recently stated that he enjoys veteran bands who become heavier and nastier as they age, rather than gradually toning down both the brutality and work ethic as the years pass. Despite each of the four members being on the wrong side of 40, Napalm Death in full flight live are still an awe-inspiring sight. Frontman Mark “Barney” Greenway has a stage presence all of his own; one minute he’s sharing his thoughts on the world’s social ills in his imitable Brummie accent and personable manner, the next he’s bludgeoning you in the face with that inhuman bellow. Last year’s Time Waits For No Slave continued a creative hot streak for a band some detractors perhaps unfairly wrote off a decade or more ago. The decision to open their hour-long set with ‘Strong-Arm’ from the aforementioned record  – not to mention the fanatical reception afforded it – indicated that both band and fans had a great deal of faith in the new material. The likes of ‘It’s A M.A.N.’S World!’ and the title track of From Enslavement To Obliteration were vicious nods to that 1988 masterpiece and ‘Suffer the Children’ and ‘Mass Appeal Madness’ other early fan favourites that the punters voiced their approval of. A much-loved staple of the band’s live show is the medley of cuts from their beloved, earth-shattering 1987 grindcore debut Scum, the quartet tearing through a handful of tracks in a matter of a few minutes, including a ten-minute, prog-metal jam version of ‘You Suffer’ (try and spot which part of that last sentence was a lie). They closed with a volley of more recent cuts and a cover of the Dead Kennedys ‘Nazi Punks Fuck Off’, a song which they’ve both made their own stylistically as well as being the ideal fit for the band’s social conscience and ethos. It was also a reminder that while they’re still enemies of the music business at large, the validity of their message is as vital as ever.