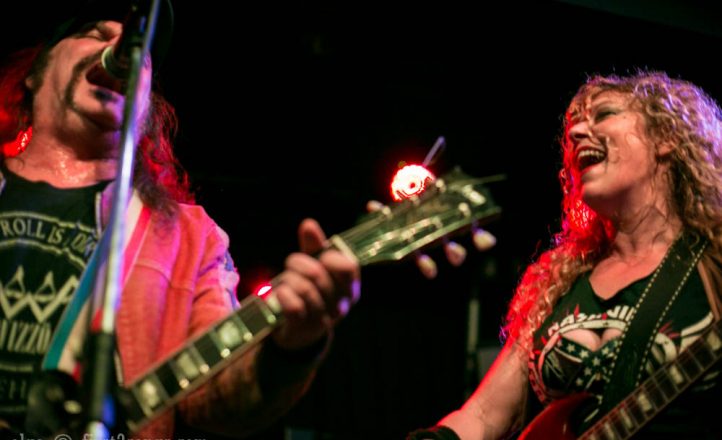 The Baldie had a spectacular line-up in place for this evening with some of our best home grown rock bands fronting up alongside one of the most kick ass acts on the planet – Nashville Pussy.

Melbourne power-trio Tequila Mockingbyrd set the room ablaze immediately. After eight months touring Europe and the UK where they have been smashing stages almost every night, they unleashed scorching rock and roll hell from the first note. Pint-sized Josie O’Toole pounds the tubs with the force of Bonham, a huge sound rolling around the room as it propels their onslaught of rock, a punkish moment here as they run through ‘Somebody Put Something in My Drink’, hard rock stompers there in ‘Good Time’ and the fist-pumping closer ‘I Smell Rock n Roll’. Tequila Mockingbyrd are quite simply a fantastic band.

The Neptune Power Federation stepped up next with a different take on tonight’s overall theme of Rocking the Fuck Out. On a stage awash with fog, Screaming Loz Sutch was a picture of fragility and menace in black wings, a huge voice in a tiny body. With Jaytanic laying down a seriously mean bass tone this evening, the NPF manifested psychedelic occult rock, TroyVod peeling off a hailstorm of leads while sharing the rock god guitar moves with Fox in a showcase of melodramatic heavy rocking.

Then it was time for some old school punk as Rust ripped it up. Veterans of the scene since seemingly forever, they fired off one high-energy no-frills track after another in an apparently endless barrage that never dropped its pace. Rust was all systems go, high-velocity rock and roll without a break. Energetic and engaging, it was nonetheless almost exhausting just watching them, a hard-edged furious assault on the senses.

Finally it was time for some Pussy – Nashville Pussy that is, and what a glorious set of hard-driving rock and roll were they about to deliver. Opening with ‘Everybody’s Fault But Mine’, it was instantly clear that this band were going to deliver as much sleaze rock and Southern-fried metal as possible. Rutyer Suys was an explosion of crazy blond curls from the first riff, an unstoppable energy ball of relentless guitar-slinging. To her right, laconic frontman Blaine Cartwright led the singalongs with a trucker cap and a voice of gravel. From flat out hard rock to countrified heavy blues and Southern-tinged boogie and back, Nashville Pussy pulled out all the stops. Cartwright may be the frontman, but his wife Suys is the band’s star, a constantly moving human whirlwind and one sensational lead guitar player – if Angus has a female counterpart, this is she. The break before the encore was really just long enough for everyone to catch their breath before Nashville Pussy came back to wrap up the night with a quickfire trio of ‘Strutting Cock’, ‘Why Why Why’ and the blazing ‘Go Motherfucker Go’. Capping off an awesome bill of pure rock, Nashville Pussy are simply one of the best live bands kicking around. Stellar. 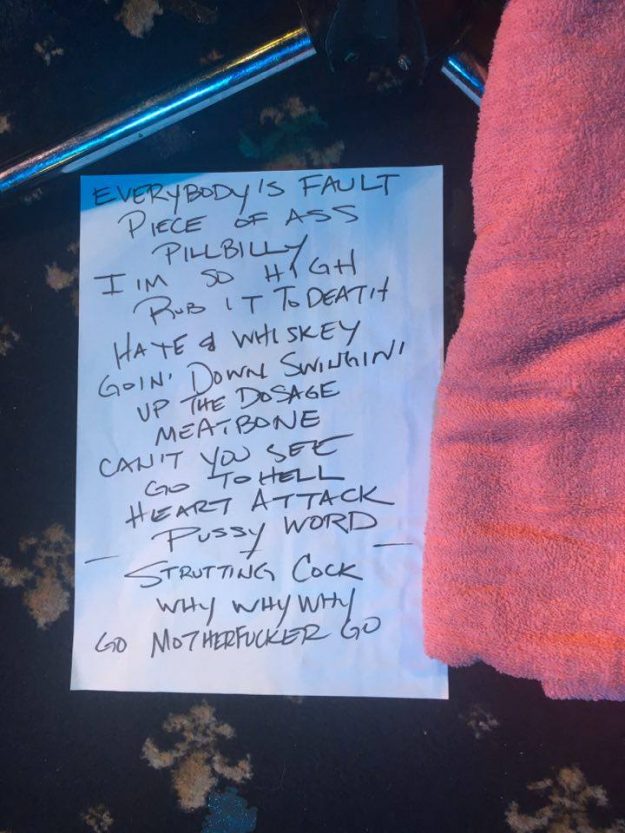