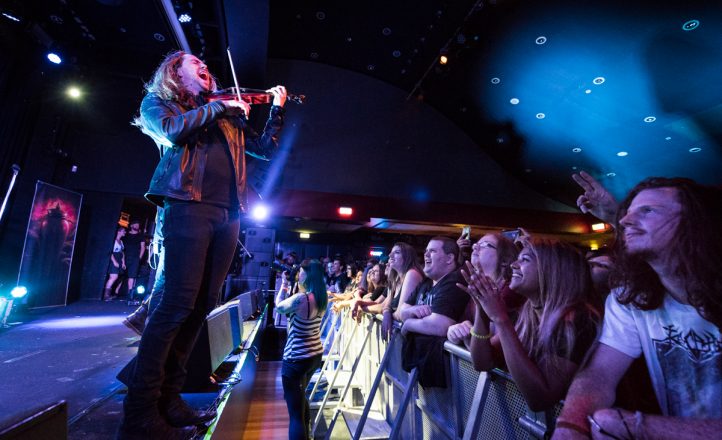 The musical appeal of Ne Obliviscaris can be attributed to their desire to unleash extreme metal with high amounts of energy as well as incorporating a healthy dose of progressive music that demonstrates their solid musicianship and songwriting prowess. Three albums deep, the Melbourne outfit are making significant waves in Australia and have toured consistently throughout Asia, Europe and North America.

The band is back on the road doing a headline tour around Australia and New Zealand to promote their 2017 album Urn and supporting them in their Sydney show at the Manning Bar was hometown buddies Circles and Sydney’s young prodigy guitarist James Norbert Ivanyi.

For the early arrivers, a chance to witness Ivanyi and his trio play was a joy. The Australian Institute of Music graduate came on and gave a jaw dropping performance,  bedazzling us all with his guitar phrases and technical virtuosity that most definitely deserved an encore. For a young musician he certainly is the apprentice of the great guitar masters and could well be on his way to joining G3 in the not too distant future.

Following Ivanyi was Circles. Hailing from Melbourne, the band smashed their set with modern and slick metal guitar tones with a punk-like attitude. Circles are a band making strident steps in the music industry with a new album expected sometime this year and a with new record deal we shall definitely be hearing more of them in the future. Their live show is also top notch and the crowd was getting right into it, making them a worthy support.

As the lights went down and the dark stage welcomed the presence of the six-piece headliners, Ne Obliviscaris filled Sydney Uni’s Gothic cathedral-like atmosphere with their menacing and sophisticated brand of melodic metal. Taking charge of their extremity was lead vocalist Xen, giving it his all in the growling department; the audience reacted with a small mosh pit and horn signs were raised up high as the band churned in riff after riff.

For those who enjoy the band’s musical dynamics, violinist and clean vocalist Tim Charles gave a momentous performance on his instrument and blended the progressive and delicate side of the band’s compositions impeccably. As a unit they transition between the harshness and beauty seamlessly and for fans who may not be familiar with their back catalogue it showcased why their sound is vitally fresh in the wide pool of Australian progressive metal bands. It’s also worth mentioning that the lights and the sound production added to the showmanship and overall quality of performance. A band’s crew and the venue are important factors of why the top metal groups in this country have the loyal support of fans.

Ne Obliviscaris’s journey is one that is unfolding. Their audience embrace their old and new repertoire and their talent as a band is combining contemporary melodic death metal alongside flamenco and jazz like guitar playing and medieval western classical music, most evident in the violin harmonies. The band’s music is a positive sign that this country is embracing a diverse palette of sound and justifies why the Australian metal scene is becoming much more varied and complex than it ever has been.