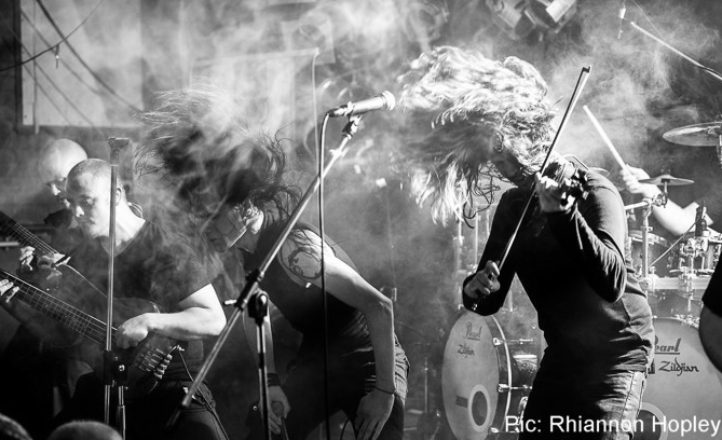 It was immediately obvious by the winding queue that reached the front door of the pub that this much anticipated gig would have been more suited to a slightly larger venue. Just hours beforehand, the sold out sign was put up; the first time that this had happened for the headliners in their own country. This was a stunning achievement in itself and a sign of their ever increasing popularity, having played the same venue in previous years to audiences continuously growing in size.

Unfortunately if you weren’t lucky enough to be anywhere near the front of the queue, there was a good chance you could forget about seeing openers The Helix Nebula, so apologies to those lads who sounded half decent but extremely muffled while we slowly shuffled our way along in the queue. Although I overheard a bit later that they had quite a ‘wall of sound’ effect going on so it slightly alleviated my disappointment in missing them.

French Canadian prog-death wizards Beyond Creation were about a song and a bit into their set by the time a majority of punters had finally made it inside, standing pretty much shoulder to shoulder in a clearly overbooked venue. Having said that, and all WHS regulations aside, it was probably the best atmosphere I had ever experienced at the Stag. To be standing with what felt like 200 or so others, simultaneously headbanging with horns raised high, absolutely in awe at the precise technicality on display was the closest most of us heathens will ever get to a religious experience.

Their set was mostly lifted from their sophomore record, this year’s grandiose Earthborn Evolution with the title track, ‘The Great Revelation’ and final song ‘Coexistence’ receiving the most attention. If there was any downside to their set it was the aforementioned ‘wall of sound’ problems again but it was to be expected with so much noodling and relentless guitar wankery going on. Beyond Creation didn’t disappoint and are headliners in their own right. Hope to see them back in the country soon.

As most of their fans know by now, Ne Obliviscaris in the live setting are the ultimate definition of tightness and precision. It is hard to imagine their album of the year contender, Citadel, being translated pitch perfectly to the stage but this was achieved pretty much flawlessly and left the entire room in amazement. Special mention to Dan Presland on the drums who is an absolute beast and never missed a single blast beat the entire night.

Being that their latest effort is essentially only three long songs, the entire album was played through from start to finish with favourites from Portal of I in between, denying the audience any time to breathe or raise their lighters for a slow, gentle ballad but most in attendance wouldn’t have it any other way.

Co-singer and violinist Tim Charles seemed genuinely stoked with the sold out crowd and at one point asked the dangerously packed room how many were attending a NeO show for the first time with a multitude of hands being raised throughout the venue. It was a great moment and signifies just how far the band has come to this point.

Fitting set closer and personal favourite ‘Devour Me, Colossus’ and encore ‘And Plague Flowers the Kaleidoscope’ capped off a truly epic night by a band seemingly at the peak of their performing abilities.

As the well-deserved success of Citadel and their recent crowdfunding world tour suggests, Ne Obliviscaris are on the brink of global metal superstardom . You’re making us so proud, lads.