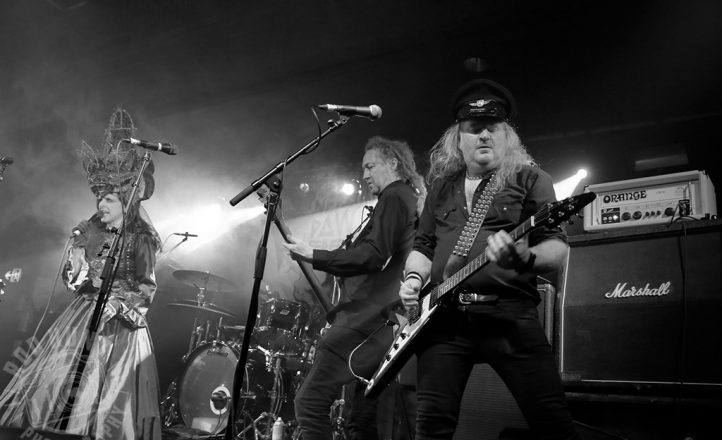 The Neptune Power Federation were supposed to be in Europe about now, but like so many things this year, those plans disappeared in a puff of mystical smoke, leaving a pile of twin 7″ vinyls behind that featured the band paying tribute to two of their biggest influences.

Not satisfied with just that, the band determined to make the best of the situation and booked themselves a special show at Sydney’s rock stronghold: the Crowbar. With capacity restrictions in place, there was an earlier show with the same bill for those who missed out on the later tickets, so both acts were well warmed up when it finally came time to hit the stage.

Before the show, it was almost business as usual at the Crowbar apart from the crowd being necessarily pretty thin, but groups were restricted in size; inside, ticket-holders were seated at tables they could only move from to go to the bar, but the sightlines are unrestricted from any vantage point.

Featuring guys from Fangz and Hell City Glamours, The Dusty Rhodes ambled on to the stage and delivered a breezy set of classic blues flavoured heavy rock. All cowboy hats and low-slung guitars, self-deprecating banter from the frontman and a good solid selection of songs, their set was shorter than advertised and ended just as the room was warming to them – as much as a seated audience can warm to a good live band, anyway.

The Neptune Power Federation’s ever-developing theatrical metal has taken them around the world, and even in front of a small crowd at a hometown show they pull all the stops. The extended intro allows the Priestess to make her way grandly through the crowd, regally ascending to the stage with her elaborate crown almost grazing the light rig, the band throwing hard-grooving riffs and huge booming drum beats at the crowd.

From that moment, the Rat Queen holds court over the Crowbar, casting spells from centre stage with a voice as huge as the room. To her right, Troy shreds at his guitar, pulling shapes as he cuts loose over Fox’s gnarly riffing. Once in a while Jay or Fox will step up to the front for a back-up, but no one dares to overshadow their singer as she conjures the magick in her towering crown, her gaze fixed on the audience as theirs is transfixed by her. Like the openers, the NPF’s set seems way too short. Captivating, catchy, tight and exceedingly well done, it is a performance that only gets more and more enthralling with each appearance of this band.  Little wonder they have grabbed the attention of Europe’s metal-crazy audience.