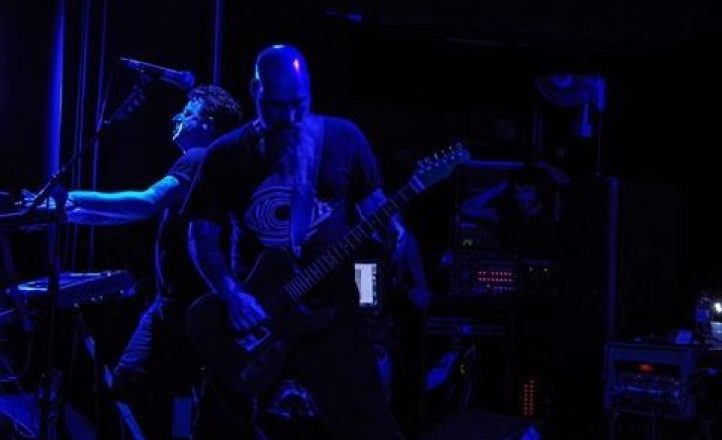 Known for pioneering the post- and experimental metal subgenres — what I like to call “Thinking Man’s Metal” — Neurosis have inspired such bands as Mastodon and Isis, but does their anticipated return to Australia live up to the hype? Coming Down Under in support of their acclaimed 2016 album Fires Within Fires, this is only the band’s second tour of Australia, and their first of New Zealand where they visited before making the dash across the pond. The short answer is yes: they do live up to the hype. Sydney’s Manning Bar exploded as soon as they stepped on stage.

But before I get to the main attraction, I’d like to talk about special guests, and hidden gem, Dispossessed, an Indigenous metal band fronted by well known Aboriginal rights advocate Birrugan Dunn-Velasco. Velasco was in the news recently when he was arrested during an Aboriginal rights rally for setting a fire – to the Australian flag. No doubt, the band’s set was a politically infused one as he spoke about the treatment of Aboriginals and land rights in this country at the behest of at least two racist individuals who exchanged hostilities with the frontman after their set had finished, before being escorted out of the venue by security. “It’s not hard to tell who the racists are in this audience, I can tell you that,” Velasco stated during his speech about two songs in.

I found it interesting that an American group would show such respect and support for our country’s Indigenous people by taking Dispossessed on this tour and giving them nationwide exposure. It’s equally mind boggling that close minded racist skinheads, albeit only a few, would attend a gig such as this.

Politics aside, I had no idea what to expect from Dispossessed’s music. I must say, I think I have become a fan. In the short set they played, maybe twenty minutes of stage time, Dispossessed displayed a highly energetic performance and a musically diverse sound that ranged from a more atmospheric post sound similar to that of Neurosis, to more death metal-inspired tracks and at least one that resembled the heavier side of grunge. Dunn-Velasco has an extremely powerful and volatile voice which is just as adept with clean vocals as he is with screams and growls. The entire band had brilliant presence and a full, thick metal sound despite their lack of a bass player. Dunn-Velsaco is a man not afraid to speak his mind, and love it or hate it, you have to respect him for that. At the end of his set, I gave Velasco a congratulatory handshake on his fantastic set, and did so again later when he asked me what I thought of the show. A great bloke, and a great band that really deserves the exposure. “If you have time to come to this gig,” he said at one point, “you have time to go to an aboriginal rights rally, or you have time to just smile when you walk past one of our mob on the street, instead of turning up your nose and looking down”. This statement really resonated with me.

Now onto the main attraction, post/experimental metal pioneers Neurosis. Simply put, they killed it at the Manning Bar. Such an intimate and perfect venue for such a raw, visceral band. From the moment they stepped on stage there was no bullshit, no messing about. They just played for two and a half hours straight. It was chaotic, as well as being probably one of the loudest gigs I’ve been to in a while. Scott Kelly, WIth a voice as great as sounds on record, Scott Kelly has a great stage presence and the entire band knows how to please the crowd. Steve Von Till took a page out of the Hendrix book of guitar, using the static and feedback from his amp to create a turbulent, atmospheric sound. Jason Roeder performance on drums was intense and technical, and by the end of the set things were being thrown around, kicked, crashed and bashed. Even keyboard player Noah Landis was getting into the spirit, tossing his synthesisers around the stage and hitting the keys with drum sticks. Dave Edwardson made the bass look easy as he grooved around the stage in between swigging bottles of alcohol neatly placed in front of his amp stack.

As deranged as the band’s performance was, it was also extremely focused. They never broke performance, did not break synchronization. It was like they were under a spell, a trance like state where they had nothing to focus on but their music. They’re good at what they do and they know how to do it. However, as thrilling and as loud as their set was, I couldn’t help but think that it was a little bit short. I felt they had room for one or two more songs. But you know what they say: “Keep them wanting more”, and they certainly did do that.

The crowd obviously loved it, judging by the comments I overheard as I was leaving. I don’t think anyone walked away unhappy, except for maybe the two skinheads who were kicked out by security. But what can you do. If you have the chance to catch Neurosis live sometime, make sure you do. Don’t waste any time, just go.