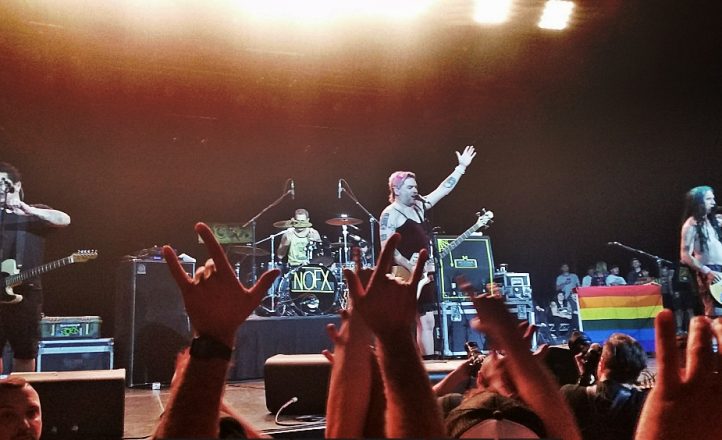 One warm March evening along Anzac Parade, Sydney, hundreds of punk fans and diehards journeyed across the city to converge on the Hordern Pavilion. Main objective? Seeing Californian mainstays NOFX whip up the stadium on their Hepatitis Bathtub tour, named after the band’s 2016 autobiography. Detailing 35 years of ‘fucking up’ is how these rockers would probably put it.

Travelling through the youthful throng of boots, belts and black t-shirts on their way to mosh and party, Sydney’s recently formed Dad Religion beckoned punters into the venue to the strains of blink-182’s ‘The Longest Line’. This punk/rock cover band played a fast and loose set garnished with a typical brand of drunken Aussie humour, featuring members of Frenzal Rhomb. A cover of ‘Judy Is A Punk’ signalled the end of Dad Religion’s set, but not before the singer cheekily launched into a line from Frenzal’s ‘Never Had So Much Fun’, much to the embarrassment of guitarist Lindsay McDougall. Despite a majority attempt to conserve energy, hometown support was still strong and judging from the crowd, Frenzal Rhomb are still the best merchandised punk band in Oz; their range of hilarious parodied t-shirts accounting for this. Maybe it’s their bong-huffing ‘Shane Goes To TAFE’ parody of The Descendent’s ‘Milo Goes To Collage’ you affiliate with, or the tee of Tintin smoking crack. The motley crowd mirrored this subversive sentiment with displays of high mohawks, leather jackets and tattooed heads, plus one case of red polka-dot cross-dressing in homage to Fat Mike.

At 7:15, the fearless females in Bad Cop/Bad Cop made their presence felt immediately in the stadium to exhibit some high-octane American pop-punk. Backed by a full-bore rhythm section, purple-haired guitarist/singer Stacey Dee swung her guitar low and projected a persona not too unlike Joan Jett’s, with tough stage-command and sharp uninhibited vocals. Green-dreadlocked bassist Myra Gallarza was equally impressive with an array of punk jumps and stage moves, adding to a real sense of showmanship. Bad Cop/Bad Cop’s setlist for the night included such songs as ‘Borders’, ‘Nightmare’, ‘Broken’ (an unlikely piece of motivation) and ‘Why Change a Thing’, self-described as “a song for everyone who’s sick of our fucking president.” Gallarza keenly tried to incite two-circle pits in their set, as the Hordern gradually filled to capacity in anticipation of NOFX. This high-performance mood spread infectiously, continued all night and was returned immensely by an ever-ready audience. Ideal song speeds and attitude also remained.

Florida’s Hot Water Music were up next, playing a brawny and melodic set of older crowd-pleasers with some recent tracks from 2017s Light It Up LP. Frontman Chuck Ragan embodied a righteous folk sentiment to drive the delivery of each song, laying his soul bare and wailing like a rougher-edged Bruce Springsteen. Ragan’s ragged voice is a very impressive instrument of itself, with words of his hard-learned life lessons being driven home through a fierce and tireless band. Unlike every other bassist to take the stage, Hot Water Music’s Jason Black played 4-string with his fingers for the whole 11-song set. The band’s humble, every-man approach of plaid and protest was received well by the huge crowd, who kept things hyped with plenty of slam-dancing and revelry. Group characteristics of casual appearance paired with raw, soul-bearing lyrics helped maintain a punk directness whilst in such a big venue. Stacey from Bad Cop/Bad Cop could being seen enjoying herself on the side of the stage, cigarette in hand. Hot Water Music’s personal feel for music could best be summed up in Chuck Ragan describing a track of his as “a simple song about keeping your head up”.

Now it was time for the headliners. Notably understating themselves at gigs, NOFX famously released the live albums I Heard They Suck Live and They’ve Actually Gotten Worse Live, so we’re keen to see how they live up to expectation. After a third short smoking interval, lights grew dim, the crowd grew even more packed, and the tingling of anticipation peaked in the air. A moderate length soundcheck prolonged the urge of excitement as athletic punters stretched and limbered up for a frenzy. Trademarked stage props of a tiny, yellow band logo sign and a gay pride flag-draped keyboard were lifted and set into place. Then, the affectionately nicknamed members Smelly, El Hefe, Melvin and Fat Mike emerged gradually onto the stage to rapturous applause.

To the intro of  ‘The Time Warp’, the ever-charismatic Fat Mike danced around the stage in a velvet dress, swinging his trademark-brown Danelectro bass. El Hefe primed his trusty trumpet and Erik Sandin took his place behind the drums, whilst Eric Melvin roamed the stage wearing only boardies, sneakers and a Les Paul Gibson. A bout of classic stage banter ensues before the foursome launch into ‘Dinosaurs Will Die’ quickly followed by ‘Six Years On Dope’, the first of two new songs for the set. Down on the main floor, the audience quickly erupted into a seething, multi-limbed mass of energy, the able majority yelling lyrics back to the weathered quartet onstage. This backing chorus from the crowd gave Fat Mike more time with to cavort onstage, taking sips from his mic-stand beverage holster, and it was easy to see that NOFX were enjoying themselves.

Existing as genuine articles from a golden American era of punk and skateboarding, certain pieces of stage banter gave us an insiders look into the life of the band, Hefe exclaiming “I’ve just joined Green Day” (N.B. – not true), and Melvin revealing that he and blink-182’s Mark Hoppus like to barbecue together. Fat Mike adds that he and Alkaline Trio/blink-182’s Matt Skiba also enjoy getting together at these barbies to ‘fuck shit up’. Inserted halfway between the speedy thrashers and wry commentary were two groove-laden pieces of stoned reggae, ‘We March tot the Beat of Indifferent Drum’ and the classic ‘Eat The Meek’, dating from 1997 and tastefully stylised with Hefe’s horn.

However, plenty of hits and some deep cuts were still packed in, ranging from recently released NOFX to picks from back-catalogue LPs such as 1992’s White Trash, Two Heebs and a Bean and 91’s Ribbed. Certain tracks generated a palpable level of adrenaline, like ‘Stickin’ in My Eye’, ‘Murder the Government’ and their 1994 anthem ‘Linoleum’ which came before one lone cover; Mark Curry’s ‘Perfect Government’.

Select lucky attendees who got to watch the show from the side of the stage were certainly all thrilled, including one little girl who skipped up and down and punched the air later in the set. It’s endearing to see that age has not mellowed the eternal troublemaker in these musicians, considering all members have now passed 50. Long-legged stage jumps, angst-filled poses and goofy stage antics seem to have maintained youthfulness in the band, even with all the hard-lived lyrics. It’s also a testament to the camaraderie of punk culture to see three quarters of NOFX have remained since 1983. After Fat Mike announced their encore, ‘we’re going to play one more, then go away and play some more’, performing a rendition of ‘I’m So Sorry Tony’ was a heartfelt tribute to No Use for a Name’s late frontman Tony Sly. A personal friend of the band for many years, Fat Mike contemplates. “I’ve never known a better writer or a better guy. His songs wouldn’t just touch you, they would punch you in the eye.”

The concrete floor became drenched in beer as people celebrated in the stomping grounds, an urge to leave punters on a high-note was met through fittingly encoring with ‘Bottles to the Ground’ and a brilliant version of ‘The Separation of Church and Skate’. The latter track begging the hypothetical “When did punk rock become so safe? When did the scene become a joke? The kids who used to live for beer and speed now want their frozen Coke.” Many such beliefs are rightfully put on the line, as food for thought in the future of the genre. With ears still ringing, the final departure of NOFX through the clearing smoke left us with feeling as though we’d been involved in a little piece of punk history. You always get out as much as you put in, but the sheer enthusiasm of Aussie crowds often leaves a mark on international bands in our country, as we had given to the acts tonight. Ultimately, to quote NOFX’s crowd-pleaser ‘Franco Un-American’ as it was heard live, freedom to “hang down low with the nice Australians” is always well enjoyed.