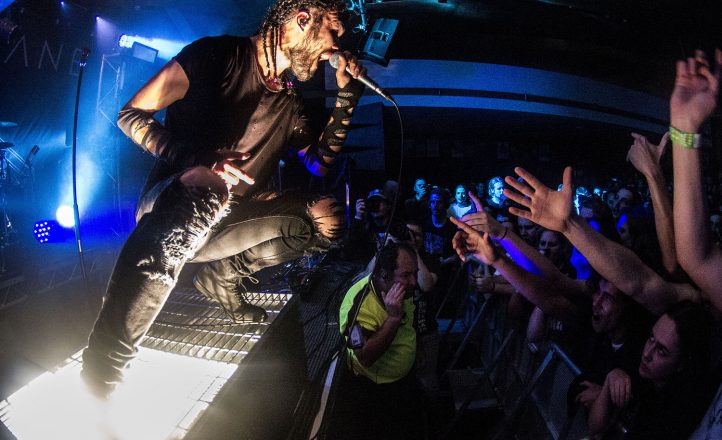 On a cold, rainy night, the best way to keep warm is to share body heat with 800 others who have ventured out to watch some quality metalcore.

Arriving just a minute to late to catch the tail end of Vices, I was greeted with a packed room and soon after, the negative sounds of local deathcore quintet Graves. With every show this reviewer catches of theirs, the more impressed I am. The song writing and stage presence have matured greatly over time, and their evolution has seen some old school nu-metal stylings develop in between riffs and crushing drums.

The moment Canberra five piece Hands Like Houses took the stage a crowd crush of girls pushed their way to the front. Their brand of synth pop metalcore had voices screaming back every word in the face of front man as the three guitarists flicked their dreamy locks of hair about the stage with reckless abandon. The crowd lapped up every bubble of synth driven riffage, with the first crowd surfer of the night riding high on a sea of banging heads. Closing with “I Am”, the crowd sweaty and pumping.

After their killer headline set at Unify Gathering, this reviewer was intrigued to see how the new tracks from surprise release Mesmer would play out. Taking the small stage to the collective screams of the packed room, the five piece ripped into opener “Paragon”, with its chugging riffs and bass driven synth.

The security had their work cut out for them from the get go as bodies streamed over the barrier, especially during mosh heavy cuts such as “Leech” and “Rot”. One poor photographer in the barrier caught the full weight of a crowd surfer that security missed. The tightly packed Uni Bar was a heaving, sweaty mess, the windows had fogged over, everyone kicked it up a notch for “Zero-One” before pushing the limits even further for “Intuition” as a couple of guys launched themselves into the crowd from the stage.

Stage banter was kept to a minimum from cornrows-sporting frontman, Marcus Bridge, except to announce that guitarist Josh Smith would be doing a shoey. After unsuccessfully attempting to remove his own a shoe, a dozen shoes to choose from landed at his feet on stage and said shoey was consumed.  Closing the night with “Quantum Flux” and a smashing encore of “Obelisk”, the room was steaming, shoes were missing, and people were drenched in sweat and good times.