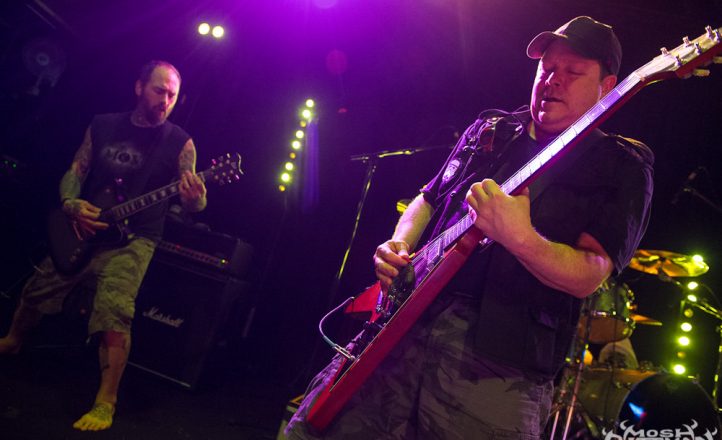 Thrash metal legends Nuclear Assault finally toured Australia but ironically enough just before they pulled the pin on the band. As fans wandered into the venue, eager to catch the unique event, it was interesting to see such a wide range of diverse fans in attendance, from old school thrashers and metalheads to the odd punk skater era fan and even young fans who wouldn’t have been born when thrash metal exploded decades ago.

Starting the evening was Sydney five piece band MurderWorld, who brought some guttural lead vocals on top of their grindcore feel. As their bassist Kaill Leggett added backing vocals, the drumming got heavier and the guitar solos more intricate. Fast rhythm guitar figures were accompanied by hammering drum work that included double bass runs, snare and floor tom hits and muted cymbals before half time sections and even the odd marching beat with the occasional guitar solo to keep thing interesting. They clearly were enjoying themselves and aimed to entertain during their forty minute set with tracks like ‘Sanctity in Ruin’ and ‘Obsession for Aggression’.

The second support band was Adelaide three piece Hidden Intent, who were also allotted a forty minute set. Their bassist front man Chris McEwen played finger style while guitarist Phil Bennett added backing vocals and used the odd bit of reverb on his guitar sound to enhance whammy bar dives. There was some bounce to their straight drumming feel. Rhythms were fast as were the wah-pedal drenched solos with long hair wafting across the high frets as the McEwen side threw horns to the crowd. Some of the vocal screams had that old thrash metal style reminiscent of Exodus with fast snare drumming to boot. Airing their newer track ‘Apocalypse Now’ had floor toms and bass rhythms against sustained chords before speedy thrash ensued. As the bass rumbled away and the guitarist ran in circles and occasionally coaxed feedback from his amplifier they ended their set with ‘Addicted to Thrash’ during which Bennett leapt into the crowd, geeing up fans before the set completed and the house lights were up again.

Support acts done, the stage curtains were drawn. Soon enough, though, on walked Nuclear Assault, about to go about their gig. Frontman John Connelly took centre stage as his partner in crime, bassist Dan Lilker, strode on with his bass hanging low. Opening their set with ‘Rise From the Ashes’ from Survive, bright white lighting columns were almost blinding as heavy drumming locked in, played almost effortlessly with fast cymbal work, double bass assaults and ferocious blast beats. A couple more tracks from Survive with ‘Brainwashed’ and ‘F#’ delivered similar content including solos over fast blasting drums and acerbic, confrontationally blunt choruses with screamed vocals and the odd atonal riff.

‘New Song’ from Handle with Care synchronised thrash with time signature dynamics and feedback squeals for added tension alongside barked vocals as the bass and drums continued hammering. ‘Critical Mass’ showed off some bluesy tinged metal soloing that soon became fast whammy bar warbling a la Slayer. ‘Game Over’ changed pace a tad with a rhythm figure that slowed to an almost Sabbath-like dirge before returning to the main riff. ‘Butt F**k’ was violently spat out, albeit an abridged version that oddly changed into some slow blues ahead of more drum blasting. ‘Sin’ from Game Over had a very early Bay Area thrash style punk feel with plenty of trade off guitar soloing. Similarly, ‘Betrayal’ notched the drumming pace up as vocals had a slight operatic aspect initially, instead of fast, blurted out vocals.

Lilker kept things moving with an instrumental interlude as Connelly was forced to re-stringed his guitar at one point. Nick Barker’s drumming continued to pummel but the mix was out a tad as the lead guitar was now more audible than Connelly’s. At this point, it was also evident that there were one or two crowd casualties whose issues were self-inflicted due to over indulgence and security swiftly dealt with them.

Nuclear Assault soon redeemed themselves with a vengeance from their technical issues. A bunch of tracks from Game Over were spewed out with utmost speed. A stage invader briefly appeared but didn’t hang around too long; Lilker flipped them the finger. Closing the set for the first and last time in Sydney, ‘Technology’ was unleashed. The descending riff soon changed into a grinding, blasting sonic onslaught. Done and dusted, Nuclear Assault provided a sharp, focused, brutally tight 75 minute set. One you won’t see again.