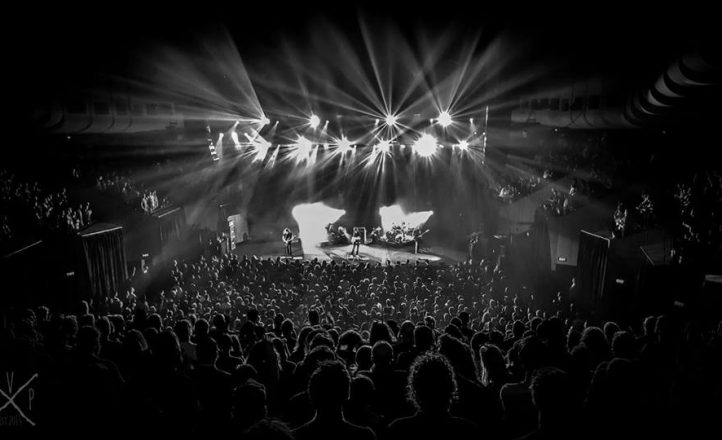 Once in a while a special show happens that goes beyond a concert and becomes an event. Such was the expectation of tonight’s An Evening of Sorcery, Damnation and Deliverance performance by Opeth at one of the world’s greatest theatres. An impossibly long line for the one-off merch snaked from one end of the building to the other while the over-pricey bar was only selling horrible generic full-strength stuff and Coopers Light for some reason so it looked like a dry gig for this audience member.

That wasn’t really a drama, because there was no need for alcohol to enjoy this show. The lights dimmed with the jaunty pipe organ sounds of ‘Sorceress’ filling the room as Opeth swung into the first half of what was to be an epic set. I have witnessed this band live on several occasions now, and it has to be said that this evening, in our hallowed Opera House, they were astonishing. Early on, Mikael Åkerfeldt admitted that the band rarely actually remember any of the shows they play except the special ones, and it seemed clear they were working to make this one very memorable indeed.

As their songs sprawled across the theatre, the band were, of course, totally on-point. Martin Axenrot was impeccable and unlike during their last Sydney visit, Åkerfeldt’s growls carried all their required power. The sweeping arrangements with their transitions from heavy and dark to light and ethereal seemed perfectly at home in a concert hall built for symphonies. Between songs, Åkerfeldt was a charming and funny frontman, entertaining the crowd as much with his wit as with the music as he explained the meaning or titles of tracks and albums, dealt with hecklers and reminisced about dancing with Agnetha from ABBA. The first act showcased a track each from all of their albums except the first two (“I don’t remember those songs” Åkerfeldt quipped at one point), culminating naturally with ‘The Drapery Falls’ rising and crashing around the house, Opeth building the climax to a suitably towering crescendo before departing the stage for a brief interlude.

With the silence, half the crowd swept outside to once again line up for shirts but the intermission was so short that the band was back on stage playing ‘Windowpane’ before most of them could get back inside, and the theatre was still partly empty when ‘Death Whispered a Lullaby’ was well under way. Åkerfeldt made a joke about that too as he led the band through what was essentially the first half of Damnation, then a tale about stealing the title of the seldom played ‘The Master’s Apprentices’ from that of the Australian rock band. If that was a rarity, the next song was a downright hidden gem: the magnificent ‘By the Pain I See in Others’. Being aired live for only the fourth – and, Åkerfeldt promised, the last – time, it was this track perhaps more than all the others that tonight epitomised the Opeth experience of darkness and shadow, harmony and heaviness.

The announcement that there would be only one more appeared to be met with resignation from some of the crowd, which just goes to show how enthralled and enraptured the audience still was despite the fact the band had already been on stage for more than two and a half hours. There was no guessing that they would close with their most performed song, ‘Deliverance’ but in this environment and on this occasion it was almost like seeing them play it for the first time. There are no words to describe the level of brilliance Opeth was at tonight and it’s unlikely to be matched again for a very long time.