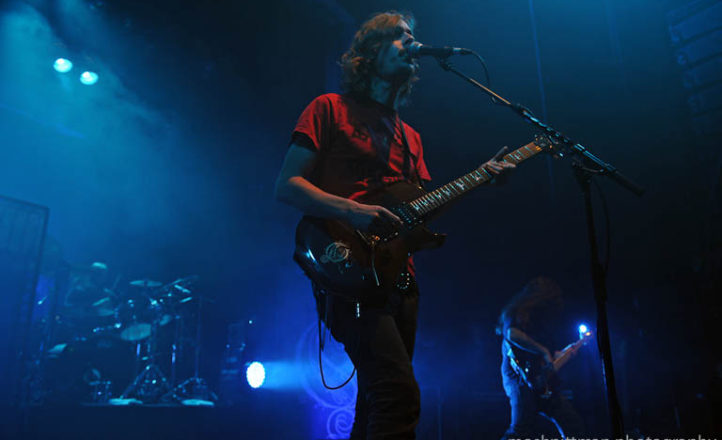 Sunday is an unusual night for a show in Sydney but that didn’t stop an almost-sold out crowd from filling the Enmore Theatre for one of metal’s finest on the first night of their Australian tour. Mikael Akerfeldt had promised this writer that it would be a heavier Opeth this time around, and they did not disappoint on that front.

The room was already pleasantly crowded when sleepmakeswaves entered the arena. At the tail-end of a global tour, they reported their excitement at being chosen to open for Opeth in front of their home crowd. Their bouancy echoed in their performance as they steered through a rock solid set of expansive, sometimes ethereal instrumental rock that captivated the audience from beginning to end – no mean feat for a band that uses no vocals and non-linear song structures, but that’s part of the pure talent of this group.

When the lights dimmed again, Opeth came on to a warm ovation and without a pause eased into the Pale Communion track ‘Eternal Rains Will Come’ and from that moment Sydney was hooked. The first rousing cheer came with the opening notes of Blackwater Park‘s sprawling centrepiece ‘The Drapery Falls’, Opeth’s intricately crafted masterpiece of darkness and light enveloping the room. Mikael Åkerfeldt’s growls didn’t seem to carry in the mix as well as his cleaner vocals did, however, an aspect that occured through the performance. His banter was as amusing and informative as always, though, taking the time to explain the title of Still Life was borrowed from the Maiden song and a Van Der Graaf Generator album before pointing out “I didn’t know it was a form of painting because I am Swedish and don’t give a fuck.” That served as the intro to ‘The Moor’ as Opeth swept through an expansive setlist drawing from every album except Orchid – ‘Advent’ and ‘April Ethereal’ probably came as a shock to some of those who came to the band’s oeuvre within the last decade or so while also a pleasant tonic for any of those still pining for Opeth’s heavier past.

‘Elysian Woes’ set the tone for the wonderful ‘Windowpane’, a genuine crowd-pleaser and one of those transcendent connections between audience and performer; a track that perfectly exemplifies the creative arc that Opeth has travelled. Sweeping epic ‘The Grand Conjuration’ closed the set in suitably majestic style, with all the band’s colours coming to the fore.  Although Åkerfeldt’s roaring growls did seem somewhat blunted throughout, in every other aspect this was a truly consummate performance from a masterful group of musicians, with a show and sound to match. ‘Deliverance’ was the one and only encore, with Opeth sending the crowd home on a high note from one very very fine live show from a band that simply never disappoints. Opeth was superb.