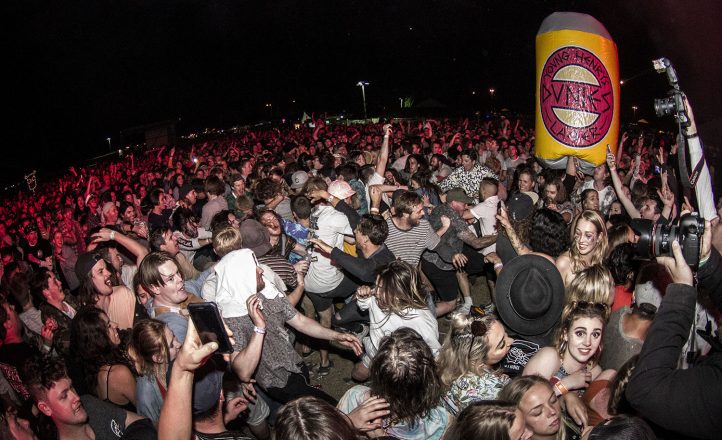 DAY ONE:
Another beautiful day in the Gong for sun, surf, tins and good tunes at Yours & Owls weekender. First act of the day is the amazing Ruby Fields. Bubbly and fun, the early crowd got their dance on. Taking the time to point out her parents only came because The Preatures were performing, Fields’ rocking Triple J favourites ‘P-Plates’ and ‘I Want’ rounded out the opening set.

Late replacements WAAX hit the stage hard, caustic guitars and that powerful voice from front woman Marie DeVita impacted heavily. A killer cover of Courtney Barnett’s ‘Pedestrian At Best’ got the early crowd pumped. Definitely a band not to be missed.

Back at main stage, Ali Barter brought the tunes and kept those good times rolling. ‘Cigarette’ had punters singing along as the sun shone down on Stuart Park. Taking the stage to the excited screams of a gaggle of girls in the front row, and the cheers of hundreds more heard clearly over the strong breeze blowing, Alex Lahey and band serenaded the afternoon crowd with her fun filled tunes and golden voice. A huge smile across her face as the festival crowd chimed in on every track. Watching this, I wish every day was the weekend.

A quick dash across to the Rad stage and a sizeable crowd had gathered to watch the AFL grand final. A chant of ‘Fuck the Crows’ was in full swing as Richmond took the lead, and eventually the win.

Main stage was a crush of punters as post punk Novocastrians Trophy Eyes kicked into gear with ‘Home Is’ opening up the pit. A severe lack of security at the stages saw multiple crowd surfers caught by photographers in the pit or those unlucky few hit the ground hard. ‘Chlorine’ finished out the set with a warning from Floreani that there weren’t any security and to crowd surf at your own risk. US rockers Waaves kept the energy pumping over at the Forest stage, and what little security around were kept busy with fence jumpers. The perfect soundtrack for a festival by the ocean, their brand of surf punk had the crowd punching the air.

In complete contrast to the long haired rockers, the Donny Benet Show Band followed after. Dressed in a tacky pink suit, Donny Benet and band intrigued some and wowed others with their upbeat lounge songs. Described to this reviewer as “a personal joke gone a lot further than expected”, Benet certainly had folks talking.

As the sun began to set, the wind died down and the moon rose above the ocean, North East Party House took the main stage to screams of thousands. The chill set and setting sun provided the perfect vibes as dozens of bouncy balloons danced their way above the crowd.

With Stuart Park in darkness, it was time to dance, with DJ duo Cosmos Midnight bringing some mighty jams to the plate. The crowd shook their thing, filling the barrier and overwhelming what little security there was at the Outta Space stage.

Yours & Owls alumni The Preatures packed out the main stage, front woman Izzi Manfredi resplendent in all white, rocking out a set of hits, with the whole audience on their feet or on shoulders. “I Know A Girl”, “Somebody’s Talking” and the massive sing along that was “Is This How You Feel” had punters singing as one.

It seemed as though the entire festival had turned out for Brisbane nutters Dune Rats. The boys rarely disappoint and this was no exception. A solid set of short, punchy tracks like an uppercut to the ears, complete with giant inflatable beer cans, manhandled about the crowd. “Six Pack” and “Scott Green” kept the circle pits running ragged. The guys and girl from WAAX joined them on stage, as well as busting out Frenzal Rhomb’s “Never Had So Much Fun” during the pit inducing “Dalai Lama”. A killer set from the long haired yahoos.

Closing out an incredible first day of tunes and tinnies in the ‘Gong, metalcore stalwarts Northlane destroyed the Outta Space stage. Punters were going ballistic in the pit, “Citizen” and “Leech” upped the ante, with crowd surfers streaming over the barrier, realising there wasn’t anyone there to catch them.

A light show fitting of the stage name fired off strobes and lasers as screamer Marcus Bridge did his best to tear the place apart. Finishing up the night with the massive one two of “Quantum Flux” and “Obelisk”, the sweaty crowd definitely earned themselves a rest before a jam packed Day Two.

DAY TWO*:
Raucous collective The Pinheads started their set with frontman Jez Pinhead dragging his feet into position, listlessly wandering around the stage, and leaning into the mic like he’d rather be anywhere else, today it seemed like we weren’t going to get our moneys worth. These first five  minutes were enough to deter Pinhead newcomers from sticking around as noticeably a few punters grew bored and wandered off. Just as it seemed like the band were stuck in gear, Jez started climbing the side stage scaffolding, his demeanor still as if he was just going through the motions, but it was enough to send onlookers into a frenzy, the crowd picked up their feet and the rest of the set was fully charged with the energy of Jez’s death defying antics.

Totally Unicorn never disappoint with their aggressive let loose party mosh vibe and this set was nothing short of perfection. Within the first few seconds frontman Drew Gardner was over the barrier thrusting himself face first into the increasingly eager crowd. The stage hands really had their work cut out for them today as not only did Drew spend most of his time in front of the stage barrier but deep in the mosh starting most of the circle-pits that had the crowd going nuts. Both guitarists found themselves in the pit at least once each throughout the set if not climbing up on the stacks to shred their heavy licks. Just as it seemed that couldn’t get any better than it already was, Lindsay ‘The Doctor’ McDougall of Frenzal Rhomb fame joined them on stage to play out the rest of their set, making this the highlight for many punters fortunate enough to witness the pure orgasmic madness that most fans come to expect.

The hugely anticipated A.B.Original hit the stage just as the day’s heat started to dip, the festival numbers noticeably picking up in the thousands as these guys were clearly the pulling force. Briggs and Trials commanded the stage, passionately spitting their deeply political raps to beats that had every person within earshot moving their feet, stopping between songs to remind their audience of the atrocities Indigenous men and women face daily, the crowd following their lead chanting “No justice, No Peace”. These guys truly didn’t disappoint, blasting their Triple J hit ‘January 26’ echoing their message of indigenous oppression and surprising punters with guest vocalist Caiti Baker!

International punk sensation Le Butcherettes packed a massive punch to the punters lucky enough find themselves at the Out of Space stage, vocalist Teri Gender Bender opened the set with a brief unaccompanied melody on her keyboard whilst chanting in her Spanish native tongue, both confusing and enthralling anyone lucky enough to catch a glimpse. There was not a single dull moment in their set following as Teri’s powerful stance and almost possessed dance moves had everyone jaws dropping. Near the end of their set she climbed down from the stage to get closer to outreaching fans, pushing more power into her high energy antics, screaming into the mic, throwing herself backwards not once loosing her footing. Crushed it!

As darkness closed in on Yours & Owls, At The Drive-In took the stage, awash in blue light, launching into the bombastic “Arc Arsenal”. Flailing guitars, roaring drum beats and eclectic frontman Cedric Bixler-Zavala pushing as hard as his body would let him. Midway through Interalia cut “No Wolf Like The Present” Cedric was in the crowd, surfing and screaming as the bodies rushed forward. The twisted mosh heavy set transcended into the night, Omar Rodriguez-Lopez shredding as if in a voodoo trance, closing with the colossal “One Armed Scissor”, the crowd heaving and sweaty.

Capping off what has been another epic year for Yours & Owls was crowd favourite The Presets, commanding the attention of the festival with their pulsating beats and incredibly catchy lyrics, they truly proved that their brand of electro-pop isn’t going away any time soon. Amidst the darkness you could see glow-sticks scattered through out as if these punters had prepared to rave it out to the party night club anthems. Classic bangers like ‘Kicking & Screaming’, ‘Are You The One?’ and  ‘My People’ engulfed every onlooker with a overwhelming sense of euphoria, perfectly closing what was arguably the best Yours & Owls to date.