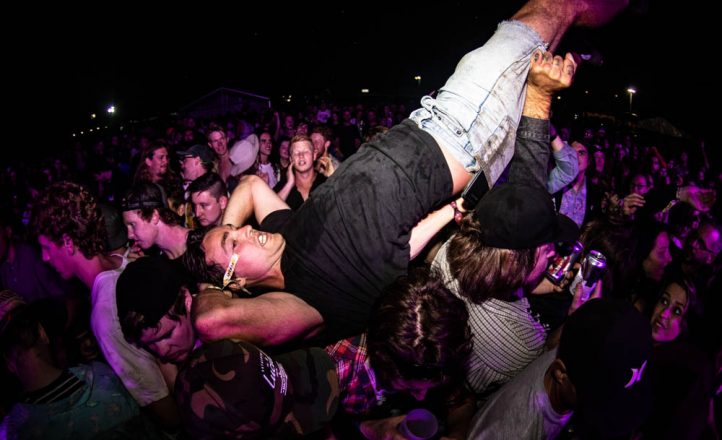 The long weekend: three days off, the NRL Grand Final draws sports fan to their televisions, and Wollongong’s Yours and Owls Fest draws music fans to the beach side for two days of music and arts.

With an overnight shower putting a dampener on things, the grounds were slowly getting squishier as punters flooded through the gates. Local rockers The Pinheads kicked things into gear with some high flying rock n’ roll, using every available amp stack as a launch platform, the seven piece getting the crowd going.

Home town heroes and champions of inner west pubs, the boisterous party hardcore of Totally Unicorn tore the Owls stage apart. Burly frontman Drew Gardner spends more time in the crowd than onstage, rubbing sweaty bellys in the pit, only stepping back over the barrier for a quick drink at the onstage Tiki bar, courtesy of the guys from Ceres. Sorry, 33 and an extremely long beer bong all part of the party.

Over at the main stage, singer/songwriter Angie McMahon graced the stage with full band, and massive cheers from the crowd as one excited patron flashed the singer from the shoulders of her partner. Slow Mover, Keeping Time and radio favourite Pasta had the early crowd singing along.

The best kept secret at Yours & Owls is consistently the Rad stage, as Darwin heavy hitters Tapestry had the small pit banging away. Slick post hardcore with that melodic emo tinge, frontman Tom Devine-Harrison laying on the floor, amid piercing screams and some heavy bottom end from the Top End five piece.

As the sun warmed up the grounds, the beach air wafted across Stuart Park and the festival fashion was on show like an episode of Ru Paul’s. Sparkling costumes, jeans and bikini combinations and of course, a T-Rex wandering the festival. Chilling out at the Rad stage, a yelling intro of “Do you love pasta!?” herald eclectic duo Tuff Mustard. One as a Mexican wrestler, the other clad in spaghetti and meatballs with such classic tracks as Meaty Morsels and Fuck Off rocking the smiling, laughing crowd.

The short changeovers at Rad stage meant that by the time this reviewer collected a beer from the bar, punk upstarts Legal Aliens had hit the ground running. Vicious front woman Mal Function spat fiery lines through an aggressive sneer, with bassist Stacey Shipton holding down the rhythm for the short, sharp bursts of hardcore punk. Joining the mosh pit, Mal head butting her way through a dozen songs in as many minutes.

First gracing the Yours and Owls stage early in 2016, now playing the sunset time slot, the gorgeous Vera Blue, resplendent in a flowing, fluro gown. Her fiery red hair and soulful tones resonate on the summer breeze. Regular Touch, All the Pretty Girls and her latest slab of pop sensibilities The Way That You Love Me drew a huge crowd of singing, smiling festival goers.

On the other end of the spectrum, the heaviest band on the bill, Burn in Hell were stomping the Rad stage into submission. With a brutal bottom end, bolstering bass drops and shredding guitars, the stage may have been small but the riffs were monstrous.

A brief reprieve in the billing took this reviewer to the Das Schmelthaus stage, with the sun dipping low, the smoke filled rave cave was packed with punters, dancing like no one was watching, sunglasses firmly wrapped around their bulging eyes.

Featuring only a meagre four guitarists among seven members, Adelaide rockers West Thebarton took every riff and beefed it up four fold. Dirty, sweaty and impassioned, West Thebby rocked the socks off the Yours and Owls crowd, the kids may have been at Ruel but the real rock was being cranked here.

With night set in, Saturday’s first headline, the enigmatic Amy Shark graced the stage to the screams of almost the entire festival. Flanked by her name in six foot letters, Shark led us through hit after hit from her debut record Love Monster. Mess Her Up, I Said Hi and Psycho, sadly not featuring Mark Hoppus , had the audience singing every word back. Her Triple J charting hit Adore dedicated to all those who saw her play in small venues on her first visit to the Gong wrapped up the warm, headline set.

Usually a hard slot to draw people away from the headline acts, Adelaide rockers Bad // Dreems treated the masses to a non stop rock n roll show, complete with special guest Zach Stephenson, one half of local heroes and label mates Hockey Dad. Mob Rule, Gutful, Double Dreaming – the guitar riffs kept coming, frontman Ben Marwe sinking tins between tracks. Harking back to the glory days of 70’s rock of The Angels, Lobby Loyde and Cold Chisel, the crowd rocking the hell out of the Gong for Cuffed and Collared.

As the bass heavy beats of Golden Features played on the main stage, many punters headed out to the nearby pubs to continue to rock the night.

Day two of Yours and Owls Festival is always a doozy. The hour lost from daylight savings never helps and the hours lost and forgotten at the after party and campsite sessions are even bigger killers. Nonetheless the crowd were out in force, attempting to shift the hangover to another day.
The cheeky Steel Town duo The Gooch Palms took no time at all warming up the crowd, and I do mean cheeky as guitarist Leroy Macqueen stripped down to barely a strip of cloth. His old fella making a brief appearance to cheers and jeers, thank goodness this is an over 18’s crowd.
Charging onto Your stage like a bull in a china shop, Brisbane’s WAAX hit hard with a mammoth crowd for the early afternoon set. The crowd crush pushed forward as Maz ran the stage for F.U, jumping into the arms of the front row. Meanwhile in the pit, ninjas back flipped and one girl crowd surfed on a boogie board, pandemonium ensued. The raucousness of Labrador proved once again why these guys are front runners for best live band in Australia.
Rebranded as a four piece after the departure of two long time members, Melbourne’s Ocean Grove brought that odd world metalcore to Stuart Park. Wicked beats, grimy riffing and a rapping snarl from Dale Tanner, the circle pit was firing on all cylinders. With the crowd crouched down, OG gave us a filthy cover of The Presets banger My People, Tanner singing from the pit, closing up the set well over time with Ask for the Anthem.
With a bit of time to spare before the endless run of the nights sets, this reviewer took some time to find a feed, get some beers and chill out on the couches near main stage, taking in the sun, sounds and surf breeze, festival season has certainly begun.
Rising star in the world of Aussie hip hop, from the nation’s capital, Genesis Owusu invited us to join his ‘rap goons’ as the rapper, flanked by dancing ninjas pumped out a well choreographed set of rap jams. Nonstop jumping, giving a pogo stick a run for its money, the crowd kept pace in the afternoon sun.
Over in the Rad Bar tent, recently reformed Gerringong surf rockers The Bungalows drew a sizeable crowd to the small tent. With a sound befitting the location, the bouncy tunes had everyone up and dancing, a collection of police officers nearby bopping along to the likes of Killer and Here I Am.
Running onto the main stage in a cloud of smoke, Byron Bay trio Skegss saw majority of the festival hanging out, drinking tins and climbing shoulders. “How the heck are ya Wollongong!?”. Up in the Clouds, Road Trip, and Got on My Skateboard were perfect summer sounds and beer drinking music.
A song like Spring Has Sprung certainly epitomises the exact nature of a festival like Yours and Owls.
A staunch favourite in the Illawarra scene, having supported some of the big names of Aussie rock, Crocodylus had a sweaty, packed Rad tent bouncing away. Groovy indie rock, these guys are gonna go far.
As the sun dropped behind the hills, a choice was to be made, Frenzal Rhomb or the football grand final. With a sizeable crowd jammed into the Jeb Taylor hotel watching the Raiders V Roosters in the big screen, punk mainstays Frenzal Rhomb gave the rest of us updates on the score. Their prediction of Raiders scoring 47 points wasn’t to come to fruition but nonetheless the banter was top notch.
With a long history of songs to choose from, fans were treated to all the best, 5000 Cigarettes, Ship of Beers and the always rowdy Punch in the Face. There’s no doubting Frenzal, they may not be the best musicians, but they never fail to put on a killer punk show.
While everyone else was at main stage for the big finale, dancing their asses off to a complete history of 80s, 90s and 2000 chart and club bangers courtesy of party DJ Hot Dub Time Machine. The stage thumping with bass, every girl on the shoulders of friends and partners, smoke cannons and fireworks, the party raged. On the other end of the spectrum, Canadians Fucked Up raged to a small but dedicated crowd at the Owls stage.
Fast and furious, burly frontman Damian Abraham spared no time getting to know the audience up close and personal. Bathed in red and blue lights, at times blinding, the six piece never let up the intensity. David Comes to Life destroying what little energy was left of people.
As the fireworks shot overhead from Main Shane, signalling the end of two immense days of music and beers, it was really just signalling the start of festival season.