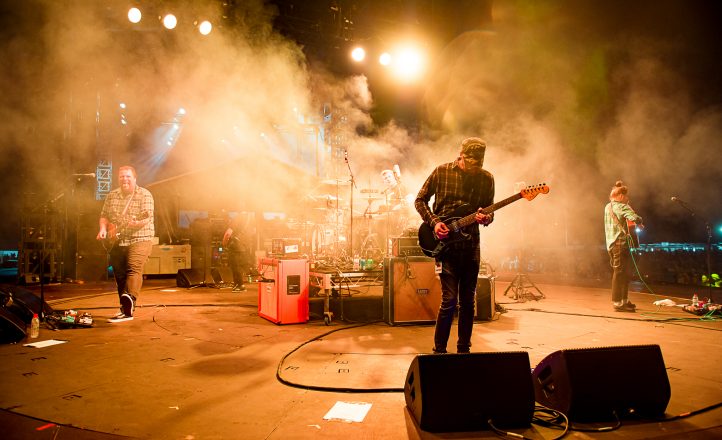 We’re back baby! Festivals are back! Well, almost.

As the first official full capacity festival in Australia in over twelve months, Wollongong’s Yours and Owls Fest had a lot riding on its successful execution. A 600 page COVID safe plan was drafted, the festival was split into four sections (more on that later), and two 360 degree rotating stages guaranteed everyone got to watch.

Despite the lack of events for the past year, day one was a little slow to start, punters drank in parks and fields nearby before slowly wandering in. Swathes of police lined each of the four entries, somewhat intimidating but just like old times at a NSW festival.

First up, the double header of Nerve and JK47, joining forces to spit out some of Australia’s fiercest rap. Reese’s Pieces, Came for the Lot, The Recipe and the damn delicious Sunday Roast got the Saturday crowd up and dancing.

Politically charged and fast paced with reckless abandon, Melbourne punks Clowns took the stage in a whirlwind of hair and ripped denim. Hard as nails, ball tearing riffs and a howl like wolf in the woods, many in attendance were blown away by the pure fury. Taking a moment of clarity, frontman Stevie Williams asked anyone in attendance to take care of their friends on drugs, in the process demanding state leader Gladys Berijiklian be held accountable for all drug related festival deaths: “She has blood on her hands”. The heavy factor at this year’s Yours and Owls festival was certainly lower than previous years, but Clowns more than made up for that.

One act who made full use of the open stage and most definitely clocked up more steps than anyone else this weekend were Canberra ladies Haiku Hands. More high kicks, more choreography, more classic dance moves than any other act. With the beats and the smoke machine pumping, Fashion Model Art, Jupiter and the twerktastic Squat shook the crowd right outta their seats. South coast locals The Vanns brought their smooth guitar pop melodies as the afternoon sun shone off their rugged long locks, lots of whooping and whistles from girls in attendance. Fake Friends and a cover of Bon Iver’s Hey Ma, their off kilter brand of soft rock totally in flavour with the mostly Triple J listening audience. The band have come along way since playing in backyards in Kiama.

Not just a kick ass street in Melbourne, but a kick ass Melbourne band, The Smith Street Band took great delight in the rotating stage, smashing out huge mosh worthy hits I Still Dream About You, Young Drunk and Shine to a crowd that were champing at the bit to get in the mosh. Security were getting a tad antsy about the impending crowd crush, and they were right to do so. Their first time back at Yours and Owls since one of the first iterations of the festival, Wil Wagner and Co smashed out a roaring rendition of Death to the Lads; thankfully, not a shoey in sight.

As the sun set over the escarpment, and the last rays of sun flittered away, beers flowed freely and security, unprepared, were in for a rowdy night.
Winston Surfshirt were next on main stage, this reviewer chose that time to instead peruse the food stands. Choices were limited as food trucks were divided up between the four sections. After deciding upon a fresh chicken wrap, I sat back and watched as the set was constantly stopped by the ‘angry festival dad’ to tell punters to dissolve the mosh pit and return to seated areas. Threats of festival closure fell on deaf ears, as this back and forth would become common place for the remainder of the night.

Replacing New Zealand’s Benee as flights between the countries were not yet established under the new trans Tasman bubble, Byron Bay folk troubadour Dope Lemon spun tale after tale, as well as spinning around the stage. Hey You, a slow droll of a tune set the tone for the set, smoke and lights cut through the cool air of the beachside festival. Punters were mostly well behaved, swaying in time to the chill vibes dished out by the husky voice of Angus Stone.

The cold air didn’t seem to faze the majority of punters there, festival fashion dictating the look high above the need to stay warm. Zebra print is in this year, that brown, stripy festival shirt is out.

Going from strength to strength, DMA’s have been on a roll, their Splendour In The Grass live stream reaching millions, their third album The Glow charting at number 2 and their Triple J cover of Cher’s Believe one of the most streamed Like A Versions. Security were fighting a losing battle from the outset, trying to keep 12000 people in their seats and not form a mosh was akin to stopping a flood with a paper cup. Multiple times the set was stopped to plead for punters to calm their dancing feet. Nonetheless the band pushed through, The Glow, Delete, Criminals and the ballady Lay Down completing the set.

At no point has LOUD ever made mention of Australian super star Tones and I, this reviewer was hoping to keep with that, opting to check out Randy Knuckles on the Rad bar local stage. Unfortunately due to the complete disregard for social distancing at the main stage, the Rad stage was shut down early, meaning this reviewer had little choice but to catch the headline act.

From the streets of Byron Bay, to the main stage of Yours and Owls, flanked by groups of masked dancers, utilising the 360 degree stage, the pop star rattled off hit after hit, Never Seen The Rain, Johnny Run Away and a cover of Flume’s Drop The Game. Once more stopping the show, ‘Angry Dad’ called out Peach zone for being the main perpetrators, chants of “Fuck you Peach” would continue throughout the weekend. Making it to the closer, mega hit Dance Monkey with minimal stoppages.

By the time final act, What So Not graced the stage, the vibe had well and truly worn off, the chastising and set stoppages were too much, people jumped fences to get closer to the stage, refused to sit down and dawdled when told the show would not continue. WSN, tried to ramp things back up with a new track featuring rapper PHI11A but the steady flow of people was enough to tempt this reviewer, happy in the knowledge that after twelve months of naught, Yours and Owls had pulled off the impossible.