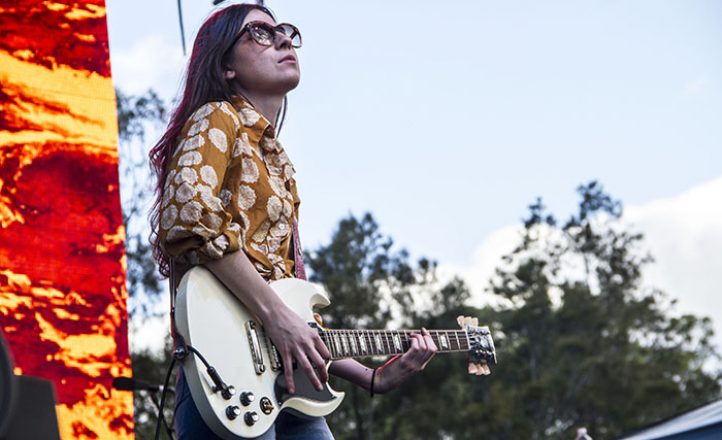 Festival season has started early this year and judging by the weather, so has summer. A perfect sunny day for some great live music.

Because it was so nice this reviewer may have spent too long by the beach drinking tinnies, so may have missed a few opening bands. Making it into the festival ground of Yours and Owls birthday extravaganza I caught the four sisters that are Brisbane’s Stonefield. A rollicking good time with some huge grooves and party rock n roll, their latest single “Love” getting a lot of love from the crowd.

Over at the main stage, Melbourne MC Remi got the floor jumping with his slick rhymes and dirty hooks. Sure the wind kicked up a bit but no one noticed as the mid arvo dance floor pumped it up.

Looking very jet lagged, US rapper Antwon called the people to his presence, some very heavy jams and some sweet melodies, mostly about getting his dick sucked, had some jumping and others heading back to the Coopers bar to catch the final minutes of the AFL final. On any other day Antwon may have drawn a bigger crowd, but he appeared exhausted.

Back at main stage, Kilter were dishing out some serious tunes. Electro beats, dirty rhythms to get the crowd amped, and some serious summer time guitar licks. The afternoon crowd getting their dance on in the afternoon sun.

Exploding out of gates, the fireball that is Sampa The Great hit the stage running with her killer style of wicked rhymes and beats. Though she is tiny, her presence is huge, spitting pure fire and getting the party cranking as the sun set over the lagoon, Triple J favourites ‘Blue Boss’ and ‘Black Dignity’ going down a treat as darkness descended.

Main stage was packed for a Tom Tilley-less Client Liason. The trio brought it back to the late 80’s with their fun lovin’ corporate synth pop. Ill fitting suits, fake ferns and fax machines had the crowd bopping along, with girlfriends on the shoulders of boyfriends; the air was electric with good vibes. This is the band to talk about on Monday around the water cooler.

Home town heroes Hockey Dad kept those good vibes going over at the Jeb Taylor stage. The two piece playing to one of the largest crowds they’ve had, including plenty of mates front row heckling guitarist Zack Stephenson, all in good fun. The hype around this duo after their Like A Version of ‘Malibu’ is huge, with tracks like ‘Seaweed’ and ‘Laura’ favourites.

Ladyhawke was having some sound issues on main stage, with the band constantly asking for guitars to be turned up before the sound completely cut during ‘Paris Is Burning’. Whilst sound was being rectified, a stage invader grappled with roadies and security before being dragged out the gate. Finally sound was restored and the band finished their set with ‘My Delirium’.

Roaring into the night, the rock n roll greasers The Sonics had one of the rowdiest moshes of the day. For a band from the 60s they played hard and fast and the crowd followed suit. ‘Strychnine’, ‘The Witch’ and the Richard Berry cover ‘Have Love, Will Travel’ kept the rowdiness at top gear.

As the night set in, all of those in attendance who wore very little in the hot spring sun, were now starting to feel the cold night air, front row at The Jezabels was the place to be. Vocalist Hayley Mary was on fire tonight, with her melodies soaring into the night. ‘Come Alive’ and ‘Pleasure Drive’ providing a huge crowd response, with more and more people on shoulders and just a great vibe from the crowd. Security got to enjoy the show as well.

Headlining the JT stage, recently reformed hard rock trio, COG set the night ablaze with more smoke and lights then a Michael Bay film. Opening with the epic ‘Doors’ this set the tone for one intense hour of prog rock. The three piece never missed a beat as the audience raged around them. ‘My Enemy’ as always garnering a raucous response.

Meanwhile the majority of the almost sold out day one festival crowd were rocking along to Ball Park Music. The awesomely titled ‘Everything Is Shit Except My Friendship With You’ was dedicated to us, the people, and fan favourites ‘Fence Sitter’ and ‘She Only Loves Me When I’m There’ went off.

With some fireworks in the distance, that was the end of day one of Yours and Owls, the party continues into the night and the cleanup begins for another day of shenanigans.