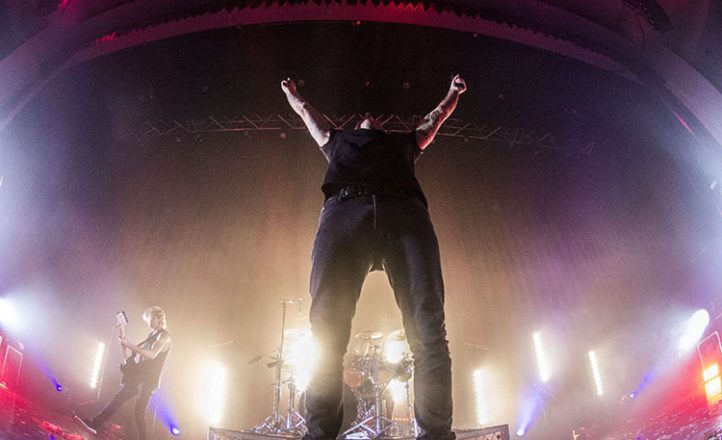 Despite the near zero air temperature, the line for entry snaked its way around the UOW car park, huddled together for warmth and eager to get inside.

Once inside, Wollongong locals Graves were getting the crowd nicely toasted. The deathcore quintet have matured greatly since the last time this reviewer saw them, both in song writing and stage presence. Gone are the synchronised squats and tough guy personas, instead a precision machine with some hard hitting chops, big riffs and pounding bass drops. A good start to the night.
Tour mates on this All Aussie Adventure, WA’s Make Them Suffer stormed the stage, blowing away all before them and ramping the crowd energy up to eleven.
Opening with a crunchy number in ‘Widower’ the six piece outfit served up a set of melodic, synth driven metalcore. Security were given a warm up to the main act with several punters surfing their way over the barrier following the first circle pit of the night. Closing out with ‘Blood Moon’ the crowd parted to form one solid wall of death, coming together in glorious Spartan fashion.
The between set playlist had the entire crowd singing along to the likes of Journey, Queen and Bon Jovi, but as the lights dropped, the chants of ‘Destroy!’ rose as Byron Bay hardcore powerhouse Parkway Drive opened with ‘Destroyer’. The floor was an instant circle pit as the hard hitting five piece tore through the lead track as confetti and streamers exploded out.
‘Dying To Believe’ and ‘Carrion’ absolutely ripped into the crowd and the crowd responded, with dozens upon dozens of punters streaming across the barrier. One guy even brought his own blow up mattress to make the surf all the more comfortable. It was obvious that the intensity had upped to unbelievable highs, the smile plastered across Winston McCall’s face could not be wiped.
‘Vice Grip’ had arguably the biggest sing along, with the full house chiming in. Older tracks ‘Idols and Anchors’ ‘Karma’ and the crushing ‘Boneyards’ kept the energy flowing, with great plumes of smoke firing high and the pit in full swing. A moments reflection and a shout out to local Brett Connellan who was attacked by a shark earlier in the year, Winston reminding people to take care of each other and that charity shirts are for sale at the merch desk.
Ending the set with the blistering ‘Bottom Feeder’ and the closing refrain of “FUCK!” Seconds later the boys are back on stage to destroy with the fast paced ‘Crushed’ and the brutality that is ‘Home Is For The Heartless’. Despite the run time being close to 70minutes, it is never enough, especially when a Parkway Drive show is always of the highest calibre.