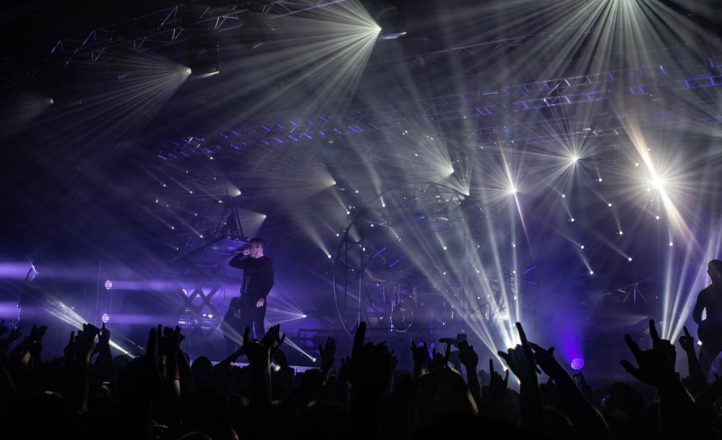 The Hordern Pavilion was in capacity mode for worldbeaters Parkway Drive on the second hit out of their national Reverence tour. With friends and mentors Killswitch Engage along for the ride and the kind of production normally reserved for their European shows, this biggest Australian-headlined metal tour of the year certainly held plenty of promise.  The entry lines moved pretty freely through the security gates and the merch stalls were already doing swift business, and despite the occasion there seemed to be an air of casualness about  the crowd as they moved inside.

Thy Art is Murder are now of course headliners in their own right, very recently off big tour around the US and Australia themselves, but more than happy to take to the stage first this evening, and precisely on time. With such a brief time on stage, the band had to deliver from the first moment and the notoriously outspoken CJ McMahon stuck to the program as they ploughed through choice cuts from their three most recent releases. They used their time well, presenting a short set of crushing immensity with clarity, dynamics and astounding heaviness. The only real deviation from the music was organising a wall of death for an enthusiastic moshpit halfway through, a warm up for what was to come. Going off their performance tonight, Thy Art is Murder thoroughly deserve the success they are enjoying.

Hitting the stage promptly to time, ‘Rose of Sharyn’ served as an opener for Killswitch Engage, the band one moving kinetic force from that moment. Jesse Leach plays the straight man to Adam D the clown, shit-talking his own band and throwing shapes at the crowd throughout the set. Their show was a solid hour of their prime melodic metalcore classics with the crowd in full voice alongside Leach and Dutkiewicz, Mike D’Antonio throwing his bass skyward as he and Joel Stroetzel criss-cross the stage. On any other bill, Killswitch Engage could have been headlining here and judging by the response they got and the following they evidently had, the metalcore pioneers would have done very well doing that.

There could be no mistake, however. Tonight belonged to Parkway Drive. Following a playlist of Aussie rock standards that had the audience singing almost as loudly as KsE had been, when the room lights went down and the stage lights up, it was clear we were in for an extravaganza. Short of AC/DC, I’ve never seen an Australian rock band with such a lavish stage production. Draped head to foot in black, the band stood before an intimidating wall of lights, scaffolding and flame pots, with drummer Ben Gordon inside a huge rotating drum cage.

‘Wishing Wells’ opens the set as Winston McCall takes his place centrestage and the Hordern goes immediately apeshit, each new song turning the crowd into a seething, singing mass. Banks of coloured lights blazed from the stage, white beacons dazzled the crowd and fireworks and flash pots erupted in a sensory assault. The pyro bill for this show alone was probably more than most bands’ entire touring budgets.

But this wasn’t all show and no go. Parkway Drive have matured as song writers, musicians and performers. A band that once would have not even entertained the thought, after the barrage of furious metal that is ‘Absolute Power’, ‘Cemetery Bloom’ becomes a piece of theatre, McCall dramatically intoning the lyrics until the rest of the group chimes in for a segue into ‘The Void’. Two songs later, the singer calls for a restart to ‘Karma’ when the circle pit he demands doesn’t come up to standard – then it does, as most of the floor in front of the Hordern stage becomes swirling humanity. It’s a big room, and this is a big pit. For a final piece of arena metal showmanship, Parkway Drive pulled out all the stops for the encore, a grand finale of fire and flame with Gordon turning cartwheels in his drumming cage. Fireworks bring down the curtain on a huge night for a rightfully huge band, a band that has grown up, with fans that have grown up right alongside. Once considered a ‘gateway’ band for those dipping their toes in metal, Parkway Drive have now gone through the gateway – and taken their fanbase along with them. This was an outstanding spectacle.