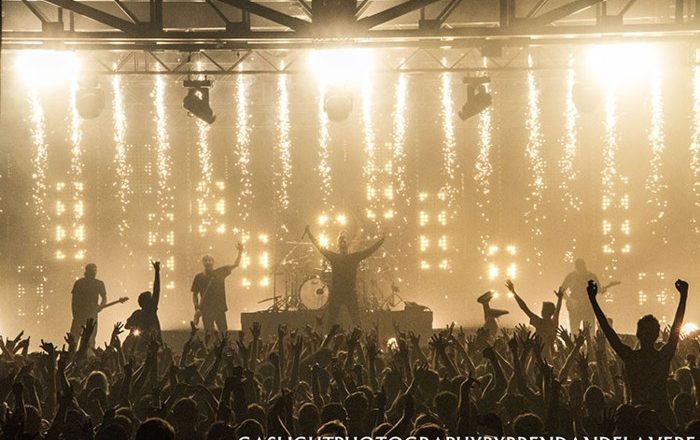 In the ten plus years I’ve been a fan of Byron Bay quintet Parkway Drive, I’ve seen them go from strength to strength, playing to fifty people in youth centres to thousands of people in huge arenas, and with their fifth full length release, their best and most divisive record to date, there is no stopping the tour de force.

Due to the early starting time, I missed out on US metalcore crew The Word Alive, but the venue was already teeming with people there to catch the early openers.

On only their second tour to our shores, Texan metalcore five piece, Memphis May Fire have already garnered a huge fan base Down Under, and the southern gentleman didn’t disappoint. ‘My Generation’ and ‘The Sinner Vices’ proving crowd favourites that got the circle pit frothing. Front man Matty Mullins, less outspoken than on previous occasions, let the music do the talking. Melodic synth driven metalcore, breakdowns, crushing harmonies, you name it, the crowd loved it.

Replacing Suicide Silence, who have an unfortunate track record of having to cancel Australian tours, are arguably the heaviest band on the bill: Thy Art Is Murder. From the moment the five piece stepped on stage, the room oozed with the sound of brutality. ‘The Purest Strain Of Hate’ reared up early, setting the bar for high energy mosh pits. Outspoken front man CJ McMahon urged the crowd to make the security work for it, also taking time for a shout out to his fiancée and father in law who were seeing the band for the first time. ‘Coffin Dragger’ and the brutal ‘Holy War’ showcased an emphasis on song writing, rather than breakdowns and bass drops, and with a wall to wall circle pit, it could be forgotten that they were not the headline band that night.

From playing to 50000 people festivals in Europe to just 500 in their hometown, it’s easy to see that Parkway are most at home on stage no matter the crowd. But when 5000 punters are chanting your name, you’ll give it all you’ve got. Appearing from behind an immense banner in a puff of confetti, PWD destroyed, opening with ‘Destroyer’ from new release Ire, the crowd already knew all the words, screaming along.

Not slowing for a second, a double punch of ‘Dying to Believe’ and  ‘Carrion’ decimated all before, multiple circle pits opened up around the hall, legs and arms flailing wildly as security were kept busy with waves of crowd surfers. TAIM guitarist Andy Marsh, replacing the injured Jeff Ling, was forced to learn fifteen songs in less than two weeks, and it was almost impossible to tell, as he ripped through ‘Dark Days’ and the neck snapping ‘Karma’.

Though online hate for first single ‘Vice Grip’ was rampant, it has surely cemented itself as a crowd favourite with the entire audience lending their voices to the refrain. Pyrotechnics during ‘Bottom Feeder’ brought another level, as the track was brought to a close with a resounding “FUCK!!”. Closing the set out with ‘Romance Is Dead’, it’s hard not to raise your spirit fingers high and play an air solo, along with everyone else in the room.

Returning minutes later, Winston lighting the room with only a flare, the band crushed those last reserves of energy like a vice with the nu metal tinged ‘Crushed’ and destructive ‘Home is For the Heartless’, leaving all of us wanting more as pyro rained from the ceiling.