Home > Live Reviews > The Poor & Palace of the King 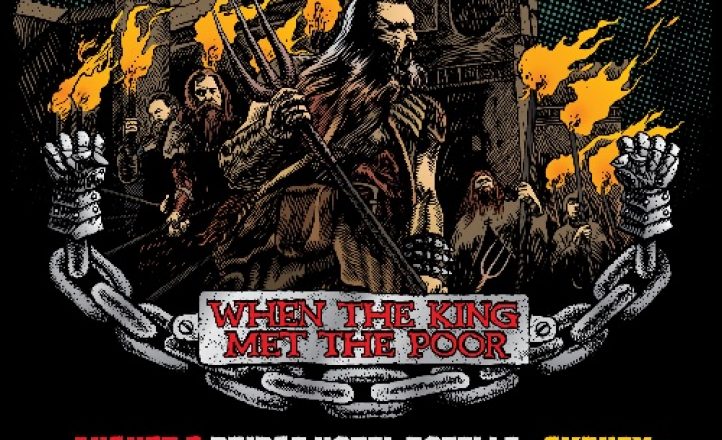 Ambling down to inner west venue the Bridge Hotel is always an interesting activity. The over development and gentrification of the area is more openly obvious with certain aspects still in varying levels of decay amongst the incredible wealth that co-exists within the realm. So, there really isn’t a more fitting venue for a hard as nails band such as The Poor to dig their heels in and deliver a kicking set to the faithful punters.

Some, such as this reviewer, had perhaps not seen them live since their regular stints with bands such as The Angels at beer barns like Selinas alongside The Screaming Jets and Rose Tattoo. Once they hit the stage, it was a time warp as they trotted out a bunch of road weary classics plus some newer material for the older fans to catch up on.

Kicking off the show and tour dubbed ‘When the King met the Poor’ tonight was the very capable and unashamedly retro band Palace of the King. Fronted by a hat wearing Tim Henwood on both vocals and guitars, the band were up and racing on a stage set up with beaten speaker cabinets, vintage amplifier heads and a nice Nord keyboard for some extra Seventies vibe. Opening with the swagger of ‘Take Your Medicine’, it was retro hard rock with a groove from the start. As co-guitarist and keyboardist Sean Johnston ripped into his Telecaster, the rhythm section held down the fort. Bassist Anthony Licciardi sported a velvet coat, red pants and with a Gibson Firebird offered some walking bass lines to add to the groove and solid backing vocals.

Second track and newer single, ‘One Of These Days’ had an early, meat and potatoes, blues based AC/DC feel plus some slide guitar parts and third song ‘Another Thing Coming’, introduced by a drum figure, had some snappy, keyboard runs. More Seventies vibe came from bursts of harmonica from Tim and during parts where keys and lead parts featured, he’d retreat to the drum riser, locking in with the rhythm section. An obvious understanding of stage dynamics even on a small stage was evident from the experienced musician who has graced many a stage.

A whip fast rendition of ‘No Chance In Hell’ morphed into a keyboard and rhythm section jam that had a punter requesting ‘Space Truckin’’. That was followed by a cracking Get Right With Your Maker track ‘I Am The Storm’. The rhythm section locked in with the guitars as keyboard parts swirled through the brooding, vocal lead track. Old track ‘Black Heart’ brought some tasty shuffling blues rock with harmonic and plenty of slide guitar. ‘It’s Been A Long Time Coming’ from the latest album offered up a strong chorus bolstered by solid rock guitar riffs and benefited greatly from a reprised riff sections fingerpicked for extra dynamics. Heavier material allowed some extended solos, a dash of falsetto vocals, flourishes of drums fills and interesting pedal effects to add to the grooving hard rock style. ‘I Swear on My Life’ rocked the crowd with country-infused hard rock and a catchy chorus. Closing their set with debut album track ‘Free’, Palace of the King delivered a rousing, barnstorming rock and roll with the band hammering through the track with a march like attack. One hour of pure, undiluted rock and in the perfect venue for it. Nice work.

As the backdrop for The Poor was revealed, the band wasted no time in setting things up and kicking off their set. Commanding rock veteran front man Anthony ‘Skenie’ Skene, in denim battle jacket and with hair flying, addressed the crowd as Zep-shirt wearing guitarist Julian ‘RV’ Grynglas casually started the riff to  early track ‘What I’d Do To Get a Piece of You’ on his blue, Southern Cross adorned guitar. Skene’s gravelly vocals and stage presence is still intact after all these years of road work and performing. The four-piece were driving into the songs with workmanlike precision from the start as the rhythm section of five string bassist Matt Whitby and drummer Gavin Hansen pounded through the set.

Backing vocals during the choruses and some nifty guitar solos were backed with rhythm guitar during numerous songs from Skene who would alternate between prowling the stage with the microphone to singing and cranking out chords. The no-nonsense rock of ‘Blood’ from Round 2 quickly followed the punchy ‘Liar’ from their high charting 1994 debut album, Who Cares. Repeating the alternating album selections, a slightly initially shaky ‘Man of War’ soon found driving rock power and feed nicely into the fast paced, chorus driven track, ‘Trouble’.

Another newer track followed with ‘Black N’ Blue’, introduced by a howling scream from Skenie and saw Grynglas again leaning into his guitar as he peeled off fast, expressive solos and building tension with climbing octave parts. ‘Hair of the Dog’ offered a change of pace, some barking noises and pinch harmonics. Typical ribbing stage banter ensued as did some tequila shots and a few select barbs at the music industry powers to introduce the short, sharp punch of ‘Kill My Faith’ from Round 1. Old debut album track ‘Downtown’ followed and was a cracker of a track, full of hard rock energy and some impressive vocals.

From then on in, it was a time travel experience with a bunch more tracks from the classic debut album. The chugging power of ‘Ain’t on the Chain’ barrelled into an energetic ‘Dirty Money’ with some AC/DC-like finger picked guitar parts in the perfectly executed quieter sections. It was cool to see Skenie and Grynglas facing each other and riffing away during ‘Tell Someone Who Cares’, showing the camaraderie is as strong as ever.  Closing the main set, the boogie of ‘Only the Night’ ripped through quickly as Skenie jumped up onto the bar and sang the song back to the band.

After a brief break, it was the encore of ‘Poison’ and their big hit, ‘More Wine Waiter Please’. Tonight’s crowd wasn’t huge, but those in attendance were treated to some top grade hard rock from experienced musicians who will continue to play to their loyal following, regardless of trends. Get along to this tour for over a couple of hours of quality hard rock.
What I’d Do To Get a Piece of You
Liar
Blood
Man of War
Trouble
Black N’ Blue
Hair of the Dog
Simple Livin’
Kill My Faith
Downtown
Ain’t on the Chain
Dirty Money
Tell Someone Who Cares
Only the Night
—
Poison
More Wine Waiter Please